The life of any comic book hero would be a lonely one if not for the many characters who have made up their supporting cast. Just as Superman has Lois Lane and Batman has Alfred, Booster Gold has also shared his adventures with quite a few people over the years. Today we look at one of those, his mother.

Today is Labor Day in America, a holiday to celebrate those who helped ensure that we don't have to work on holidays. Do you know who still has to work holidays? Mothers.

Mothers never get days off. It's a tough job, made all the tougher when you're poor, single, and have twin mouths to feed. That's true today, and will still be true for the mother of Michael Jon "Booster" Carter and his sister Michelle in AD 2462 Gotham City.

The birth name of Mrs. Carter remains a mystery to the public record. Her last name was borrowed from a man who turned his back on his own family, and her children always call her "Ma." But what's really important is that she loved and supported her children, even the conceited one who played college football. 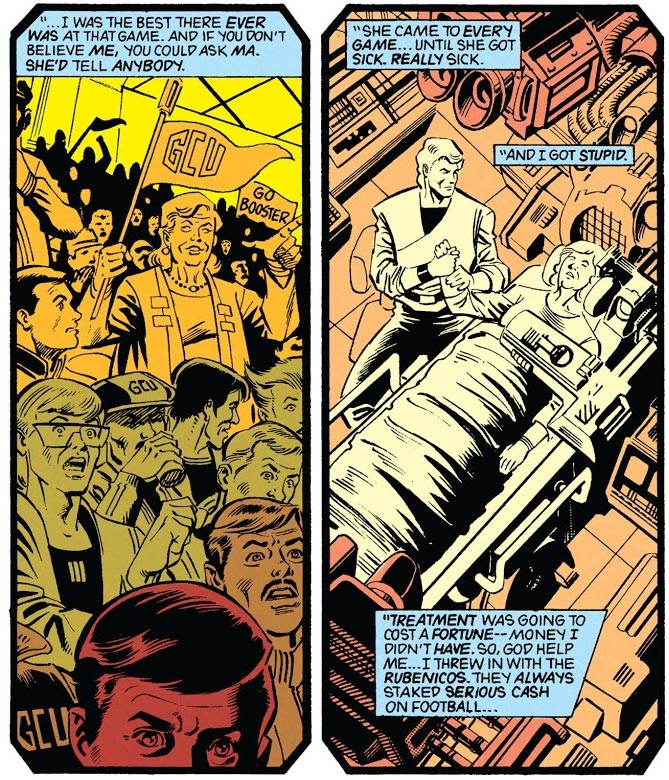 When Ma got sick, can anyone blame Booster for turning to a life of crime to ensure that she got the treatment she needed? Isn't that what any good son would do?

And when Ma found out her son had cheated to pay for her treatment, can anyone blame her for being disappointed in him? Wouldn't every good mother hope that she had raised her children better than that? 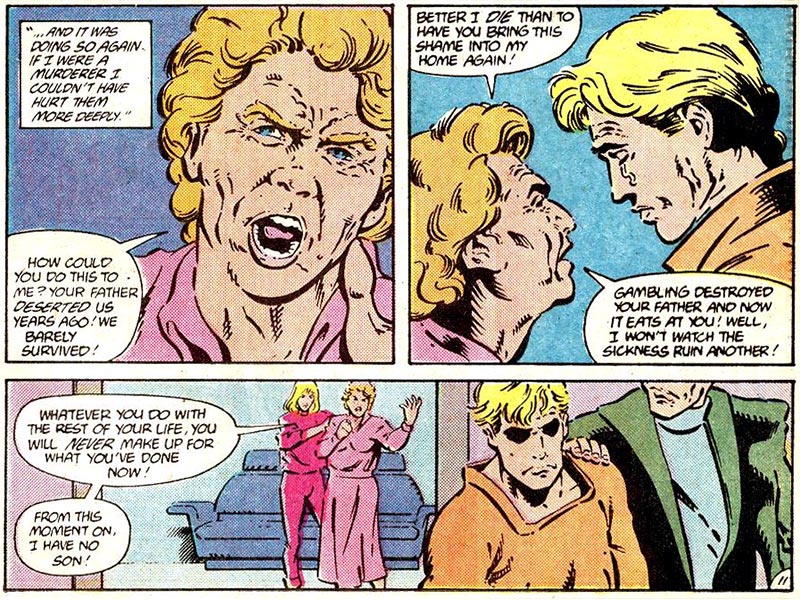 Sometimes, when we're angry, we say things we don't really mean and can't take back. Booster Carter wouldn't even get the opportunity to try. To distance himself from his mistakes, he made the fateful decision to steal a time machine and runaway into the past. By the time he found a way back, it was too late.

There could be no reconciliation. Tragically, Ma Carter would never learn of her son's heroic self-redemption.

Or wouldn't she? Nothing is as straightforward as it seems in the life of a time traveler.

While Booster would live his life believing that he had missed his opportunity to set things right, fate had other plans. Years later (from Booster's perspective), an attempt to keep Superman from doing unintentional harm to history resulted in an accidental trip back to the Gotham City of 2642. Thus Booster Gold was given a rare a second chance to clear the air.

If you get a chance this holiday, maybe you should call your mother.

ithildyn posted on Sep. 6, 2021 at 12:01 PM
Booster's backstory and world from the 24th century always rubbed me wrong, I won't lie. It's like the Jetsons : the writers simply wrote their current society on a sci-fi decor with pretty much no effort of imagination about how things might have changed, societally. Women still take their husband's name and are expected to marry; getting healthcare costs money out of pocket without a safety net; everything about football college being the same but with visors and stuff; and so on. The same capitalistic, patriarcal, heterosexual, white-centric, etc. norms as the day it was written. I understand how, at the time this backstory was written, the straight WASP-y male writer(s) arrived at that picture of the future for their targeted audience of people like them, but it still is a bummer how little risk was taken, how little imagination was put into it.

I honestly reconcile it by telling myself 24th century Gotham/the United States is some sort of enclave that clings to it's past values and glory days and live purposely "in the past", kinda like the Amish people, while the rest of the world has moved on somewhat. It surely still has problems and inequality and prejudices and whatnot, and maybe in most of it capitalism is still alive and kicking, but at least it'd not have stagnated for 300+ years neither.

So Booster is still a fish out of the water when he goes back in time because things have changed a lot in the 24th century anyways, and the picture of the past people had is never perfect, but he's a lot better prepared for it by his way of life that tried to emulate and cling to the golden age of heroes and the American people.

At least in my mind.

Boosterrific [Official Comment] posted on Sep. 6, 2021 at 4:17 PM
In this case, "the writers" is mostly Dan Jurgens. And Jurgens is aware from the beginning that his future isn't as progressive as it could be. It's baked into Booster's backstory. But ​it's not strictly bias and carelessness that makes it so.

Jurgens provides an explanation for these societal failures in canon. In BOOSTER GOLD v1 14, Rip Hunter recognizes the future society's stagnation and blames the setback on nuclear war, an era being explorered in HEX, a contemporary DC title set in 2050. It is very much a devistated dystopian world like you'd find in a MAD MAX movie.

By the time Booster gets to college, they've only been playing football again for about 60 years.

You can't write commentary about the failures of a society if you don't provide examples. If Booster Carter had lived in a Utopia, he wouldn't have needed to run away from it. 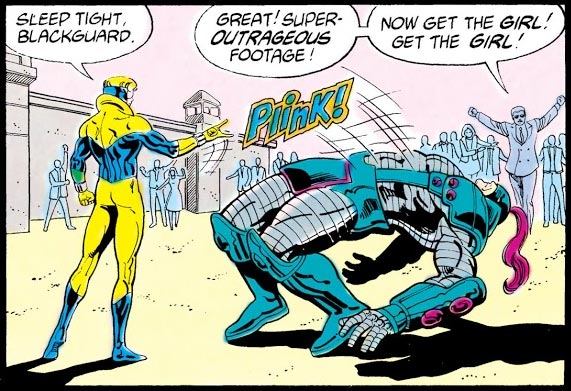 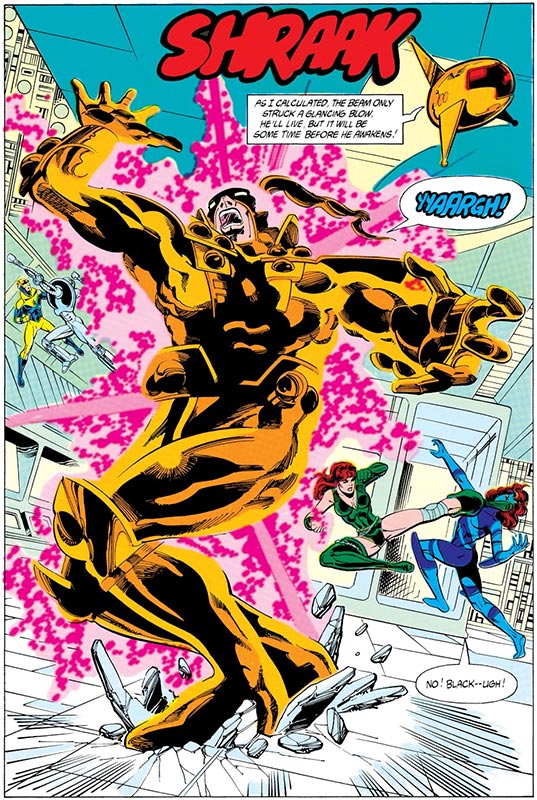 Not even a pandemic can keep Cort Carpenter's Booster Gold sketchbook closed. Take a look at his latest additions: 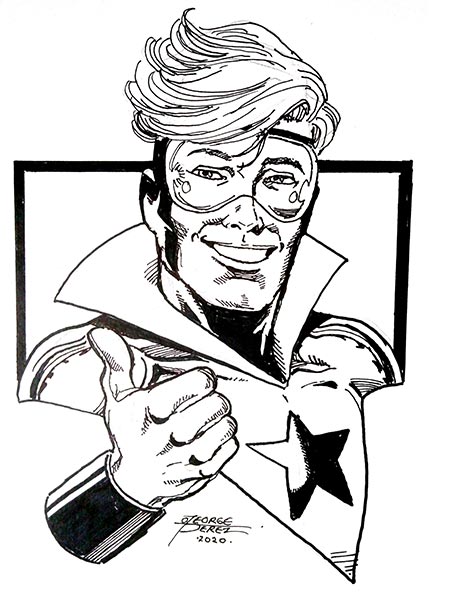 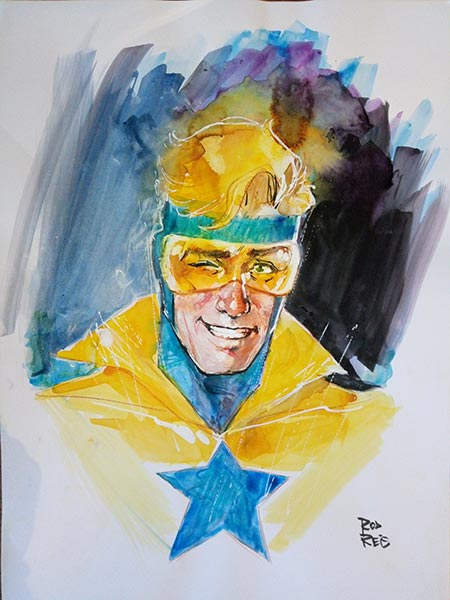 Not a stinker in the bunch! (I could probably use that last one as one of my corner box images.) You can see all these and more at imgur.com.

Stay safe, Cort. No matter what else happens in 2020, the sketchbook must survive!

And yes, Galloways is excellent, and he was such a nice person to reach out to and get a piece from. Absolutely recommend it for anyone else.

In a few months to years end I have 10-11 more commissions coming, excited to see them and share them with other Booster boosters.

First there was The Blot. Then came Cort and Steven. And now there's Susan! 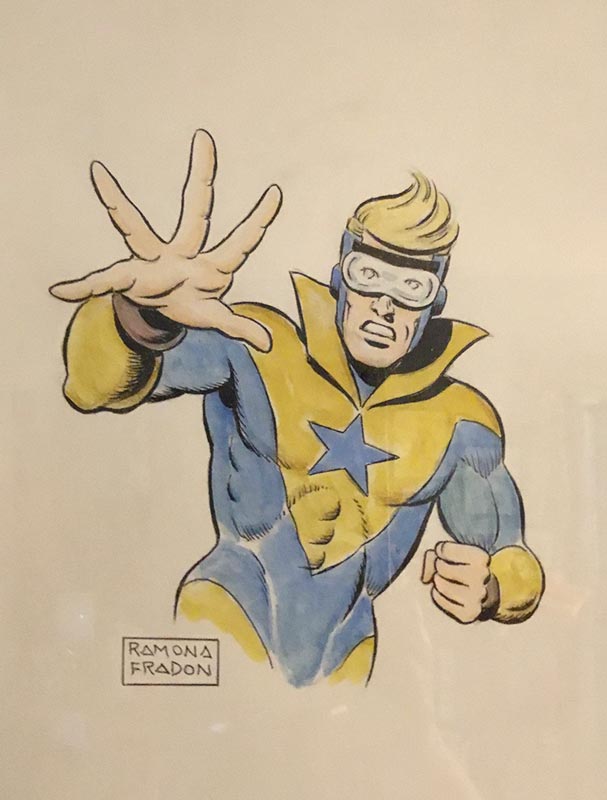 Those are just a few of what Susan has posted to her Flickr.com account, so I encourage you to click over there for a better look around. (Especially that Ramona Fradon. I'm so happy she's drawn Booster Gold.)

Thank you so much for sharing, Susan. That's some Boosterrific art.

Cort posted on Jun. 3, 2020 at 2:58 PM
These are ace! I have seen some of these before! The Fradon one I too really enjoy. Chattier and Shaner are also very keen. Heck, they all are. Thanks for sharing.

But would love to see more!

(Also if the blog title was an intentional pun... kudos)