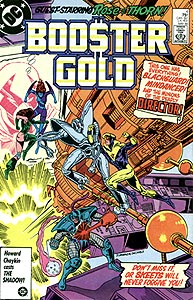 Brief Synopsis: With the aid of Thorn, Booster Gold and Skeets escape from their captivity, defeating Blackguard, Mindancer, and the 1000, to much fanfare.

Issue Summary: Booster Gold and Blackguard are at the mercy of Mindancer in the secret lair of the 1000. Fortunately, Thorn has been following Booster and arrives in time to save the pair.

Elsewhere, unaware of Booster's current predicament, Trixie Collins explores her relationship with Booster Gold in a discussion with her aunt Jennie and her pet fish.

Meanwhile, Mindancer is joined by the Director's android and mind-controls Blackguard into attacking Booster and Thorn. Booster tackles the android, Thorn fights Mindancer, and Skeets battles Blackguard. The fight destroys most of the the 1000's complex before the trio emerges victorious.

Afterwards, Booster is interviewed on the television news-magazine Metro Today. Booster takes credit for saving the day, but does call Thorn his "partner" in the case. The interview is used by Skip Andrews to lure super-star artists Benny and Marty into working on the Booster Gold comic book.

Booster Gold returns to the Goldstar offices as the conquering hero, but is immediately met by representatives of Senator Ballard's tax investigation committee and the Internal Revenue Service for investigation of tax evasion.

Issue Notes: On the cover of the book, Booster's star is colored blue. This is the color that will become the norm for the costume, though it will still be another 8 months (Booster Gold, Vol. 1, #12, January 1987) before his star appears as solid blue on the interior panels of the book.

Page 5, panel 1
Booster Gold and Thorn meet for the first time. This is Booster's first "team-up" with a present-day DC hero. Despite fighting together, Booster will learn Thorn's name not from the heroine herself, but instead from the villain.

Page 6, panel 2
Aunt Jeanie calls Trixie by her given name, Theresa. The name "Theresa" is of Greek origin, refering to the late summer, or harvest season.

Page 15, panel 1
POWER UP: Skeets admits that his visor-projected "Stun Blasts" are weaker than Booster's wrist-projected Booster Shots, explaining why Booster is the superhero, not Skeets.

Page 17, panel 3
POWER UP: Booster uses the bracelet on his left arm to increase his power levels, "channeling the energy back into" himself, making him "stronger than ever!!" For the first time, Booster clearly demonstrates technology-aided super-strength by upper-cutting the head off of the Director's android in one punch.

Page 18, panel 4
POWER UP: Booster proves that he can release stored energy in his costume in an explosive blast, in this case directed at destroying the Director's android. This tactic is apparently dangerously unstable and will be rarely used in Booster's future.

Page 19, panel 7
Booster tells a departing Thorn, "the JLA is begging me to be a member." Unfortunately for Booster, this will never, ever quite be the case. 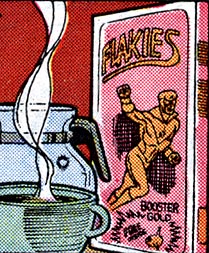 Page 20, panel 2
PRODUCT PLACEMENT: Booster is shown on a box of Flakies. The box indicates that a Skeets toy is "free inside." (Now that is a cereal giveaway that I really, really want.) If it is like typical cereal prize, the Skeets included is made of cheap plastic that requires assembly.

Page 21, panel 3
FIRST APPEARANCE: First appearance of Benny and Marty, respectively the writer and artist of Blaze Comics' Astro Teens comic book. These two characters mimic Marv Wolfman and George Perez, respectively the writer and artist of DC Comic's popular New Teen Titans comic book. Though never a member of the Titans, Booster will cross paths with them many times. In fact, Booster's first cameo appearance will be in New Teen Titans Vol.2 #29.

Page 22, panel 3
Myron and two others representing Senator Ballard and the International Revenue Service arrive to audit Booster Gold for never paying taxes to the U.S. Government. Take note: if you ever become a celebrity superhero, remember to pay your income taxes.

Boosterrific Review: A solid conclusion (of sorts) to the title's first story arc.

This issue is the Booster Gold equivalent of the old standard The Brave and The Bold style team-up comic book. Booster and Thorn join forces to topple the 1000 in what is mostly a very straight-forward "beat-em-up" story. What saves this issue from tedium is the solid demonstration of Booster Gold in action, nods to classic DC Universe continuity, and the contrast between the personalities of the issue’s protagonists. (Booster Gold is a public showboat while Thorn is a behind-the-scenes crusader. They are an unlikely couple to say the least.) If that's not enough, this issue teases the debut of the least used power in Booster’s increasingly complex arsenal: tax evasion.