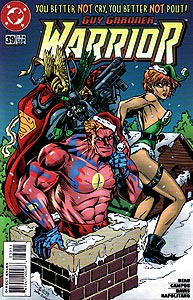 Cover Description: Posing as Santa Claus, Guy Gardner attempts to climb down a chimney with a sack full of presents for various heroes of the DC Universe. Former Green Lantern Arisia poses as an elf nearby. (No Booster Gold.)

Issue Notes: Among the many heroes at Gardner's party are various artists and employees of DC Comics. The guest list is extensive, and includes far more heroes (and villains) than appear on panel with Booster Gold. 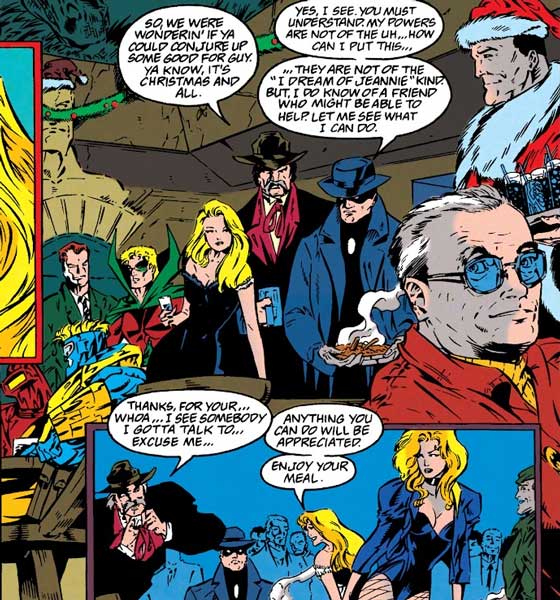 Page 5, panel 5
Booster appears to be sitting at a table with Rocket Red #4. This is the first time that Booster has been seen with Rocket Red since he began wearing armor derived from the Rocket Red suit. Behind Booster, Alan Scott appears to be having a conversation with John Constantine. Nearby, Guy's friends Rita Muldoon and Buck Wargo attempt to negotiate with the Phantom Stranger for a suitable Christmas present for Guy. (The man in the extreme foreground looking at the viewer appears to be Denny O'Neil, writer and Batman Group Editor for DC Comics at the time of this issue's publication.)

Boosterrific Review: Call it a Christmas present, but this issue is rated an undeserved 3 because there are so many character cameos and the heart of the issue is in the right place for a holiday issue. There are some basic grammar errors in the cornball dialogue, the art is awful, and some characters exhibit some downright uncharacteristic behavior with little explanation other than the excuse that everyone is in the Christmas spirit. Even at its best, this just isn't a very good series.

(1 vote)
KMD (Feb. 11, 2010, 10:04:14)
There are some touching scenes here as Guy talks to his dead father and ponders his lost love Ice but yeah there are some flaws. Nice to see a Christmas issue without the obvious Scrooge motif but this did not really work. As great as Guy is, he really works better as a strong supporting character than as an actual lead.