Both Straight Man and Fool

In the comments of my blog post about the single greatest Booster Gold comic ever written (Justice League #4), there was some discussion about when exactly Booster's comic book portrayals turned from fun-loving but competent crime fighter (as portrayed in his own original series) to bumbling moron (as portrayed in 52 and just about everywhere since).

The timing of that change can be narrowed to shortly after the dawn of the 21st-century. No so coincidentally, that's about the same time that Blue Beetle's character also got an overhaul before coming to a very gory end.

Blue Beetle, who during the JLI years always played the fool in the original Blue and Gold dynamic, lost his sense of humor for his inclusion in the 1999 L.A.W. (Living Assault Weapons) mini-series reuniting the former Charlton Comics characters. For a few years following, he appeared much more prominently in DC Comics than his best friend, notably in issues of Birds of Prey, where he was diagnosed with a weak heart and semi-retired from heroics. This allowed his more serious demeanor a chance to take root with readers and editors alike.

I'd always assumed that was why, when Beetle and Booster were reunited in 2003's Formerly Known as the Justice League, the comedy roles of the two super buddies were swapped. However, when I put that question to JLI writer J.M. DeMatteis on Twitter last week, he revealed a different reason. 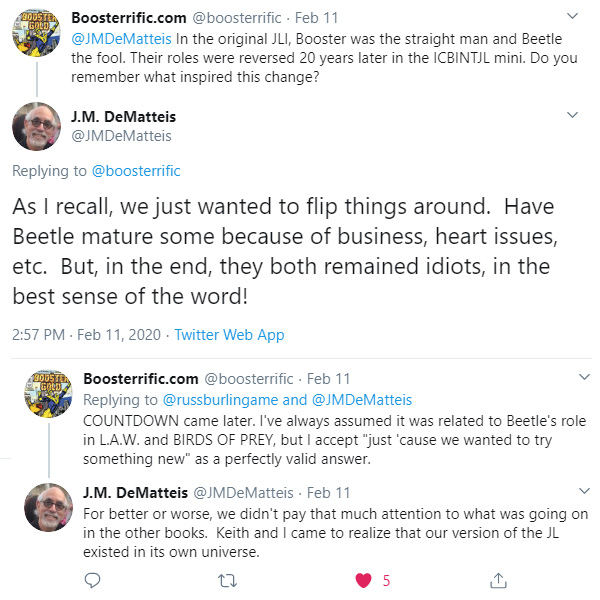 Whatever you think of the change, you have to admit that "just because" is as good a reason as Beetle and Booster ever had for any of their hijinx.

And now you know the rest of the story. (Thanks to Ariel for inspiring this topic.)

Ariel posted on Feb. 19, 2020 at 11:19 AM
Thanks for the mention! I do miss the fun-loving but competent crime fighter booster's characterization.

He Is portrayed as a moron these days :( Damn, the good times ended with the abrupt cancellation of vol 2...

Last week, Ariel dropped by the Boosterrific Facebook page to tell us that the website that used to be Comic Book Resources but is now a series of lists has included both volumes of Booster Gold on Gary Smith's "The 15 Best JLI Books Ever."

Despite the title, the list is actually 17 titles long. (Because lists.) But of those 17 titles, 9 feature a strong Booster Gold presence:

6. Formerly Known as the Justice League

2. "I Can't Believe It's Not the Justice League" in JLA Classified

If there's a lesson to be learned here, it's that it's almost impossible to have a Justice League International without Booster Gold. That's a pretty good legacy.

To read what Smith had to say about each title, visit CBR.com. Thanks to Ariel for sorting through the lists and bring this to our attention.

Ariel Justel posted on Jan. 23, 2017 at 2:45 PM
The thing that surprised me the most was the high position assigned to Booster Gold Volume 1. Is this series finally receiving the recognition it deserves? :)

Brady Kj posted on Jan. 23, 2017 at 9:15 PM
I already knew you can't have a Justice League International without Booster Gold.

Special Guest Star in This Issue? It's Thor!

My favorite part of running Boosterrific.com is discovering things I've never seen before in comics that I thought I knew. For example, just this week Ariel Justel dropped by the Boosterrific Facebook page to point out something I must have missed in my two dozen or so readings of Booster Gold, Volume 1, #6: 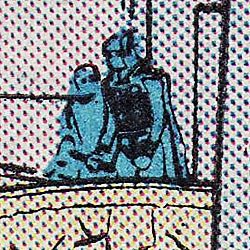 That's Thor walking through Metropolis' Centennial Park in the background of page 2, panel 1! I thought I had looked pretty hard at these pages, but I never realized that the little blue blob was Marvel Comics' Mjonir-toting God of Thunder until I broke out a magnifying glass to confirm Ariel's sighting.

What other Easter eggs has Dan Jurgens hidden in the original series that I'd never spotted before? Now I have a whole new reason to read my Booster Gold comics! Thanks, Ariel.