Cover Description: Below the Blue Beetle's Bug, clockwise from top right, Mister Miracle, Black Canary, Martian Manhunter, Guy Gardner, and Captain Marvel fly from a destroyed cityscape toward the viewer. Shattered pieces of the cover to Justice League #1 can be seen on the bottom left. (No Booster Gold.)

Brief Synopsis: In an alternate future, Captain Atom stands against a team of tyrants inspired by the legend of the Justice League.

Issue Notes: As with all 1996 DC Comics' annuals, this issue is an Elseworlds' tale of an alternate world. The Booster Gold, Captain Atom, and Lord Havok that appear in this issue are potentially alternate future versions of the familiar characters from the DC Universe.

Page 5, panel 1
ALTERNATE REALITY: Captain Atom, apparently quantum shifted from an alternate time, recognizes the Justice League as Maxwell Lord's JLI team from "fifteen years" ago. This revelation indicates that the Captain Atom shown here is a Captain Atom is from the future, as Maxwell Lord's JLI would have been functioning approximately 6 years ago within DC Continuity. In real time, 15 years would make it 1981, and Lord's Justice League did not debut until 1987. 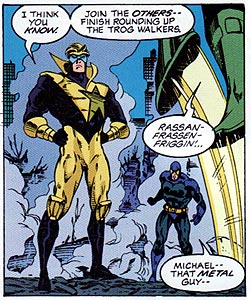 Page 6, panel 1
FASHION ALERT: Debut of the Booster Gold of this alternate universe. Booster's costume is similar to his classic futuristic fabric costume, but with a large gold star placed off-center, over his heart. In addition, Booster appears to wear gauntlets and knee pads. Though he does not appear to be wearing a Legion Flight Ring, Booster is flying. Booster is apparently calling the shots for this alternate Justice League, comprised of analogs of Black Canary, Blue Beetle II, Captain Marvel, Dr. Fate I, Guy Gardner, Martian Manhunter, and Mister Miracle.

Page 17, panel 6
Captain Atom's insult of Booster Gold's leadership is perhaps a little harsh. After all, Booster was the field leader of the first Conglomerate.

Page 18, panel 1
This "planet" that Captain Atom has arrived on is not Earth at all, but War World. In-continuity Booster visited War World during the "Panic in the Sky" event several years prior to the publication of this issue.

Page 24, panel 1
Booster reveals that he and Maxwell Lord are the only old Leaguers left. His allusion to his mechanical arm implies that this Booster also fought the Overmaster and suffered the loss of an arm. The rest of this alternate dimension's Justice League, here called "The Alliance" are all clones. In effect, this hints that this Booster Gold, like Captain Atom, is an alternate future version of regular continuity's Booster Gold.

Page 26, panel 1
Booster's speech ("You're no Captain Atom.") is a paraphrase of Senator Lloyd Bentsen's much repeated comments to Senator Dan Quayle during a televised 1988 vice-presidential debate.