Earlier this month, I laid out what I consider to be the twelve best Booster Gold comics in the character's 35-year history. I start with my personal favorite. If you only read one comic book featuring Booster Gold in your entire life, make it Justice League #4 (1987).

The story, aptly titled "Winning Hand," begins with Batman considering the merits of allowing businessman Maxwell Lord IV to foister new members on the newly-formed league. It's a great twist on established canon. Membership in the Justice League to this point had been limited to those nominated by card-holding members. Just being nominated usually meant a big boost in popularity. Naturally, a glory hound like Booster Gold was itching to be involved, even if it meant being backed by someone so obviously unethical as Mr. Lord. 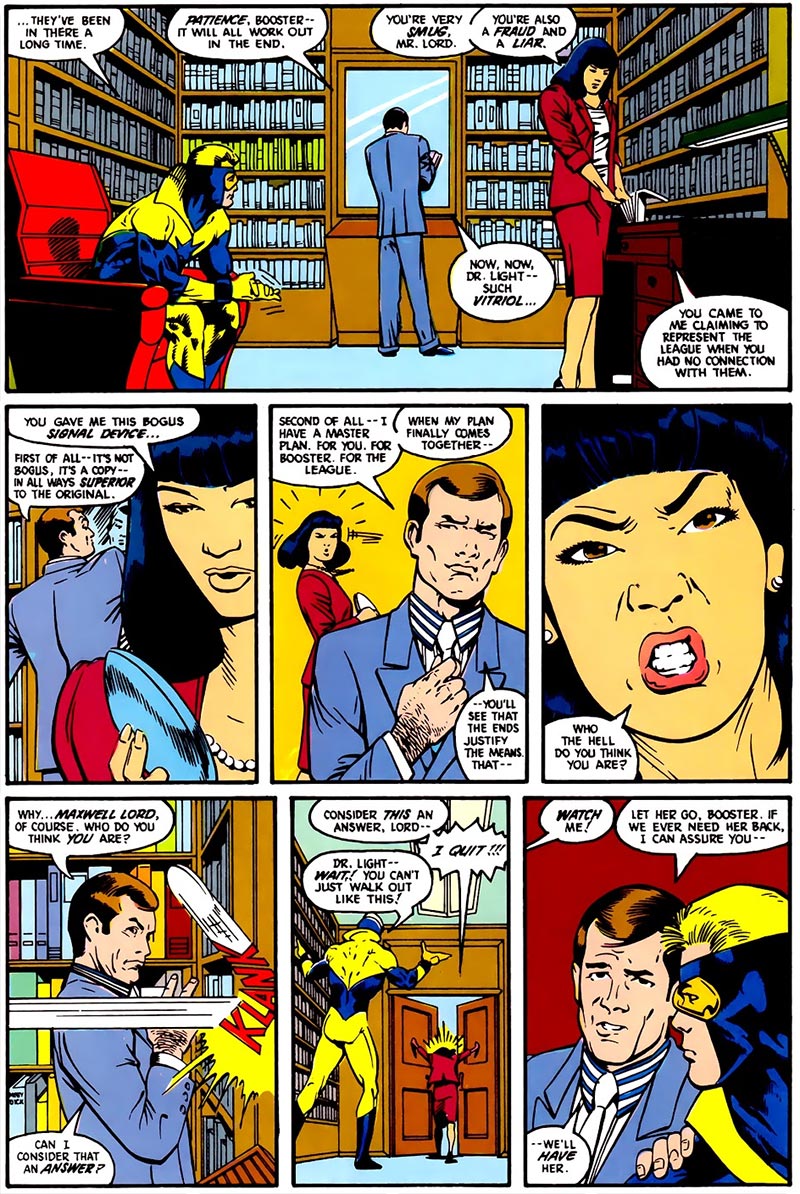 However, Booster isn't entirely without scruples (or pride). Following the example set by Dr. Light, he walks away from the complicated situation rather than let himself be used. What Booster doesn't realize is that Lord has planned for that, too. While Booster is giving his inevitable post-meeting press interview, lives are threatened. Despite the fact that he has just been emotionally crushed by Lord's con job, Booster selflessly jumps into action to save threatened innocents. 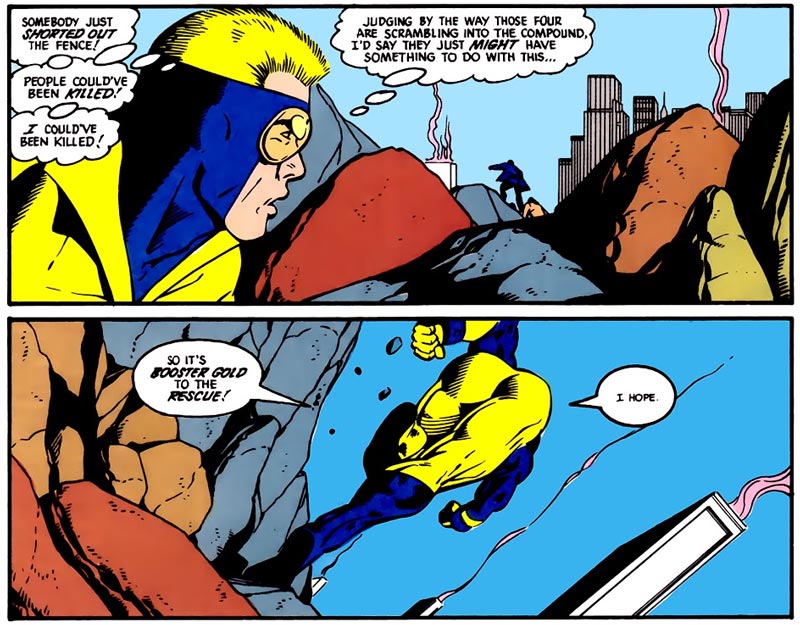 Inside the Justice Cave, Batman takes advantage of the chaotic situation. He orders his colleagues to observe Booster in action so that they judge what the newest hero on the scene is really made of. Thus, Booster Gold finds himself in solo conflict with longtime league foes the Royal Flush Gang. 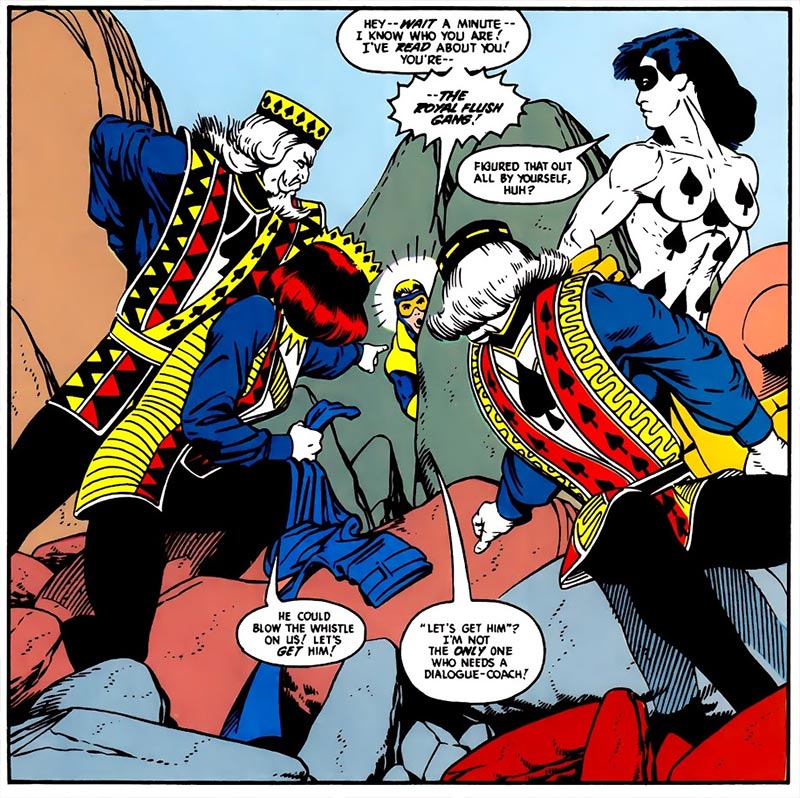 Booster Gold is more than up to the challenge. Using a full array of his impressive technology-based powers and more than a little of his innate intelligence and verve, Booster defeats the four human members of the gang in as many pages.

The victory earns Booster a round of applause from observing leaguers. He even gets a smile from an approving Batman. Many people would have been irritated by Batman's refusal to aid them, but not Booster. The former quarterback is actually pleased to have an audience. He does love the limelight.

The afterparty is short-lived. The fifth and final member of the gang, the Amazo-like android Ace, crashes the scene to make quick work of the league's most powerful members. This leaves Booster Gold to save the day. Well, Booster Gold and his soon-to-be best friend, Blue Beetle. Having known one another for only a few minutes, the pair teams up to destroy the rampaging robot once and for all.

What began as a job interview leads results in Booster's dream coming true (and a dawning new friendship). Batman offers Booster full membership in the league in a show of appreciation and respect, giving the young hero the credibility he so desired (and earned).

How can you not love that?

The issue's script by Keith Giffen is as perfectly paced as the best action movies, and the dialogue by J.M. DeMatteis positively crackles with authenticity, wit, and enthusiasm. Booster Gold comes off as the hero the league needs, and the league itself is clearly a family in the making. Add in Kevin Maguire's unparalleled ability to express both action and emotion (not to mention his brilliantly "cheeky" cover), and you have a guaranteed recipe for success.

Ariel posted on Jan. 27, 2020 at 11:00 AM
It is sad that Booster is remembered in dc canon as an idiot and inefective crimefighter when actually he was one of the more competent and better portrayed of the league's members during the jli years. The joke used to be bettle, not Booster. I think this was retconned with countdown to infinite Crisis and ted's death.

Boosterrific [Official Comment] posted on Jan. 27, 2020 at 3:33 PM
The role reversal was already in effect in I CAN'T BELIEVE ITS NOT THE JUSTICE LEAGUE, which came out months before COUNTDOWN. Ted's image overhaul really came in the pages of L.A.W. at the dawn of the century.

Ariel posted on Jan. 27, 2020 at 4:29 PM
Yes, but at the end of that series, Booster was shown back at full capacity.
Anyway, Booster was never the idiot everyone think he is. And we better forget Tom king shameful handling of the character. I hope jurgens can get to work on Michael again in order to repair the damage done.

Eskana posted on Jan. 29, 2020 at 8:22 PM
Yeah, you've gotta love classic Booster. I like how even the original ones show the balance between his glory-hounding and his heroics, but at the end of the day, show him for the hero he is.
I also love how fast he and Ted get along, even as new members. I remember a certain trip to Paris...

Ariel posted on Jan. 30, 2020 at 7:13 AM
Justice League International #8 "Moving Day" is one of my all time favourite comic books ever! Such lovable characters... And IMHO it was one of the best drawn Kevin Maguire issues. Also, it was my first introduction to Booster. What's not lo love about it? :)