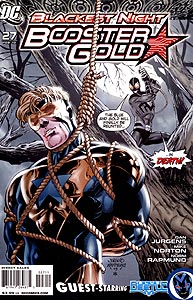 Brief Synopsis: Booster Gold struggles against his emotions and the Black Lantern-reanimated corpse of Ted Kord.

Issue Notes: This issue is a tie-in to the Blackest Night mini-series.

Page 2, panel 1
Picking up immediately where the previous issue left off, Booster Gold finds himself facing the Black Lantern-reanimated corpse of Blue Beetle II at the suburban home of Daniel Carter. Already on the scene are Daniel (as Supernova), Blue Beetle III, Rose Levin, and Skeets.

Page 5, panel 2
In an attempt to confuse Booster, the Black Lantern lists several things pranks that the pair pulled on fellow members of the Justice League International.

None of the pranks listed have been previously shown on panel, though they do all sound like something the comedy duo of Blue and Gold would have attempted. 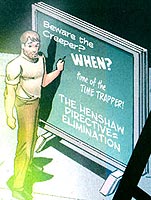 Page 13, panel 2
SCHOOL'S IN: Booster and company have fled to Rip Hunter's Arizona laboratory, where Hunter was hard at work mapping the latest clues to future events in the DC Universe on his trusty chalkboard.

Page 14, panel 1
POWER UP: Hunter reveals that the Supernova suit worn by Daniel Carter keeps its wearer's body in a time stasis field, preventing any physical aging and delaying the onset of any negative effects of physical injury. This is the first indication of this function of the suit, and it is worth noting that this ability of the suit clearly does not impair thought or learning.

Page 16, panel 1
Booster Gold should know that his suggestion is doomed to failure after his previous adventures in this series (such as Booster Gold, Vol. 2, issues 6 through 10). Maybe he is as thick-headed as his critics often claim.

Page 16, panel 6
Booster accuses Rip Hunter of knowing the outcome of current events. This same charge has been leveled at Booster multiple times in the past (notably the Elongated Man in 52 Week 7).

Page 18, panel 1
Booster Gold, Blue Beetle III, and Skeets travel to the Chicago headquarters of Kord Industries, the business once owned and run by Ted Kord. Like Booster Gold and BGI, Kord had trouble maintaining control of his company, but was once again at the helm at the time of his death.

Page 22, panel 6
SPOILER WARNING!: A common weapon in his arsenal against crime, Blue Beetle's solar-powered Flash Gun was a weapon Booster Gold is perhaps most familiar with when it was modified to defeat Eclipso in 1992's Justice League America Annual #7. Note also that in that issue, Guy Gardner accuses Booster Gold of knowing the future, just as Booster accuses Rip Hunter on page 16 of this issue. The author of Justice League America Annual #7 is none other than Dan Jurgens. Reveal

Page 25, panel 3
SPOILER WARNING!: Booster Gold and Blue Beetle III give Ted Kord's body a proper burial at Vanishing Point, the former headquarters of the Time Masters located at the end of time. This means that there is an empty casket in Chicago, where Kord was first buried. That's two empty graves associated with Booster Gold, as Michelle Carter's unused grave is presumably still in Maine (see Booster Gold, Vol. 1, #22). Reveal

Page 26, panel 1
The montage of images of Booster Gold and Blue Beetle seen in the monitors is largely drawn from previously published adventures. Identifiable sources include the covers to Justice League International, Vol. 1, #8, #21, #24 (with minor changes) and Justice League America #34.

Boosterrific Review: A suitable end to the events of the previous issue, as Booster Gold is forced to overcome his personal demons to literally fight his past. This issue would probably be better without the unnecessary, retread-confrontation between Booster and Rip Hunter which briefly derails the momentum of the action. Also, the recurring theme of Booster Gold dealing with Ted Kord's Death, which took place over a year prior to the first issue in this series, is beginning to feel a little stale. Let's hope that following the conclusion to this "Blackest Night" event, the future of Booster Gold can move forward without quite so much looking into the past.

(2 votes)
E (Jan. 4, 2010, 14:37:58)
I didn't find the arguing between Rip and Booster to be stale or pointless. It's been building since the start and whenever Ted is brought up with them it's going to be a sore spot. I did like the moment where it looks like for the first time Rips' feelings are hurt but he never gets to explain himself. I think it's a nice role reversal with how people usually misjudge Booster based on his facade. The addition of Jaime kept Booster focused on the mission at hand. Though I do wonder if Ted having a body when he was buried and Jaime remembering the Time Lab are clues to changes in the timeline. We have a solid connection to the "Bwa-ha-ha" epilogue from 1 million and we're going back to another MIA character.
KMD (Dec. 11, 2009, 11:36:15)
Solid issue and one that I suspect will sell well (it was odd to see Booster Gold-a comic that usually flirts with the bottom of the top 100 sellers break into the top 20 with the first "Dead Ted" issue). While I agree with Boosterrific that the confrontation of Rip vs Booster is growing stale, I think we're going to see more to come-as the last pages reveal someone from Booster's past, with nowhere near as much personality and purpose as Ted, is coming....