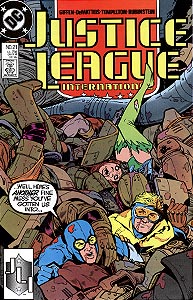 Cover Description: Blue Beetle, Booster Gold, and Fire are beaten and bloody, but conscious and wisecracking while trapped in the rubble of Apokolips' Para-Demons. (Beetle's line of dialog is a slight misquote [possibly intentional] of Oliver Hardy's oft-repeated catchphrase to comedy partner Stan Laurel: "Well, here's another nice mess you've gotten me into.")

Story Notes: The title of this story is another pop-culture reference, specifically to the movie Apocalypse Now.

Page 4, panel 4
Finally joining the fight (but leaving his force field on, just in case), Booster makes a wisecrack about his "soap opera," in which "Cass loves Kathleen - but she thinks he's in love with Cecille." The appropriately titled television show that Booster is referring to is NBC's long-running daytime drama Another World (1964-1999). This offhand comment drew a letter from Paul Decker, NBC Casting Director, which was printed in the letter column of Justice League International #24.

Page 13, panel 1
Oberon stumbles into the lounge of Darkseid, Absolute ruler of Apokolips and one of the most dangerous beings alive. He is reading a copy of Adolph Hitler's autobiography, Mein Kampf (the title here is misspelled, perhaps intentionally, as "Mein Kamph"). A Mister Miracle comic book is visible underneath the table on Darkseid's left. The picture on the wall behind Darkseid appears to be of his son, Orion, as he appeared on the cover to New Gods #1.

Page 18, panel 4
For the first time, Booster and G'Nort appear in the same panel. Even though G'Nort debuted in Justice League International #10 (the only issue of Justice Leaguel to date to not include Booster since he joined the team) and has appeared in several issues since, never before have Booster and G'Nort been in the same location at the same time. Meanwhile, Booster is just engaging Lobo for the first time when their fight is interrupted by...

Page 19, panel 1
...Darkseid. Though several of the heroes present have encountered Darkseid before, this is the first meeting between Darkseid and Booster Gold. Perhaps because this is their first encounter, Booster doesn't know well enough to be afraid of him.

Page 20, panel 1
Booster attempts to back-talk Darkseid. This lunacy lasts for exactly one panel. Surprisingly, Booster survives and is teleported back to the New York JLI Embassy with the rest of the Justice Leaguers.

Meanwhile, series inker Al Gordon has been replaced by Joe Rubenstein. Rubenstein is more heavy-handed and less considerate of Ty Templeton's pencils than Gordon was. To be clear, Rubenstein's work is not bad, it is just noticeably different from what preceded it, and as with all significant transitions, it will take some getting used to. Sometimes you don't recognize what a good thing you have until it is gone, and this issue certainly engenders mourning for the loss of Gordon's inks.