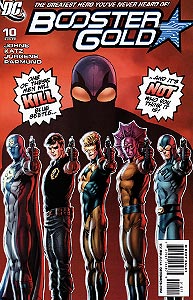 Page 2, panel 3
BORROWING THE CAR: Though Booster is unaware of it at the time, Rip Hunter is working to resolve the time paradox created by the destruction of the Time Sphere that Michael Jon Carter will steal to return to the past and adopt the heroic identity of Booster Gold.

Page 2, panel 4
SCHOOL'S IN: Even as history unravels around him, Rip Hunter takes the time to keep his chalkboard updated with the latest cryptic events concerning the DC Universe.

Page 5, panel 2
Booster explains that the time-traveling Ultra-Humanite that is fighting Superman is from the past, during "the days he first fought Infinity, Inc." Therefore, this Ultra-Humanite will survive this battle to continue in his own chronological development to cross paths with the Justice Society of America.

Page 8, panel 1
Booster Gold temporarily becomes transparent, distracting Blue Beetle in their battle with Maximillion and Supernova. It is unclear why Booster, gradually fading from existence because of the actions of the Time Stealers to erase him from history, would suddenly and temporarily fade from reality only to return moments later, but it presumably has to do with Rip Hunter's behind-the-scenes attempts to restore Booster's personal timeline. (For details, see previous issues of Booster Gold, Vol. 2.) When last Booster was erased from history during the events of the Crisis in Time (see Zero Hour), his fade out was quick and permanent.

Page 8, panel 5
Blue Beetle is saved by the timely intervention of Skeets II. Though Skeets implies that "it's been far too long" since their last meeting, this is actually the first meeting between Blue Beetle II and Skeets II. In addition, Skeets II implies that he has memories of previous "chats" with the Blue Beetle's Bug airship. This is the first clear indication that at least portions of the original Skeets' memory and personality have been transplanted into the second Skeets. It was Beetle who broke the news to Booster that the original Skeets had been dismantled by Checkmate, and here Beetle appears unfazed that Skeets is physically different than previous meetings. Presumably he is unaware that this Skeets is a model taken from a different point in time than the original, although based on recent events, it is unlikely he would be surprised if he was aware.

Page 9, panel 2
POWER UP: Skeets squirts Maximillion with Rip Hunter's "special blend of chemicals" that appears to accelerate the oxidation of iron, causing Maximillion to experience rapid rusting and a corresponding weakening of his external structural components. (Imagine that: a time-accelerating chemical. Rip Hunter must be a Time Master, indeed.) However, Contrary to Skeets' statement that "all robots rust," rust must involve the reaction of iron or iron alloy and oxygen. Therefore robots such as the Metal Man Gold -- comprised of solid, non-oxidizong gold metal -- cannot rust. Even Skeets' golden body is constructed of the skin of Waverider and, as a time-resistant material, is presumably immune to the ravages of rust.

Page 12, panel 1
SPOILER WARNING!: The real mastermind behind Supernova III and the Time Stealers is revealed to be Mister Mind, who has been controlling the mind of Booster's father. Reveal

Page 15, panel 2
Booster is enveloped by the thousand offspring of Mr. (Ms.?) Mind ("the Last Sons of Venus") exactly as foretold on the final page of Booster Gold, Vol. 2, #1. Based on that information, the date of this event is established as "Week 136, Day 5," over 2-1/2 years from the start of the events chronicled in the series 52.

Page 16, panel 5
The term "Rope-a-dope" strategy Booster mentions was a term coined by 20th-century boxer Muhammad Ali during a famous fight against George Foreman (the 1974 "Rumble in the Jungle"). This term has come to define a strategy of placing oneself in an apparently vulnerable but defensible position while an opponent wastes his strength by attacking overly aggressively.

Page 21, panel 1
Shortly after the apparent death of Fire and despite Skeets' assurance that Rip Hunter "will come through" to find a way to save Booster, Beetle, and all of recorded history, Blue Beetle steals the Time Stealers' Time Sphere and disappears into the time stream pursued by the Black Beetle, leaving Booster holding the Black Beetle's magic scarab.

Boosterrific Review: Thematically and emotionally, this issue has a lot in common with issue 4 of this series: an extended fight scene with a myriad of closely connected characters resolving the conflict of an entire story arc through fisticuffs. (Which, really, is a summary of the genre of super heroic comic books in a nutshell.) While the extended journey to this story's conclusion has been at time a little rocky, the payoff is worth the trip, even if the final results have been somewhat predictable.