“Blue & Gold, Chapter 4: Putting the Band Back Together” 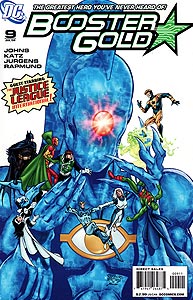 Brief Synopsis: Booster Gold and Blue Beetle II find themselves trapped in an alternate present facing the dire consequences of their actions.

Story Notes: The title to this story is a recurring quote in the 1980 movie Blues Brothers featuring the comedy duo Dan Aykroyd and John Belushi.

Page 2, panel 1
ALTERNATE REALITY: Maxwell Lord's comment about bringing Dr. Light into the Justice League is not entirely accurate, as she quit the League before she actually ever was inducted. Even Booster's actions to change his past (and therefore the entire Earth's present) wouldn't change this fact, though a lot has happened since that more innocent time. According to the published appearances of Booster Gold's chronology, Booster would be Lord's first hand-picked Leaguer (because Dr. Light refused membership in the League).

Page 3, panel 1
Booster Gold and Blue Beetle II stand in the remains of the Batcave. The Batmobile shown in the foreground is the Lincoln Futura concept model made famous by the 1966 Batman television show.

Page 4, panel 1
BORROWING THE CAR: Booster's fainting spell is a direct result of the destruction (as seen in Booster Gold, Vol. 2, #7) of the Rip Hunter Time Sphere that has twice brought Booster from the 25th to the 20th century.

Page 6, panel 3
Beetle's comment to Mister Miracle is a quote from the 1984 movie Terminator concerning time-traveling assassins. The line is reused in sequels to the original movie, both in theater releases and on television.

Page 8, panel 3
Fire's reaction to Booster's arrival in the Jotunheimen Mountains of Norway is inexplicably frigid given their recent past. However, in this timeline, Booster is presumed dead, and there may have been unseen events between Booster and Fire that explain her current hostility. Guy Gardner appears largely indifferent to the arrival of Blue and Gold and Mister Miracle via Boom Tube.

Page 9, panel 6
The purpose for the former members of the Justice League International standing on a mountaintop in Norway is explained when Fire reveals that Ice has returned home. The Jotunheimen Mountains of Norway are named for the race of ice giants of Norse mythology, and appear to be where Ice's family, a race of godlike near immortals, reside. Booster has previously visited Ice's home twice, once to combat her power-mad brother Ewald, and once to bury Ice following her death at the hands of the Overmaster. Clearly, Ice has recovered from that death, a talent shared by both super heroes and gods.

Page 12, panel 1
Booster and the reassembled Justice League International arrive at the site of Alexander Luthor's tower built from the remains of the Anti-Monitor during the Infinite Crisis. Although the events of the DC Universe have not played out exactly as recorded since Booster Gold saved Blue Beetle's life from Maxwell Lord, apparently Luthor was still able to escape from his inter-dimensional prison and begin construction of his tower. Pictured trapped by the tower are Breach, the Martian Manhunter, and Nightshade, as well as the mortal remains of Alexander Luthor and Lady Quark. While Martian Manhunter is soon freed from his prison in the tower, it is unclear what happened to Breach and Nightshade, as the two are not seen again.

Page 14, panel 1
Together again for the first time in years, the Justice League International takes the fight to Maxwell Lord, his O.M.A.C. Units, Checkmate pieces, and Superman.

Page 16, panel 4
During the ensuing battle, the League manages to save Green Lantern...

Page 18, panel 2
...Batman, who has been infiltrating Checkmate under cover.

Page 22, panel 1
SPOILER WARNING!: At long last, Booster finally comes face-to-face with the villains who have been manipulating time since the dawn of the new multiverse, the Time-Stealers. Members of the group include Black Beetle, Despero, Maximillion, Per Degaton, Supernova III, and Ultra-Humanite. Reveal

Boosterrific Review: The Justice League International reunited (more or less)! Now this is the alternate present that we want to see. The number of familiar characters and range of honest emotion squeezed into this issue makes up for some of the sand-bagging that seemed to plague the story pacing in the previous issue. This story arc started with Booster Gold joining forces with the (Blue) Beetles and now proves that he can indeed get by with a little help from his friends.