In case you haven't heard, you'll find the 1000th issue of Action Comics at your Local Comic Shop today. The issue is a celebration not just of Superman, but also all the very talented writers and artists who have toiled for the last 80 years to bring comic book fans joy and inspiration.

Booster Gold creator Dan Jurgens is one of those writer/artists. Jurgens not only drew the first appearance of Superman in the 1980s post-Crisis on Infinite Earths DC Universe (in Booster Gold #6!), he was instrumental in bringing us the death and return of Superman in the 1990s. As part of the celebration, he also pencilled one of the 11 different Action Comics #1000 covers!

Here's to 1000 more adventures of Superman to come.

UPDATE: SuperPat dropped by the comments to tell us that Booster does make an appearance in Action Comics #1000! Everybody is getting in on the celebration!

It's not often I have the opportunity to showcase Booster Gold fan art that you can buy, but artist Jonathan Reyes is selling this minimalist poster via Etsy.com: 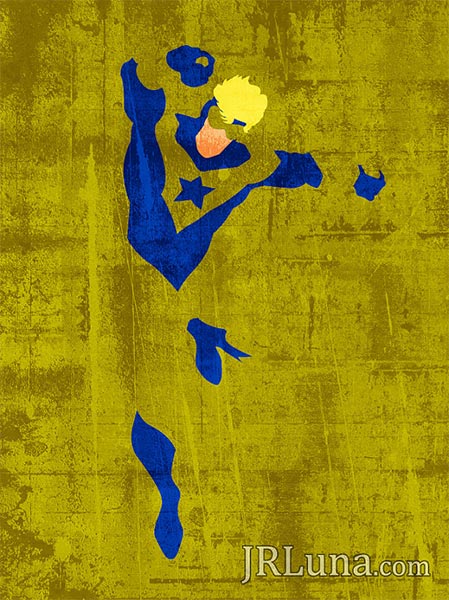 If you buy from JRLuna's Etsy.com store before the end of March and use the coupon code "MARCH2K15", you can save 20%. That's a pretty good deal on such a sweet piece of art.

Nothing Says Etsy Like a Chibi Blue and Gold

Blue and Gold are back together everywhere, baby!

Blue and Gold and Fire and Ice? (And isn't that Wally West's belt?) That is my Justice League!

This poster, created for MegaCon by artist Jerry Gaylord and colorist Gabriel Cassata, is just one of two different 11x17 Justice League poster prints that include Booster Gold and Blue Beetle currently for sale in Gaylord's Etsy.com store, theFranchizeStore. (There are only 86 days until Christmas, hint, hint!)

He brought you Agent Liberty, Risk, Waverider, Doomsday, and Cyborg Superman. But most importantly, he's the creator of Skeets and someone called Booster Gold. Who else could it be but Dan Jurgens?

Jurgens celebrates his 55th birthday today, and he'll no doubt be celebrating by slaving away at the drawing board for future issues of Futures End or maybe pages of September's Booster Gold one-shot. But you can celebrate by bidding on some of Jurgens' old work, specifically this poster from his run on Justice League:

That rare poster from 1992, drawn by Dan Jurgens and inked by Rick Burnett, is currently listed for sale on eBay.com. The auction ends Tuesday, so act fast. You don't want to have to wait another few decades before you get another shot at it.

Thanks for all the hard work over the years, Dan! Here's to 55 more.