Last week on Twitter, the image of a 1938 house advertisement for Action Comics #1 inspired Russ Burlingame to compare it to "that Direct Currents-style book that circulates as '1: Booster Gold' from time to time."

DC Releases was a free handout for customers in the nascent direct comics market of the mid-to-late 1980s. (No. 48 was the final issue before it was replaced by Direct Currents, which continued to promote DC products for another decade.) This is called the "February" issue because it was promoting books with a "February" cover date, although they were mostly being sold to consumers in October/November 1985.

He's In It For The Bucks!

Just between you and me, the other heroes in the DC Universe aren't too hot on Booster Gold's strivings for star-status. But Skeets, on the other hand, is loving it! Skeets? Oh. He's Booster's flying, computerized companion. Who knows where he came from, either. But wherever it is, all the gossip columns have it that he and Booster came together!

As Metropolis goes goo-goo and ga-ga over this empowered hunk (ya gotta hand it to the guy), he keeps his priorities straight! He knows that being a celebrity super-hero means being a super-hero first, and when B.G. puts his powers into drive—watch out!

In this premier issue, Booster must recover a satellite guidance system stolen from S.T.A.R. Labs (I hope he doesn't miss his contract negotiation meeting because of that!) And: Action explodes in the streets of Metropolis when the incredibly strong Blackguard meets our affluent hero face-to-face!

Dan Jurgens, penciller on The Legion of Super-Heroes, Sun Devils, and Warlord, and Mike DeCarlo, who inked Dan on Warlord, promise a super-action series, seasoned with just the right blend of satire, urbane wit, and humor. So, as Booster Gold would say, buy, buy, buy!

While the widely-seen house ad for Booster Gold #1 that was included in Crisis on Infinite Earths #11 (and almost every other book DC published in October 1985) is more famous and much more widely seen than DC Releases, this handout was created specifically to promote books released on October 8, 1985 (including Crisis on Infinite Earths #11). Therefore, as Russ said, Booster's cover panel here is very likely the character's very first public appearance.

Personally, I'd rather spend my money on comics rather than advertisements for comics, but you do you.

When Heroes Fail to Save the Day

Two months ago, we learned how DC's Legends of Tomorrow executive producers Phil Klemmer and showrunner Keto Shimizu got DC to agree to allow Booster Gold to finally appear on their show.

Late last week, we learned why.

In response to fans questions on Twitter, Shimizu herself tweeted:

DC was in our corner trying to help our chances of renewal. They and WB wanted us to survive. We were asked for a new character to “excite” the audience, and attract more viewers. We requested Booster and DC agreed. It was all in an attempt to save the show.

That's right: they were counting on Booster Gold to help save them. And Booster failed.

As a Booster Gold fan, I should probably point out if you want to stir up public support, it would definitely help to actually tell us in advance to tune in to see our hero. (Early notices only teased a fallen hero whose "golden years are in the rearview mirror.") It's also really hard to boost week-over-week ratings if a character appears only in the season finale. (Booster's episode, "Knocked Up, Knocked Down," had the second-smallest audience of the season; the next-to-last episode was the smallest, meaning Booster actually did bring it up somewhat, and I certainly would have watched the following week if there had been one.)

That said, failure is kind of Booster's story, right? His heart is always in the right place, but he often overestimates his own abilities while underestimating the consequences, sometimes making a bad situation worse. Sometimes much worse. Cancellation worse.

However, Booster Gold's most sterling quality is that he is no quitter. After ruining the day, he'll dust himself off, take ownership of what he did wrong, and set out to make it right. It's the prototypical hero's journey. Everyone loves a redemption story.

And that's why I'm now strongly hoping that Legends of Tomorrow does find a way to return to the screen, at least long enough to give its fans the ending they deserve. We can all rest assured that Booster Gold will continue working behind the scenes until he has helped all those who need rescuing. Because that's what real heroes do.

Where Can You Even Find a Phone Booth Anymore?

Artist Kevin Maguire tweeted this image last week in honor of the Justice League International's 35th anniversary. The drawing has made the rounds of the World Wide Web a time or two already, but it's just too Boosterrific for me not to repost here.

I especially love how good Booster Gold looks with white hair and wrinkles. Our hero is far to vain to let a little thing like time dull *his* looks. (It probably helps that his brush with Chronal Leprosy in the 25th century left him practically immortal. [See Booster Gold volume 2 #43 for details.])

Let's not wait so long before our next reunion, old pals.

Variations on a Theme

Earlier this week, we learned via aiptcomics.com that DC will be revisiting the Flashpoint universe in a seven-issue event called Flashpoint Beyond starting in April.

It remains to be seen what role (if any) Booster Gold will be playing in this event, but we do know that he will be on the 1:50 variant cover to Flashpoint Beyond #0 drawn by Todd Nauck: 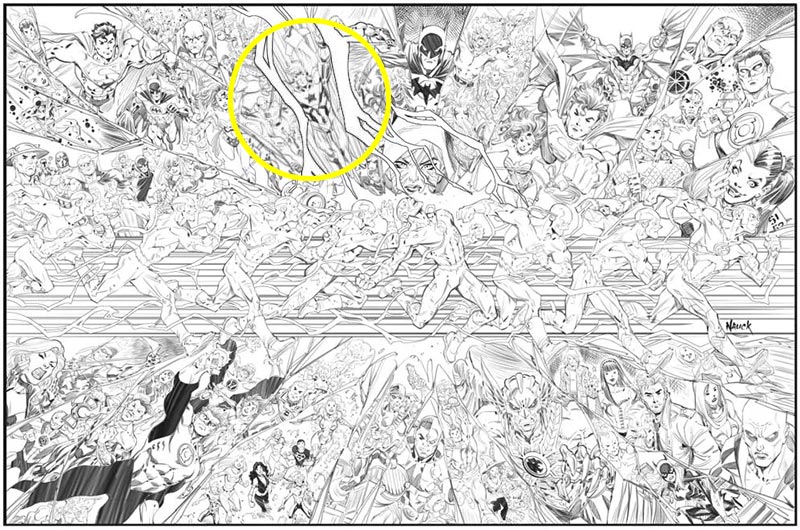 Now, a "1:50 variant" means that for every 50 copies a comic shop orders of the regular cover, they *should* get 1 of these. (I say "should" because distribution shortages and allocations have been known to happen.) I suggest that any Booster boosters who wants this in their collection go ahead and preorder 51 copies of Flashpoint Beyond #0 from their their LCS.

But that's not the only variant cover we'll be seeing Booster on in April!

As you may have heard, Entertainment Weekly broke the news that the Justice League will be killed off in April's Justice League #75. (Don't worry too much: comics being what they are, I'm sure they'll get better.)

In a tribute to the 30th anniversary of the "death" of Superman (see what I mean?), one of the many variant covers of Justice League #75 will be drawn by Dan Jurgens and Norm Rapmund and feature many former leaguers, including Booster Gold and two Blue Beetles!

This cover should be easier to get than a 1:50, but we'll have to find out more as we get closer to April.

Here They Come to Save the Week

It's been a rough week for me, so I'm very pleased to end it with this brilliantly gleeful "scribble" from Mike Hartigan (via Twitter.com):

Hard to stay in a bad mood looking at those two (and a half) having so much fun!