Booster booster Cort dropped by Wednesday's post with a Boosterrific comic appearance that no one noticed last week in Batman/Superman #7.

On the fifth page of that issue, among six panels showcasing Batman and Superman palling around and stopping super-crime, this happened:

The first thing I thought when I saw that was "Magog is still alive?" I'd thought he died, but I temporarily forgot that no one ever dies in the DC Universe, especially since the entire universe has been rebooted at least three times since 2011's Justice League: Generation Lost #13. *sigh*

The second thing I thought was "Maybe Booster Gold should be doing a better job keeping tabs on Skeets." It seems almost every time we see Skeets without Booster, someone is trying to take it apart to get their hands on its knowledge of the future. (For examples, see the Linear Man in Adventure Comics #476 or Mr. Mind in 52 Week 51.) Stranger danger, Skeets!

Although, come to think of it, Doctor Shocker reprogrammed Skeets remotely in Booster Gold #11 while Booster Gold was standing just feet away. I guess that's one lesson Batman could learn from Booster. If you have a robot sidekick, you'll still go through them just as fast, but at least you don't have to keep redesigning their costumes.

Thanks for that spot, Cort.

Cort posted on Mar. 6, 2020 at 2:00 PM
As I read it was wanting to read THAT story. But ultimately what we got was pretty fun too. No problem. Just glad that of the last few months Booster has had quite a bit of cameos or even talking spotlights, wherein he was missing for half a year there.

That sidekick-sized sketch card was created by Robert Demers, who you can find on both Deviant Art and Twitter as RobDemersArt.

I don't read Batman, so I missed it when Batman #72 came out back in June and finally answered a question we had about Batman #50.

You remember Batman #50, right? That's the one that was supposed to end with a wedding, but instead ended with Bane standing around with his pals. And Skeets. 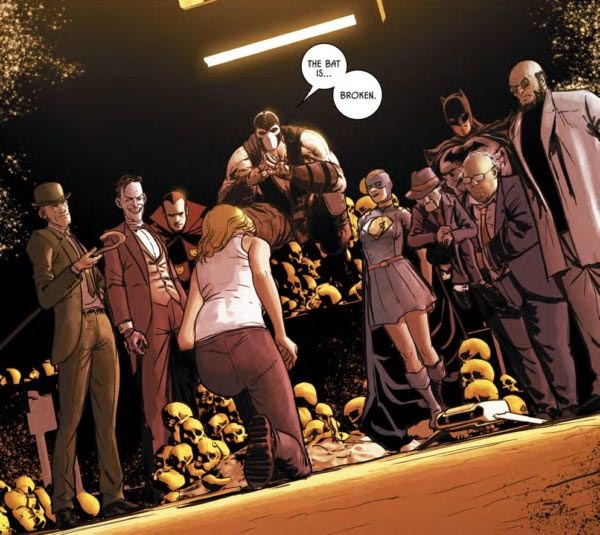 What was Skeets doing in a room full of villains? According to Batman #72, he was just another discarded tool.

The "you" in the above text is Bane. So it's really Bane's fault that Booster Gold was a total idiot in Batman #45. I guess.

So Bane is so smart he knew how Booster's meddling with history would ruin the world in exactly the way that he needed it to? And he knew that Booster would go out of his way to tell Batman what he experienced in the pocket universe that his idiocy created?

And while we're on the topic, if Skeets' only purpose was to depress Bruce Wayne, why did Bane bother to recover Skeets after Batman #47?

Guh. Whatever, Tom King. Whatever.

Cort posted on Aug. 26, 2019 at 11:12 AM
That raises only more questions and makes less sense. Bane or Riddler don't strike me as the types to be able to reprogram 25th century tech smart. Smart sure but not like that. Good grief.

Herb posted on Aug. 26, 2019 at 2:21 PM
Aside from that King put the time travel tech in Skeets, if Riddler or Bane had access to time travel, what would the point in any of their motivation?

Boosterrific [Official Comment] posted on Aug. 26, 2019 at 3:56 PM
Those are some great points reinforcing a simple truth: scratch the surface of a bad Tom King story and you get a worse story. Let's all just agree to forget this whole thing ever happened, okay?