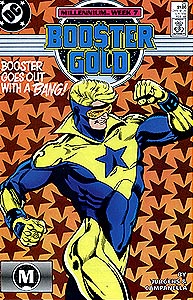 Cover Description: Booster Gold strikes a muscular pose before a field of stars.

Issue Notes: Millennium Week 7 tie-in. The events in this issue were set up by the events in Millennium #7. This is the final issue of the Booster Gold series. In the letter column, Dan Jurgens confirms that the book was suffering from low sales and he didn't particularly want to change the stories to try to find a market, preferring to keep Booster Gold an unlikable, selfish opportunist rather than change the character.

Page 3, panel 7
Tixie Collins tells Martian Manhunter that Booster Gold has quit the superhero business, destroyed his mansion, deactivated Skeets and departed for parts unknown with the Chosen Xiang Po. Booster took these drastic actions in between Millennium #7 and this issue.

Page 6, panel 6
Martian Manhunter reveals that Booster is a descendant of the Chosen, and that Booster's presence in the present is his destiny in order to protect him from future events. This information was imparted to Manhunter by Harbinger, who chronicled the history of the universe for the Monitor prior to his death in the Crisis on Infinite Earths mini-series. Manhunter is never shown to share this information with another individual, so the only people in the DC Universe who have this information apparently remain Manhunter and Harbinger.

Page 7, panel 1
Booster takes Xiang on a journey that parallels his journey through the past few years. As a foreign stranger to American capitalist culture and its history, Xiang is an excellent vehicle for drawing readers through the all-too-brief history of Booster Gold. A narrative balloon describes this as an Autumn day, likely in the month of October or November.

Page 8, panel 1
Booster enters a Burger Queen. Clearly this is a reference to the fast food restaurant chain Burger King, the second largest fast food chain in America in the 1980s behind McDonalds.

Page 8, panel 2
Continuing on his metaphoric journey down memory lane, Booster draws a parallel between his early adventures in the 20th century, where, like his companion Xiang, he didn't fully understand American slang.

Page 11, panel 4
For the second time, Booster strikes a guard at Metropolis International Airport in order to access his airport hanger (see Booster Gold, Vol. 1, #13). This time, however, it is not his plane anymore; Dirk sold Booster's private plane to Lex Luthor, and the plane now sports a LexCorp logo.

Page 12, panel 4
Booster's plane is being pursued by a LexCorp "chase jet" that is modeled on an SR-71 Blackbird, one of America's fastest, highest flying spy planes. The SR-71 had a cruising speed exceeding Mach 3 (over 2,000 mph), which would make it easy to catch but difficult to pace Booster's civilian Beech King, which tops out at around 300 mph. The two planes do have something in common, however; both have LexCorp logos on their tails.

Page 13, panel 1
SR-71 pilots, such as the pilot of the Luthor chase plane designated "Chase One," had to wear specialized pressure suits because of the exceptionally high cruising altitude.

Page 14, panel 3
Blue Beetle, a self-described "electronics genius" has reactivated Skeets, a feat that S.T.A.R. Labs' Jack Soo was unable to accomplish in previous issues. Granted, Soo was attempting to repair damage caused by Doctor Shocker, and Beetle was simply looking for the "on" switch, this still continues the parallels in earlier stories where Booster had stolen a plane while Skeets was deactivated (Booster Gold, Vol. 1, #13).

Page 15, panel 3
The SR-71 is a reconnaissance plane, and as such focuses on speed, not guns, for its operational mandate. "Luther's Energy Cannon" is an unusual armament on a spy plane, which is likely why it is mentioned to explain the SR-71's ability to shoot down Booster's jet.

Page 16, panel 2
Rip Hunter disappoints Booster, telling him that he is unable to send him back to the future. This seems to be the last straw for Booster. He clearly lacks the confidence and optimism that he had in their first encounter in Booster Gold, Vol. 1, #13.

Page 18, panel 4
After Beetle has offered Booster a place to stay at the JLI Embassy, Manhunter produces his discarded costume from a pouch in his cape. Skeets encourages him to put it on. Does Skeets know something about the future of Booster Gold that he's not letting on?

Page 19, panel 2
Booster pays a final visit to Trixie before leaving Metropolis, interrupting her workout. Booster laments the fact that he never made a workout video such as Jane Fonda's, the highest selling instructional workout tape in the 1980s. Trixie is shown to have both of Booster's presidential cats, Jack and Jill, not seen since Dirk saved them from the destruction of Reilleau Towers by Shockwave (in Booster Gold, Vol.1, #11).

Page 20, panel 2
As Trixie explains to Booster that Sara [sic] Davis is now living with her mother, she reaches to drink from a green 7up bottle. In production since the 1920s, 7up was originally marketed as a health drink, and in the 1980s used the slogan "The Un-Cola."

Page 20, panel 5
Booster gives Trixie a goodbye kiss. Despite the chemistry between the two throughout the series, it is their first and only kiss. The two will not meet again for many years (in Chase #4).

Page 21, panel 1
Booster vows to return to glory (and fiscal solvency) as he flies into the Metropolis night alongside Skeets. This is the last appearance of Skeets for several years. 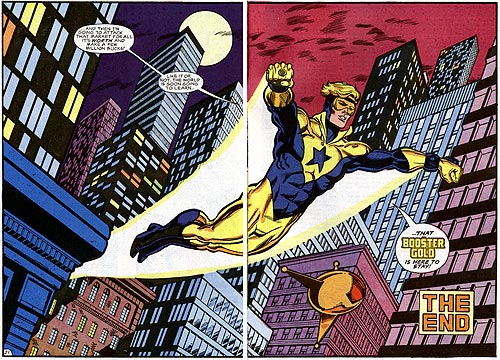 Boosterrific Review: For the third time in three issues, if you have not read some other issue before reading this one, don't bother. (An interconnected continuity in the DC Universe is exciting when it provides for a fabric upon which to project a story, but it becomes an unnecessary burden when stories require readers to be familiar with the events of an entire universe to make any sense of events in single comics.) Despite Booster Gold's strutting pose on the cover, he spends most of the issue whining as he embarks on a quest of self-pity with a kidnapped sidekick. Robert Campanella's sketchy inks do nothing to prop up this weak Dan Jurgens' story which ends with our hero making an unfortunately abrupt emotional about face. We are happy for the direction of the ending, but it just does not seem to occur as a natural course of events. (As a side note, Jurgens' dialogue is also worse than usual in this issue. Is the series creator so distraught over the loss of his child that he can no longer turn in a good issue, or is there some other form of editorial/creative interference behind the scenes of this issue?)

No doubt there is no great ending for a series that suffers an abrupt cancellation, but being squeezed out as a subplot in a mega-crossover is pretty insulting. Sadly, more disappointing than the mere cancellation of this series is the shame that the final issue of Booster Gold's debut series is also its worst.