Super Power Spotlight on the Goggles

What makes a hero super? The super powers! From awesome strength to zero-to-sixty speed, great superpowers are the most useful tricks in every famous costumed crime-fighter's tool kit. Michael Jon Carter knew this, and that's why he started his career with high-tech goggles.

Energy blasts, impenetrable force fields, flight: Booster Gold's best known powers are also the ones that show up the best on action-oriented comic book panels. But Booster's arsenal contains more than just power gauntlets and powered tights. He's also got a fancy pair of glasses which, while less flashy, can be just as useful.

Booster's goggles have been a part of his costume from the very beginning. Using components he stole from the Space Museum in the 25th century, Booster and Skeets integrated the goggles into the hood of his power-suit and fueled them with the same "little power rods" that supplied energy to his other technological abilities, as detailed in Booster's very first chronicled adventure detailed in Booster Gold volume 1 #8.

Though their technology isn't traceable to any particular hero or villain, their powers were clearly inspired by the incredible range of abilities of a certain Man of Tomorrow's Kryptonian eyes.

Booster has used the goggles' infrared filters to help him defeat the mad bomber Mister Twister in Booster Gold #5 (1986) and infiltrate the 1000's waterfront stronghold in Booster Gold #12 (1987). The magnifying ability came in handy when the Justice League needed to find a weak point in the otherwise indestructible hull of the alien Klaarsh spaceship in Justice League Quarterly #7 (1992), and the telescopic function was useful when traveling into the Old West to help Jonah Hex bring the warped Hootkins Gang to justice in All-Star Western #20 (2013). 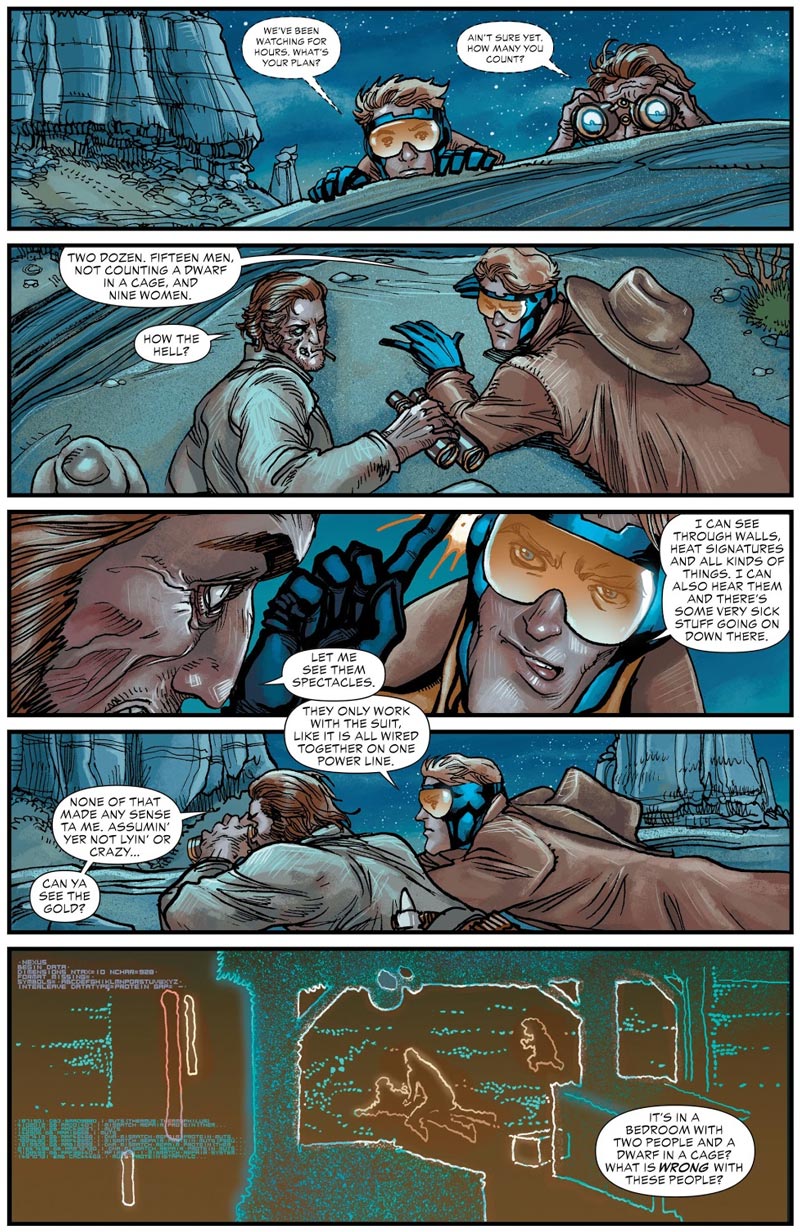 Super strength is great if you want to break through walls, but a hero always knows which walls can be broken safely. Knowledge is real power, and nothing is better at gathering information than high-tech magnifying infrared goggles, just like the pair Booster Gold wears.

If you'd like to read about other powers in Booster Gold's arsenal, check out previous spotlight posts on his Force Field Belt, Booster Shots, and Flight Ring.

Today at your Local Comic Shop you'll find the continuing adventures of Jonah Hex and Booster Gold in All-Star Western #21.

When we last left our heroes, they were returning to Red River Junction with the recovered gold and the sole surviving member of the Clem Hootkins Gang. But if the preview pages at CraveOnline.com are any indication, the trouble is just beginning for this odd couple.

Last time we saw Booster Gold, he was hungover and being laughed at by Jonah Hex. It's a pretty sure bet that things are going to get worse for our hero in today's All-Star Western #20.

You can find a preview of the (very gory) issue online at nerdist.com.

"We're going to see Booster thinking on his feet," [Palmiotti] says. "He's pressed into a situation right away in the book that is a lot bigger than he can handle, and Jonah has a firm grasp of what's going on and Booster is coming into it and trying to figure out not only why he's there and what he's doing there but also solve what's been dumped on him."

This is neither Booster's first trip to the Old West nor his first meeting with Jonah Hex. Dialogue in the issue preview subtly implies that Booster's previous drunken meeting with Hex in Booster Gold, volume 2, #3 is still in continuity! Hooray!

You can read a preview of the issue yourself at ComicBook.com, where Russell Burlingame will soon be running a variation of his "Gold Exchange" column with co-writer Justin Gray.

Several of us comic book bloggers put our heads together in an attempt to find ways to promote comics outside of our typical specialties. The goal was to present books that don't sell especially well but are still well worth reading. I set out to find some comics that were selling worse than Booster Gold that I enjoyed, so I could join the fun. There were plenty of great books to choose from, but being a longtime DC man, I couldn't let the opportunity pass to promote another time-traveling DC hero: Jonah Hex.

Hex has received a lot attention recently for his box office bomb. This is a terrible slight to a terrific character who is appearing regularly in a fantastic series. Hex's current comic, Jonah Hex, Volume 2, is, like Hex himself, a throwback to an earlier era. His comic books are frequently self-contained stories instead of the modern ongoing soap-opera of diamond chronology. Usually, you can pick up just one issue and be entertained by all the shooting and questionable morality of a prime-time television show.

If you are unfamiliar with Hex, you may be surprised that the comic book character is pretty much the prototypical Western anti-hero. (Hex is a man abused by life who has turned his cynical, sociopathic world-view into a unique way of life as a bounty hunter. No magic involved!) That might sound boring and cliched, but there's something quintessential American about the concept: just ask Clint Eastwood or John Wayne. Hex often does the right things for the right reasons, but he also does a lot of wrong things for money or sheer orneriness. This sort of questionable morality, key to the Western genre, is also the core to Hex's character.

As much as I enjoy John Ford and Sergio Leone movies, I've never really been a fan of comic book Westerns. Unlike DC's war comics, the typical DC Western always seemed too clean, their morality too well-defined. That has never been the case for Hex, who has been slugging through a moral morass as gray as his Confederate uniform since his earliest appearances. Jonah Hex is a monster, and he can not and will not hide who he is. His stories are dark and bloody. And there are never any winners, including Hex himself. 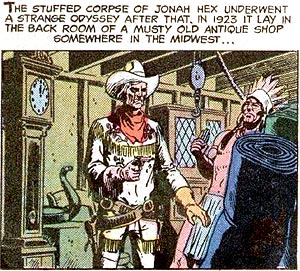 Thanks in no small part to its timeless themes, the many adventures of Jonah Hex easily rank among the greatest Western genre stories ever published by DC Comics (rivaling perhaps only Preacher). From his earliest origins as a ruthless bounty hunter in All-Star Western and Weird Western Tales to his reluctant flight into the future of the DCU in Hex (where he came face-to-face with his own stuffed corpse), the character has been consistently entertaining. His writers have made an effort to frequently subvert the mythology of Hex in favor of telling the timeless stories of greed, vengeance, murder, and justice synonymous with the legends of the Old West.

Jonah Hex, Volume 2, as written by Justin Gray and Jimmy Palmiotti, continues this tradition of using Hex as a centerpiece to frame hard-nosed stories of an American psyche as scarred as the protagonist's face. Pick up a copy and you'll be probing the depths of humanity's dark soul (as drawn DC's finest artists -- a trip through Hell never looked so good). Unlike anyone who crosses Hex, you're sure to have a damned good time.

Interested in reading more? Good!
Check out the lesser-known titles reviewed in these other blogs and "Read Them, Too!":

Adam Strange at It's A Dan's World
American Vampire at Doom Patrol
Astro City at Speed Force
Booster Gold [!] and Zatanna at Red Tornado's Path
Essential Man-Thing at Firestorm Fan
Forgetless at Girls Gone Geek
Franklin Richards digests at Once Upon a Geek
Glamourpuss at Being Carter Hall
Peter David's Hulk at Fortress of Baileytude
Scott Pilgrim at Toyriffic
Son of Tomahawk and Thor the Mighty Avenger at Aquaman Shrine
Spelljammer at HeroPress
Spire Christian Comics at Mail It To Team-Up
Strange Science Fantasy at Siskoid's Blog of Geekery
R.E.B.E.L.S. at Indigo Tribe
The Unwritten at K-Squared Ramblings
Welcome to Tranquility at Girls Gone Geek

tiggerpete posted on Sep. 29, 2010 at 8:36 AM
y'know, that's interesting that you highlight Jonah Hex, on the most recent episode of the Fanboy Buzz (my podcast on Project Fanboy) we interviewed Jimmy Palmiotti. while it wasn't focused on any one project of his, we did touch on Jonah Hex, you should check it out, if for nothing more than listening to Jimmy Palmiotti (we planned for a 15-20 minute interview, in the end it was an hour and a half, Jimmy can talk, and its always fun)

Siskoid posted on Sep. 29, 2010 at 10:53 AM
Good to see some support for Hex, because I doubt the movie will have garnered it too many new fans. Sadly.

rob posted on Sep. 29, 2010 at 3:16 PM
I'm glad Jonah Hex has his own book again. DC and Marvel have been all-superheroes for so long, its kind of hard to remember a time when they both published lots of western, war, mystery, and romance comics.

dan posted on Sep. 29, 2010 at 8:33 PM
Western comics like this are sadly all to rare these days!
If you need a dose though to get you through look for the free webcomic Guns of shadow valley. It is freakin brilliant!

Boosterrific [Official Comment] posted on Sep. 29, 2010 at 10:59 PM
@tiggerpete, I have about a 20-second attention span, so I never listen to podcasts unless someone has given me a specific reason. And you just did. I'll check it out as soon as I have time (busy, busy, busy). Btw, in the future, when you've got a plug, you might as well include a link. What's the point of the Boosterrific comments section if it's not to share? http://forums.projectfanboy.com/showthread.php?t=6978

@dan, at your suggestion, I will take a look at Guns of Shadow Valley (gunsofshadowvalley.com) as well. Thanks!

Justin Garrett Blum posted on Sep. 29, 2010 at 11:44 PM
Good call. I've only read the first couple of trade paperbacks of the current volume, but what I've read have been memorable and embody a sort of moral ambiguity that isn't often done well in comics. I'm a fan of the Palmiotti and Gray team largely because of this and their UNCLE SAM comics.

BubbaShelby posted on Sep. 30, 2010 at 1:32 PM
It's a shame the movie stunk (I assume at least, having not seen it, and not having any desire to do so either.) Because the character has so much potential.

BoosterPowershot posted on Oct. 1, 2010 at 2:50 AM
I've been reading Jonah for a while now. I enjoy their generally one-and-done stories, but due to the NYCC coming up, I've had to forsake a lot of weekly purchases, including Jonah. I'm focusing on the BG-related titles, which are BG, JL:GL, and Power Girl.