People Are Talking, Talking About People

Whether or not I'm a fan of CW's programming, I have to admit that Donald Faison's portrayal of Booster Gold on DC's Legends of Tomorrow season 7 finale has certainly raised the profile of the character and introduced him to a whole bunch of people who have never actually set their hands on a DC comic. That's an objectively good thing.

So it is a worthwhile experience to read how the show's executive producer Phil Klemmer finally got around to adding Booster to his long-running show.

Here he speaks to Chancellor Agard for ew.com:

EW: Arrowverse boss Greg Berlanti has reportedly been working on a Booster Gold movie for years. How did the character wind up on Legends?

Klemmer: As you might expect, through the side door you'd least expect it [to]. I just remember [co-showrunner Keto Shimizu] and I were on a call with Kim Roberto at DC, and we were just talking about fun characters. I think somebody threw it out there, of course never [imagining] in a million years would we get Booster Gold. And then it felt like 15 minutes later, DC called us back and was just like, "Hey, Booster's yours." And just you have a moment of being like, "Okay, this is clearly a prank of some sort, because..." We were all giddy and in disbelief and then it just became a quest of finding an actor who was worthy of the character.

EW: Why was Booster Gold on your mind to begin with? Were you just looking for a DC character to bring in at the end of the season? How did Booster end up fitting the needs of the story?

Klemmer: It's always the tonal fit and just knowing, I don't know, there's just something so lovable and unexpected. You just knew that he was going to work as kind of a bit of the merry prankster, a bit of a BS artist.

Klemmer was also quizzed by Joshua Lapin-Bertone at DCComics.com:

DC: How familiar were you with Booster before this?

Klemmer: I just knew about him from the early days of Legends, when I would hear of various projects, whether they were TV shows or movies, in the same halls where I was working. And obviously dealing with Rip Hunter in early seasons as well. I just assumed that he was going to have his own project. I never imagined that he would come into our world.

DC: For building this version of Booster, did you draw upon any particular stories? Or did you build him from the ground up?

Klemmer: The creation of a character really takes place over the course of that first season, and then seasons to come. It's going to really be a correspondence between us as writers and Donald as a performer. We definitely wanted someone who is a little off center, and like, a little bit mischievous. But we also just wanted a charisma bomb.

And we round out our media tour with Klemmer's conversation with Damian Holbrook of TVInsider.com:

TV: Is the plan to keep Donald on the board?

Klemmer: For sure. We’re not gonna let Booster get away. I’m really excited to write him—he’s the kind of character you wish you could be. You could get away with murder and be so charming that you never really have to suffer the consequences. He’s the antithesis of a writer. Writers are deeply neurotic and self-loathing self-doubting, etcetera. I think that’s why we writers are drawn to those characters—because those are our secret alter egos.

Season 8 has not yet been announced. Will there be another season of Legends of Tomorrow? If I were a betting man, I'd bet yes (especially if Michael "Booster" Carter is on the field). Legends of Tomorrow is one of the few CW shows that has improved its ratings season-over-season, so I think we should prepare to see more of Klemmer and Faison's Gold come fall.

Fool Me Twice, Shame on DC

For the second week in a row, I went to my Local Comic Shop to buy books that DC says via their website should be available now only to discover after arriving that they were not actually released. Obviously, I'm making a mistake expecting DCComics.com to give me an accurate assessment of what they are making available each week.

So I'll consider this a lesson learned. From now on, I'll only trust release information reported by the website of DC's sole distributor, lunardistribution.com, (which only reports books shipping a few days in advance) and even then probably only after I have a book in my hand.

What that means for you, loyal Boosterrific.com visitor, is that release dates I have listed for upcoming new releases may not be accurate, even when I have taken that data from DC Comics itself. These sorts of scheduling problems shouldn't be a big surprise to any of you who have been buying comics for any length of time, but it's still worth a reminder.

I went to my Local Comic Shop specifically to buy Blue and Gold #2, and they told me they didn't receive any copies. This despite the fact that I had checked DCComics.com before I left the house, and the website said the book was "Available Now."

I figured it was just a case of the distributor short shipping the title. That happens. Frequently. (Yeah, it still bothers me, but what am I going to do, stop collecting comics?)

So I come home, go online to pick up a digital copy of the book, and I see this: 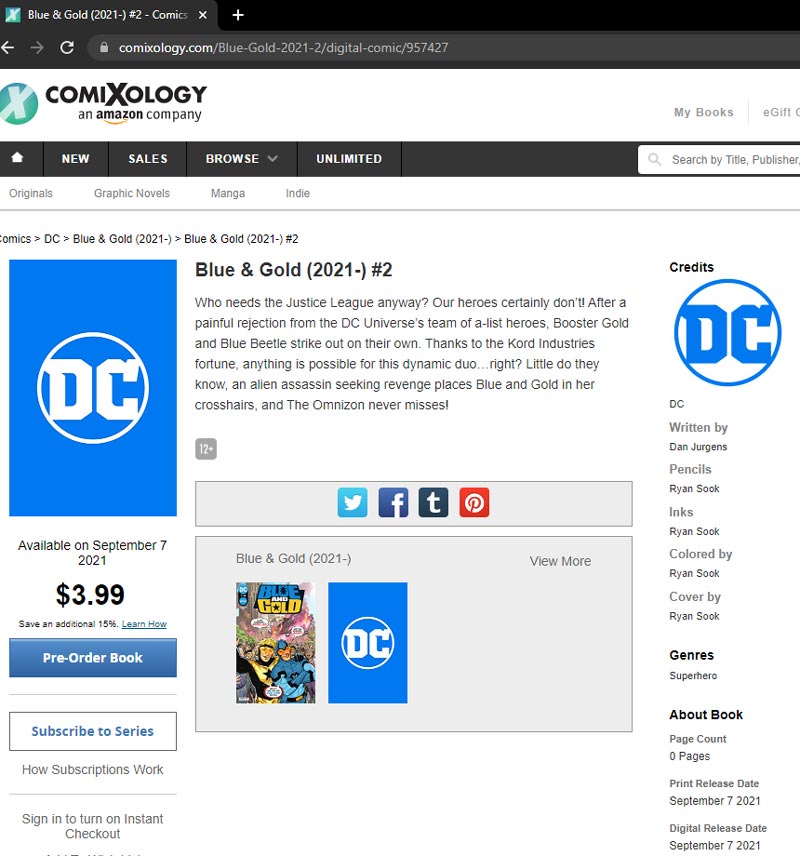 "Available on September 7 2021"?!? The book has been delayed three weeks, and DC hasn't bothered to tell anyone — not even their own web developers?

What could have possibly happened for such a late scrub? Are the shippers on strike? Were editors late getting art to the publishing house? Did it fail to pass inspection by the Comics Code Authority? Are the printing presses in Afghanistan? Or Haiti? Or Florida?

Que sera, sera, I guess. Probably just about everyone in the world — including me — has bigger problems than whether or not I get my hands on any particular comic book. If I have to wait until September 7, so be it.

But how about a little warning next time, DC?

Booster Lantern posted on Aug. 24, 2021 at 10:19 AM
I was equally annoyed by this realization which came AFTER the fact of going to the comic shop. It's the only title I adamantly look forward to and DC is out here acting like it's 1970s Marvel.

"BREAKING NEWS" is not something that a Booster Gold blog has much opportunity to say, but I think this counts.

DCComics.com has just posted... well, here it is in its entirety:

Michael Carter, aka Booster Gold. A scoundrel from the future armed with stolen technology, a time machine and a robot pal named Skeets, is intent on making a name for himself in the past!

Ted Kord, aka Blue Beetle. The inheritor of a proud legacy of crimefighting who had no powers to speak of, but who carried on the Blue Beetle legacy with just his wits and his fists…is armed with a whole lot of gadgets and a sharp sense of humor!

Desperate to regain the spotlight, Booster Gold looks to attract the public’s (and Justice League’s) attention the same way any washed-up, second-rate hero would—social media. The not-so-tech-savvy hero from the 25th century enlists the help of his best friend, Blue Beetle, who possesses both the money and the brains to help his old pal navigate the scary world of internet influencers.

Watch out, evildoers, our heroes are live and online!

(I apologize for reposting the entire solicitation in full, but it feels like a special occasion, like the announcement of an armistice treaty. The original text is posted at https://www.dccomics.com/blog/2021/04/21/dc-comics-proudly-presents-blue-gold-by-dan-jurgens-and-ryan-sook)

If that doesn't make your 2021, Booster boosters, nothing will! (Thanks to all who made sure I saw the news.)

I KNEW this would be the news on here today, soon as I heard.

ithildyn posted on Apr. 21, 2021 at 9:23 PM
The only way I can be sure I am not conjuring this as a most wonderful but entirely wishful dream is that Booster doesn't have the collar...

Booster Lantern posted on Apr. 28, 2021 at 8:59 PM
I'm cautiously excited about this. I trust in Dan Jurgens - certainly a heckuvalot more than Tom King - but I've been so disappointed in comics for years. I AWOL'd with the New 52; I was so angry they cancelled Booster's series and I hated the direction they went.

I've recently found a comic book buddy who shares a lot of my sentiment, and that has encouraged me, oddly enough, to try and dip my feet back into the waters.