Last week, I mentioned as one of the reasons that I still liked single-issue floppies was in large part because I love the cover art. That conditioning led me to do something yesterday that I almost never do: I paid far more than cover price just to buy a variant cover, and it doesn't have anything to do with Booster Gold.

As satisfied as I am to have an Art Adams-drawn Captain Carrot cover (and I consider $40 a small price to pay against the amount I would have paid over the past 3 decades if DC had chosen to give me any ongoing Zoo Crew comics), I do have to admit that the Booster Gold trades were money better spent.

You can still get both Booster Gold: The Big Fall and Booster Gold: Future Lost at Amazon.com (and maybe a Local Comic Shop near you).

This Day in History: Superfriends

As we continue the march to the milestone Action Comics #1000, it's probably worth noting that Booster Gold was seen in previous anniversary issues.

Booster had only been in comics for 2 years when he was included in Action Comics #600, released 30 years ago today. Booster's role was a small one, appearing in a pin-up of the Justice League International by Linda Medley and Art Adams. 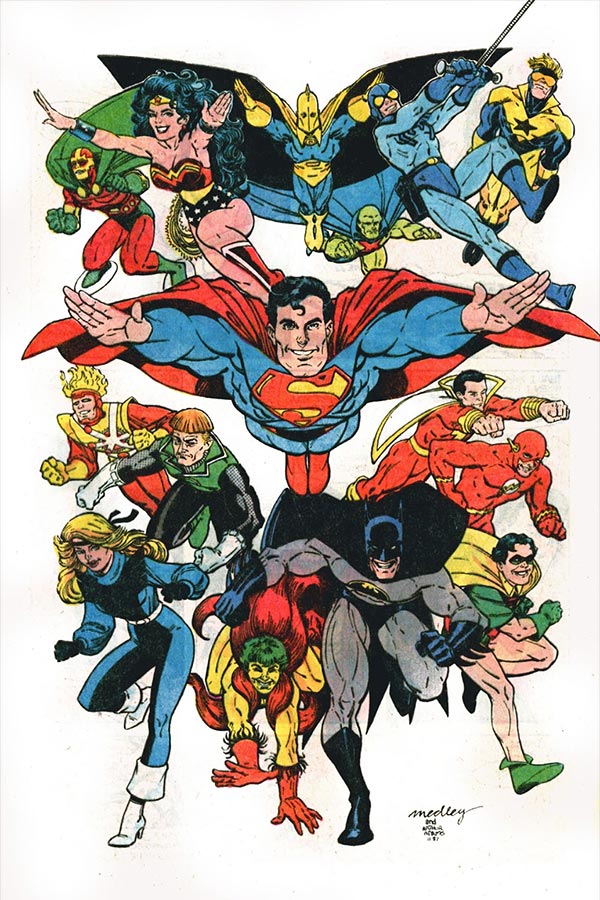 That's a happy bunch. Obviously Booster is pleased to be beside his best bud Blue Beetle, but everyone else seems to be enjoying the occasion as well. Everyone but Guy Gardner. Does that guy ever smile?

Will Booster be reunited with his Justice League pals in Action #1000? I guess we'll find out in April.

This Day in History: Superman's Anniversary

On this day in 1988, Superman celebrated 600 issues of Action Comics. (New to comic books? Don't let this week's Action Comics #39 confuse you. As hard as it may be to believe, DC Comics once promoted Action Comics' status as the longest running comic book by putting really big numbers on its cover. We call those "the good old days.")

Action Comics #600 by by Linda Medley and Art Adams

Of course, Booster Gold couldn't let Superman celebrate a milestone like that without sharing some of the spotlight, so he crashed Superman's pin-up. No one seems to mind much. Even Batman is smiling.

So no sooner do I imply that I'd like to see Howard Chaykin darw Booster Gold than does TheBlotSays come to the rescue. And Chaykin is just one of six fabulous artists he's lined-up in his Booster Gold sketchbook. Check it out: 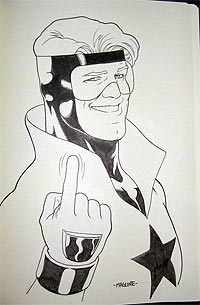 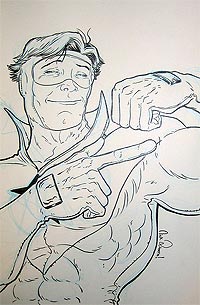 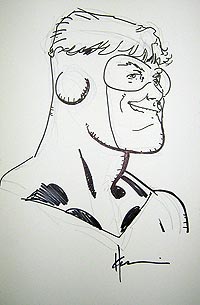 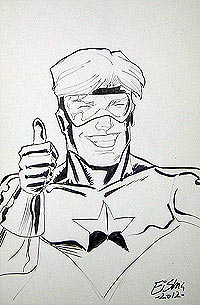 You can see the whole sketchbook in much larger detail (including Art Adam's accompanying drawing of Skeets!) at The Blot Says' Flickr page. And while you're out there, consider popping on over to The Blot's blog, TheBlotSays.com, where you'll find some other pretty awesome articles about art and comics and toys and things. Thanks for sharing, Blot!

[UPDATE 08/20/2012: Speaking of sharing, if you see this message, Jesster, can you please get in touch with me at Webmaster at Boosterrific dot com? There's a fellow looking for some reference art, and I was hoping you might be able to lend a hand.]

Grimmy posted on Aug. 20, 2012 at 2:42 PM
Beautiful Art Adams drawing, that's someone I'd REALLY like to see draw Booster on a regular basis. Nice how he went that extra page for Skeets.

Eyz posted on Aug. 21, 2012 at 4:13 AM
That's right, Art Adams' Booster pretty fun to look at. Different, but still recognizable! (and Skeets!! neat!)
I'd love to see him on a Booster book. Though personally, the original Booster Gold, not the New 52 one..

Frank posted on Aug. 21, 2012 at 6:51 PM
That dude must be from my neck of the woods. I never got it together to get my own Chaykin headshot, but he was in town this May. I think Ben Templesmith has been at every Comicpalooza so far. Nick Pitarra, Joe Eisma and Art Adams were just at Space City Con a week ago, and that Adams got drawn right in front of me, as I had next commission.