I recently saw on reddit someone complain that the first volume of Booster Gold was "boring" but that second volume was their "favorite comic of all time." That made me think about how the second volume was different than the first, which one I liked better, and why.

It's true that the style of Booster's first solo series is very much of its era. It's comprised primarily of the straightforward adventures of a flawed dramatic character struggling to better his position in a serious world. There isn't a lot of humor, and as a new character to the DCU, Booster's world often feels smallish. In many ways, it feels like the first season of a new soap opera.

However, the second series is very much of its era as well, with better paper, better art, and a larger universe to interact with than were available decades earlier. The biggest difference between the two volumes is most noticeable in the stories focusing on its character's inner lives. (It's a dirty word some places, but around here we call the sort of character development Booster and his supporting cast had undergone between volumes "continuity.") It is also often much more humorous.

Honestly, of the two, I think I like the first volume the best. I admit it's imperfect, but I like Booster's rougher edges, naivete, and imperfect understanding of contemporary society. On the other hand, I sure do love the deeper dives into DC Universe history that volume 2 makes possible. And I really appreciate Booster's extended family and recurring villains. Hmm. It's a hard choice to pick only one.

But maybe, just maybe, I like Booster's most recent book best. It re-teams him with his comedy duo partner of the 1990s and has even more humor, both in art and story. If DC Comics should decide to launch another Booster Gold series for his upcoming 40th anniversary in 2025, they could do a lot worse than giving us more Blue and Gold.

I guess what I'm saying is that I'm not that picky. I'll take whatever Booster Gold I can get.

Many comics I loved as a kid are somewhat disappointing when I re-read them as an adult. I find I was looking at them with the rose-colored glasses of nostalgia. The first Booster Gold series isn't one of those. It was genuinely well written and well drawn.

I've been reading comics for the last 30 years but, living in Argentina, I could not read the first series until the "Showcase presents Booster Gold" book came out. So, I read the series 20 years after its release and it felt very fresh and fun.

One thing I miss from old comic series is the time they spent on world building and main and secondary characters personal lives... something that seems to be lost nowadays and that was very interesting (when it was well written).

Who Do You See Here?

I bought and read Dark Crisis: Young Justice #1. For what it's worth, I liked it fine but am at a complete loss to understand how these characters' continuities connect to the characters in Bendis's 2019 Young Justice series. (Why do I care more about continuity than DC does? What's the point of an event series celebrating "legacy" characters if the details of that legacy are an unexplained mystery?) But how I feel about the book isn't what brings me here today.

No, today's topic is "Who is standing behind Booster Gold?" 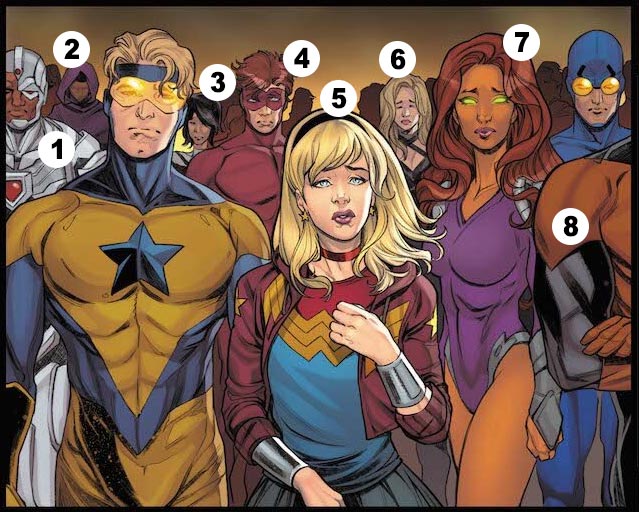 I had hoped that the answer to that question would be in the published issue. It is not. That means that all I have to go on is the image itself. So besides Booster Gold and Blue Beetle, I can confidently identify only (1) Cyborg, (5) Wonder Girl, and (7) Starfire. Who are those others?

The purple hood on number (2) makes me think it is supposed to be Raven or Spoiler, however the darker skin makes me think maybe Vox? (Please don't be Pandora.)

There's a pretty good chance that number (3) is Doctor Light without her headpiece, yet (4) certainly can't be Wally West in his pre-Rebirth costume, can it? For all I know, (3) and (4) could just as easily be Outsiders Katana and Geo-Force.

Things get really weird with number (6). She sure looks like Black Canary, but Canary was a member of the League, and for several weeks, it has been implied that she "died" off panel in Justice League #75. I note neither she nor her fellow leaguers Green Arrow or Zatanna get a statue here or in the same scene Dark Crisis #1. Are they all alive? If so, shouldn't they be leading this memorial service instead of standing in the crowd?

And of course, number (8) is Booster Gold again, right? He loves funerals so much, he's already time-traveled back for more!

Naturally, a definitive answer to these identifications is useful only to totally obsessed fans like me who track fictional character interactions. However, if any of you other totally obsessed Booster boosters have any other guesses, I'd love to hear them.

Some events in the DC Universe are so significant, they are revisited over and over again. How many times have you seen Krypton explode? Or Martha Wayne's pearls? Or the Martian Manhunter's funeral?

I mention that last one for a reason. Manhunter was the first hero to die in 2008's Final Crisis, and his funeral was seen in both Final Crisis #2 and Final Crisis: Requiem #1. And Booster Gold was there both times. (In fact, Booster Gold was seen at DC's most significant funeral of the 21st century again as recently as 2019's Harley Quinn #67. Take that, Krypton!)

Well, it's starting to look like Nightwing's memorial service for the fallen Justice League seen in Dark Crisis #1 is the latest in repeatable solemn events. That memorial service will be seen again in this week's Dark Crisis: Young Justice #1. And once again, Booster Gold is in the crowd, as you can see in the issue preview at aiptcomics.com. 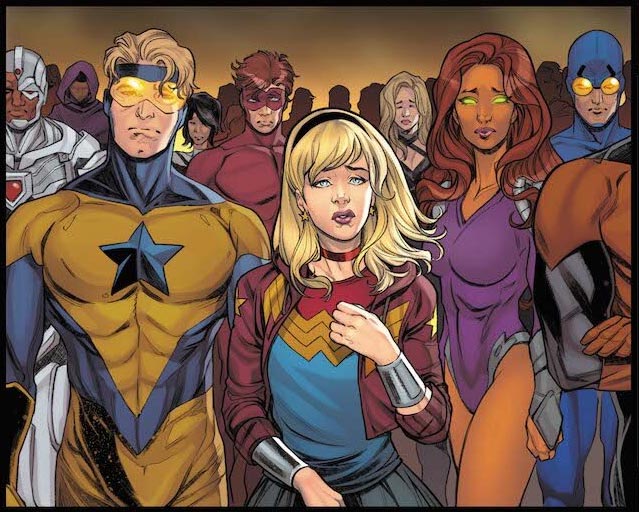 Booster Gold sure must love funerals.

Buy this issue's alternate cover by Todd Nauck (with Snapper Carr in a Booster Gold t-shirt) and make Skeets happy.

It's Already Been a Long Year

As you may have heard, Superman For All Seasons artist Tim Sale passed away yesterday, which means this panel from Challengers of the Unknown #5 (1991) is as close as we're ever going to get to his take on Booster Gold in a DC publication.

Obviously that's *not* Booster Gold. I can't even find a Booster Gold commission drawn by Sale. If you know of one, please leave a link in the comments. I hate to think that we've permanently missed a chance to get his distinctive take on our favorite hero.