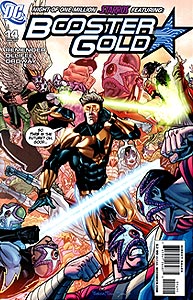 Brief Synopsis: Booster Gold must join forces with a potential future enemy in order to save Rip Hunter from Starro the Conqueror.

Page 1, panel 1
ALTERNATE REALITY: This issue picks up immediately where it's predecessor left off, with Booster Gold facing domination by one of Starro the Conqueror's starfish-spores. Booster explains that only three hours of relative time have passed for him since the start of this adventure which has included trips between the year 1348 and 47-years into humanity's dystopian future. Booster also expresses a desire for Baskin-Robbins' Pistachio Almond ice cream (not one of their original "31 flavors" from 1945, though since the flavor's debut in 1964, it has become one of the ice cream chain's "classic flavors") and a novel by James Ellroy (the hardboiled crime author responsible for the bestsellers L.A. Confidential and The Black Dahlia). Ah, Booster, truly a man of the people.

Page 1, panel 3
POWER UP: This is not the first time that Booster has demonstrated a functional knowledge of his power suit's circuitry, having previously rewired his force field to generate an external field in Booster Gold, Vol. 1, #17. However, this is the first time he's been seen doing it blind and without the assistance of Skeets.

Page 4, panel 1
The line "resistance is futile," is a commonly repeated theme phrase from the late 1980s television show Star Trek, The Next Generation. It was often used by an alien race called the Borg who, like Starro, was determined to conquer the universe by adding all sentient life to it's hive-mind.

Page 4, panel 2
POWER UP: Skeets II arrives in time to save Booster from Starro-controlled Lady Chronos, Chronos, and Solomon Grundy. Skeets was not transported to the future alongside Booster in the previous issue, so his appearance here is attributable to his own powers of time-travel.

Page 5, panel 2
Booster and Skeets find the corpses of Batman and Power Girl inside the Justice League's Hall of Justice in Washington, DC.

Page 5, panel 3
Identifiable inside the Hall of Justice's "confiscated weapons vault" are Black Manta's costume and trident, Captain Boomerang's hat and boomerangs, Penguin's umbrella, a red lantern, and Mr. Freeze's gun. (Other panels also show the robot Toyman, Captain Cold's cloak, and an oversized Joker mask.) Really, there has never been a hero who has spent more time looting vaults and trophy cases for weapons to win battles than Booster Gold. 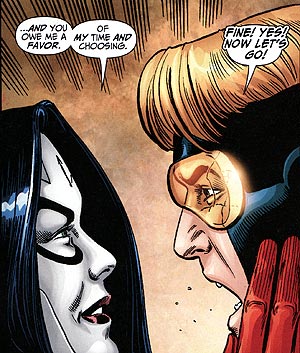 Page 11, panel 1
In order to enlist her aid against Starro, Booster agrees to do Lady Chronos a favor of her "time and choosing." For the third time in recent months, Booster finds himself dealing with Lady Chronos, who again hints that she may have a crucial role to play in Booster's future.

Page 14, panel 3
For the first time, Booster Gold confronts Starro the Conqueror directly in order to save Rip Hunter.

Page 18, panel 3
...she uses her power of time manipulation to prevent Starro from releasing a Time Sphere full of spores over the Hall of Justice. Apparently the "time clock" is useful only for personal time travel, not time-manipulation.

Page 20, panel 1
The mysterious disappearance of Daniel Carter's starfish spore (see previous issue for details) is explained by the intervention of Chronos. And when I say explained, I mean complicated beyond understanding. If Chronos had the missing starfish the whole time, Rip Hunter would never have been dominated by Starro. If Hunter had never been dominated by Starro, Chronos would not have been able to trace Lady Chronos to Hunter's laboratory. In any event, this impossible situation is a direct result of the impossible situation that directly preceded it, namely Lady Chronos' destruction of a younger Rip Hunter while an older Rip Hunter sat nearby. Confused yet? It seems that whenever the "Chronos Twins" are around, the impossible isn't just possible, it's mandatory.

Page 22, panel 2
BORROWING THE CAR: Booster returns Mr. Freeze's gun mere seconds after he had taken it. Booster must replace the gun in the past so that it is available for his use in a future in which will now never take place. At least one thing worked out in a chronological manner after all.

Boosterrific Review: To quote Rip Hunter, "you have no idea what happened here." The art is great (the comic is probably worth buying for the Batista/Gray cover alone), the action comes fast, and there are no shortage of guest stars. Yet, for all its cleverness, Rick Remender's story devolves into a indecipherable mess that leaves the reader confused and somewhat dissatisfied, as though the real story of the issue is being told somewhere else. If not for that lingering disquiet, this would probably be a perfect issue.

(2 votes)
Erin (Aug. 6, 2010, 16:15:22)
This plot fits nicely into Remenders' work on The All New Atom with Chronos and Lady Chronos. Their connection to Booster and Rip is interesting but never explored fully. Seeing Rip lose his cool was disturbing and his temper with Lady Chronos really made me see him as Boosters' son acting on his emotions. The issue is one of those reads that if you think about it you'll be confused. Nice character moments for Booster who shows real concern for Rip, acts like a pro when dealing with Starros' thugs but still makes a hasty bargain that may come back to bite him. I can honestly say that I never thought of Starro as that threatening or scary until this arc.
KMD (Dec. 11, 2009, 11:29:45)
Thank you magic hand. Fun issue even if it goes by in a blur. I thought they would flesh out the whole Lady Chronos angle...and over a year later....nothing....