“Around the World with the Justice League” 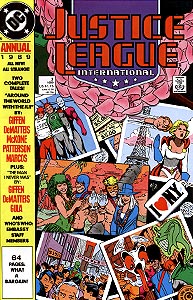 Cover Description: Pictures, tickets, keychains, coins, and other souvenirs of the travels of the JLI include pictures of Flash, Guy Gardner, and Metamorpho; Elongated Man with Power Girl before the Eiffel Tower; Fire, Blue Beetle, Booster Gold, and Ice on a tropical beach, Martian Manhunter in a crowded Asian city; and Metamorpho and Guy Gardner making faces at a British beefeater.

Brief Synopsis: Maxwell Lord leads the JLI on a tour of their worldwide embassies while Martian Manhunter searches for him to introduce him to some landowning diplomats.

Issue Notes: This issue contains two stories. The second story, "The Man I Never Was," does not contain an appearance by Booster Gold.

Page 11, panel 2
Beetle is very irritated that the Brazilian JLI Embassy has a swimming pool while the New York Embassy does not. Considering the fact that all JLI Embassies have teleporters installed for immediate transportation, this seems an odd and pointless gripe.

Page 19, panel 2
Booster and Beetle speculate that the Flash's sense of humor and attitude may be entirely compatible with theirs. If the three weren't in different branches of the League, perhaps they would have been known as "Blue and Gold and Red."

Page 27, panel 2
FIRST APPEARANCE: First appearance of Joshua Barbazon, the Canberra, Australia JLI Embassy Chief. The Australian JLI Embassy was destroyed during the Invasion! mini-series, but re-construction is in progress.

Page 30, panel 1
The globetrotting Leaguers finally arrive at the Paris JLI Embassy, where for the first time Booster Gold meets Sue Dibny, Elongated Man's wife and an honorary member of the Justice League.

Boosterrific Review: This issue features two stories, "The Man I Never Was" and "Around the World With the JLI!", both enjoyable but largely forgettable, character-driven tales worth a read.