Cover Description: Guy Gardner uses his ring to tickle the nose of Kilowog in the hopes of winning an arm wrestling contest. (No Booster Gold.)

Brief Synopsis: While Guy Gardner and Kilowog attempt to murder one another, Blue Beetle and Booster Gold try to sell the natives of KooeyKooeyKooey on the concept of a JLI casino/resort.

Issue Notes: This issue marks the beginning of one of the most famous of Booster's enterprising adventures: the founding of Club Justice League on the island of KooeyKooeyKooey. 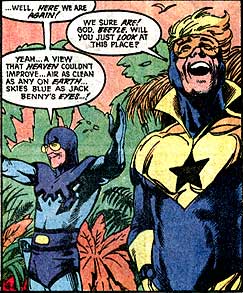 Page 5, panel 3
FIRST APPEARANCE: Arriving on the beach of KooeyKooeyKooey (previously mentioned in Justice League International Annual #3 but first seen here), Blue Beetle compares the sky to the blue color of Jack Benny's eyes. While it's true that Jack Benny did have blue eyes, he died in 1974, over 15 years before Beetle makes this comment. That's dedication to a comedian, especially since so much of Benny's work was on the radio and television before the days of color.

Page 5, panel 5
As Blue Beetle begins to tell Booster Gold about his plan for KooeyKooeyKooey, Booster calls Beetle, "Maynard," a reference to the wacky, lazy Beatnik character Maynard G. Krebs on the early 1960's television show The Many Loves of Dobie Gilis. Coincidentally, Krebs was played by Bob Denver, the same actor who would go on to play Gilligan, the hapless first mate shipwrecked on a pacific island in Gilligan's Island.

Page 6, panel 5
Puck, the grandson of the Chief, was named for the mischievous fairy in William Shakespeare's play, A Midsummer Night's Dream. The play was first adapted into a Classics Illustrated comic book in 1951, although it was republished several times throughout the 1960s.

Page 10, panel 1
As Beetle tries to convince the Chief of KooeyKooeyKooey to approve a casino on the island, he references "Frank, Dino, Sammy, and Liza." The Rat Pack, an informal and motley crew of singers and actors who made up a comedy team and popular stage and screen act during the 1950s and on, generally centered around Frank Sinatra, Dean "Dino" Martin, and Sammy Davis, Jr. Liza Minelli was the daughter of original Packer Judy Garland, and performed with the others in the 1980s.

Page 11, panel 5
Beetle's argument for a casino on KooeyKooeyKooey doesn't begin to sway the chief until he mentions Gavin McLeod, the actor who played Captain Stubing on The Love Boat. Apparently, the chief isn't interested in meeting one of the richest men in the world, Donald Trump, or superstar rock group Bon Jovi, just a balding, middle-aged actor.

Page 19, panel 2
Returning to New York, Booster takes credit for convincing the Chief of KooeyKooeyKooey to allow the JLI to build a casino on his island.

Page 20, panel 5
Booster and Beetle enlist Kilowog to build their resort. Kilowog is an alien member of the green Lantern Corps and an accomplished engineer.

Boosterrific Review: Reading the horseplay and tomfoolery contained in this issue makes it easier to understand why some insist that the Justice League International was composed entirely of slapstick and buffoonery. Yet the jokes in this issue are genuinely funny and the humor is character driven. (Even if one takes issue with the evolution of Blue Beetle and Booster Gold since joining the Justice League, there can be no doubt that the characters have gradually evolved into the comic relief of the series, a role that the characters wear well.) A great comic book.