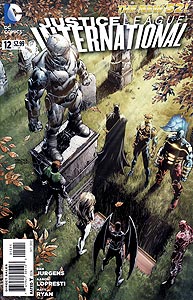 Brief Synopsis: The Justice League International is ambushed while paying last respects to their fallen comrade.

Issue Summary: Batman is in combat with Lightweaver's brother, Malik, in the Tkhvin Cemetery. Malik appears to have inherited his brother's power to manipulate light.

In flashback, August General in Iron. Batwing, Booster Gold, Godiva, Guy Gardner, and OMAC are seen arriving at the cemetery in their new plane to pay respect to their fallen teammate, Rocket Red. They debate their future as a team and talk to Ice and Vixen, who both remain in the hospital. The team is unexpectedly ambushed by Malik, who seeks to avenge his brother's death.

Batman was watching from afar and enters into guerrilla combat with Malik, eventually defeating the youth. Guy Gardner give Malik a stern lecture. When Malik expresses regret for his actions, he is allowed to escape.

Batwing leaves the JLI, but the rest of the team agrees to stay together in a new headquarters financed by Batman.

Issue Notes: This is the final issue of this series.

Story Notes: The plot point of a grave-side ambush of mourners by a brother seeking revenge will be familiar to long-time Justice League readers. A very similar plot was used in Justice League America #96 in 1995.

Page 5, panel 6
Batman is also in the cemetery, though he does not reveal his presence to the team. Like the rest of the JLI, Batman was captured by the Burners in #10 but was nowhere to be seen in Justice League International #11.

Page 7, panel 1
Batman alludes to his first meeting with Booster. According to Dan Jurgens in an August, 2, 2012, interview with Russ Burlingame at ComicBook.com, "there was a particular story we had in mind that was actually going to be our issue zero. Sadly, we didn't get there." All ongoing DC Universe books published with a November 2012 cover date will be numbered 0 and contain origin stories. Because this is the last issue of Justice League International, it will have no zero issue, and the story of the first meeting between Batman and Booster Gold in the New 52 DC Universe will remain untold.

Page 7, panel 4
Ice and Vixen join the JLI at the grave statue of Rocket Red via a holographic projection of Green Lantern's ring. Fire — still in an induced coma — is mentioned, but not seen. It is explained that the team intentionally avoided attending the funeral for their teammate to avoid being a "distraction." Tikhvin Cemetery is the final resting place of several of Russia's greatest artists, including author Fyodor Dostoyevsky and composer Pyotr Tchaikovsky.

Page 9, panel 7
Booster Gold agrees to keep the JLI together despite losing both Rocket Red and the United Nations' support. Godiva pledges her support, even if the team has to call itself the "Booster Bunch." Green Lantern might not like the name, but I think it has a certain ring to it.

Page 10, panel 1
SPOILER WARNING!: The JLI is confronted by Malik, the brother of Lightweaver. Malik gained his brother's power to manipulate light when Lightweaver was killed in Justice League International #11. Reveal

Page 12, panel 4
POWER DOWN: Booster Gold is disabled by Malik's blast. What good is having a nigh-impenetrable force field, Booster, if you don't use it?

Page 15, panel 4
After Batman defeats Malik, the entire JLI regain consciousness to lecture the boy. Was Malik somehow keeping the team down?

Page 17, panel 4
Batman tells Booster that a new JLI headquarters is being built in Washington, D.C. Though Batman doesn't explain where the financial backing for the team will be coming from, it is easy to infer that Bruce Wayne will be behind the funding. An editorial note indicates that the "New HQ" will be seen in Justice League International Annual #1, but before anyone sees it...

Page 18, panel 3
Figuring that Malik's assault on the JLI and destruction of several monuments in Tikhvin Cemetery was a side effect of Malik's grief over losing his brother, Green Lantern lets Malik simply run away. According to Dan Jurgens in the previously quoted interview at ComicBook.com, "I'll just say we had plans to use Malik further and leave it at that. [The creators of Justice League International Annual #1] have something else in mind and didn't want to deal with Malik, which is understandable. With that in mind, we decided to conclude his involvement and get him off stage."

Page 19, panel 5
Booster declares that he and Green Lantern are now the "Green and Gold!" This is a clear allusion to Booster's long-running "Blue and Gold" partnership with another colorful hero, Blue Beetle.

Page 20, panel 2
HIS STORY: Booster claims that his past, our future, is "hard to remember sometimes." Is Booster playing coy about his knowledge of future events, or is he honestly affected by changes to history — such as the events of Flashpoint — that effect his memory?

Boosterrific Review: This issue is indicative of everything that has been wrong with this series: things seem to be happening just because something has to happen, with no rhyme, reason, or resolution. Why is Batman the centerpiece of this issue when no reason is given for his absence last issue? Why can't Booster Gold or Guy Gardner defend themselves from an ambush when they weren't even the first attacked? Why is the antagonist allowed to just walk away? Very unsatisfactory ending to an unsatisfactory series.