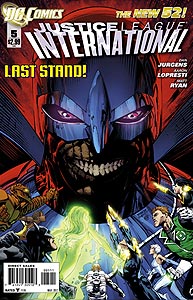 Brief Synopsis: The Justice League International fights Peraxxus with the fate of the world resting on the outcome.

Issue Summary: As the public begins to panic about the pending destruction of the Earth by the alien Signal Men, the governments of the world launch an attack on Peraxxus's orbiting space ship. Peraxxus defenses prove impregnable.

Meanwhile, Booster Gold and Guy Gardner temporarily set aside their differences in order to rescue the Justice League International from their trap beneath the jungles of Peru. Booster contacts Andre Briggs only to learn that the United Nations' failure to defeat Peraxxus through military might means that the JLI is Earth's last hope.

The gravity of the situation causes Godiva to express doubt about her abilities, but Ice is quick to come to her defense. Elsewhere, United Nations Director Bao expresses similar displeasure to Briggs and Emerson Esposito about the effectiveness of their Justice League International.

The JLI sacrifices their new plane as a decoy in order to sneak aboard Peraxxus' ship undetected. The team splits in to two teams, one focused on shutting down the computers overseeing the destruction of Earth, and one out to confront Peraxxus himself.

Though Peraxxus easily defeats his attackers, including the obviously out-classed Godiva, Rocket Red is successful in disabling Peraxxus' mining operation. Peraxxus flees as Gardner guides the ship in a crash-landing on Earth that destroyed the Peruvian giant.

Page 2, panel 2
As in the previous issue, the energy of the four Signal Men can be seen erupting from the Earth. According to the story, the Signal Men are in Canada (green energy), Peru (yellow energy), Russia (red energy), and South Africa (blue energy). However, of the energy beams seen on this panel, only one, the red energy beam, aligns with its corresponding geographic location. In this panel, the green energy seems to erupt from Nigeria instead of Canada; blue energy from Japan instead of South Africa. Two panels later, yellow energy can be seen coming from the Indian Ocean instead of Peru. This is the second issue where the artists appear to either not be reading the scripted story, or have no understanding of world geography.

Page 5, panel 1
POWER UP: Booster's force field is powerful enough to shield 9 humans from forces powerful enough to break up the Earth's crust and send it hurtling into space. This must be a tremendous drain on the batteries in Booster's Mark XIII suit. It also appears that the mass of the material within the force field bubble is too great to move via Booster's Flight Ring, hence Booster's plea to Gardner for assistance. (The fact that Booster's force bubble looks similar to Rip Hunter's Time Sphere is, according to Dan Jurgens' interview with Russ Burlingame at comicbook.com, "rather intentional.")

Page 6, panel 4
Via hologram, Booster Gold is updated on the severity of the situation by his supervisor, Andre Briggs. Together the pair watch, almost nonchalantly, as the Peruvian Signal Man destroys two approaching fighter jets. Were these jets perhaps pilot-less drones?

Page 6, panel 7
FASHION ALERT: This is the first panel in this issue in which any attempt is made to color any part of Booster's mask gold. Here, and on three other occasions in this issue, the back of Booster's cowl is colored gold, but not the front. It appears that after only 4 issues, colorist Hi-Fi Designs has given up on Jim Lee's design of gold trim outline around Booster's face.

Page 10, panel 2
The JLI has made a temporary rocket out of a large chunk of rock. The propulsion is provided by Fire with an assist from Rocket Red, but it is not clear what is providing atmosphere for the heroes. Booster's force field, perhaps?

Page 11, panel 4
When Batman harshly demands that the team "save the platitudes," his comment is directed at Rocket Red calling August General "most heralded," not "spasibo," which translates from Russian into "thank you."

Page 12, panel 3
Despite their earlier difficulties, Gardner appears to be making an effort to make amends with Booster in this panel. This Guy Gardner is a far cry from the man who once bullied all around him in a different Justice League International. Together, the pair will lead their team against Peraxxus...

Page 20, panel 2
SPOILER WARNING!: Booster summarizes recent events as he is debriefed in Peru by Andre Briggs and Emerson Esposito. Booster is confident that the mission was a success before he is reminded that "lives were lost," a reference to the science team that the JLI was originally sent to rescue in issue #1. Reveal

Boosterrific Review: Despite some characterization that appears inconsistent with earlier issues, the fast-paced action of this story's finale is engaging and satisfying, making a strong foundation for the series to grow from.

(1 vote)
CDN (Jan. 5, 2012, 03:49:16)
The action seemed quick and to the point, which I enjoyed. I had a feeling, as I was reading, that once Godiva started doubting her abilities that it would take Booster being put in harms way before she snapped out of it. Some subtleties I noticed in the book was the portion where Michael called Fire 'Bea'. While a common short for her name, most times a person needs to have a close relation with the other to be able to shorten the name. Perhaps in DCnU, the two still shared some close moments? I'm enjoying the budding relation between Guy and Mike as well. Without a Ted in DCnU, who's there to be Booster's closest buddy-bud?