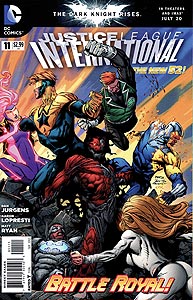 Brief Synopsis: The members of the Justice League International fight the anarchist Burners on the steps of the United States Capitol.

Issue Summary: The remaining members of the Justice League International have been captured by the Burners, and await execution on the steps of the United States Capital Building in Washington, D.C. After Breakdown harangues the assembled crowd of protesters and press, he attempts to deconstruct August General in Iron. Guy Gardner taunts OMAC into a rage, and in his fury OMAC frees the rest of the JLI from Lightweaver's hard-light prison.

Crosscut attacks the newly arrived U.S. Armed Forces. Batwing and Godiva tackle Intersek. While battling Guy Gardner, Lightweaver is hit by a tank shell before the eyes of his little brother, Malcolm. August General in Iron hits Breakdown so hard he explodes into millions of pieces.

Story Notes: Perhaps coincidentally, this story containing scenes of a violent fight between United Nations forces and anarchist bombers on the steps of the U.S. Capitol building was released on the American Independence Day holiday when many American celebrate their patriotism via fireworks displays.

Page 2, panel 1
At the conclusion of the previous issue, the JLI (August General in Iron, Batwing, Booster Gold, Godiva, Green Lantern Guy Gardner, and OMAC) was defeated by The Burners (Breakdown, Crosscut, Intersek, and Lightweaver) in New York City. Now the JLI are being held captive in Washington, D.C. An undisclosed amount of time must have passed, perhaps allowing an opportunity to explain why Batman, who was shown clearly captured at the end of last issue, is nowhere to be seen in this entire issue.

Page 4, panel 2
MEET THE PRESS: Breakdown's speech on the steps of the United States Capitol Building to an assembled angry mob is being captured by a professional camera crew and broadcast live. Do no other heroes in the DC Universe notice this?

Page 5, panel 4
When help does arrive, it is unclear who, exactly they are. The United States Capitol has its own exclusive police force of nearly 2,000 members, the United States Capital Police. However, they are a civilian police organization and do not have direct access to military tanks. Have the Burners already dispatched the Capital Police, requiring the activation of the U.S. Armed Forces? [On the question of which branch of the Armed Forces this force represents, Morgenstern notes in the Boosterrific Forum that "while the regular U.S. Armed Forces (in contrast to the National Guard) can't usually be used on home ground, this applies only to states. Washingtion, D.C. is not part of any state so this rule does not apply. Regular forces have been used in D.C. in the past (during peace time), for example to crush the Bonus March protests in 32."] Whoever these soldiers are, they are quickly electrocuted by Crosscut. It is unclear whether Crosscut is attempting to murder or incapacitate (as he had Guy Gardner two panels earlier) these soldiers. 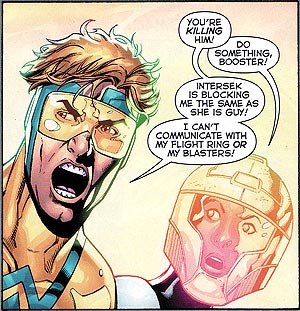 Page 7, panel 2
POWER DOWN: Besides being caged by Lightweaver's light constructs, Booster is still powerless from Intersek's interference with his technology. Some days it doesn't pay to be a technology-based hero.

Page 10, panel 1
Patrons of a bar in an undisclosed location act largely indifferent to the televised news feed of the Justice League International battling a team of super-powered anarchists in the nation's capital. Even given that the DC Universe is full of super-powered people constantly involved in fist fights, it is nigh impossible to believe that the majority of the American citizenry wouldn't be concerned with a battle between the forces of order and chaos at the doorstep of the nation's governing body.

Page 11, panel 4
Minutes later those same bar patrons praise the JLI, "especially Booster." Says one anonymous blond woman, "he can be my star anytime." As much as I enjoy seeing Booster receiving praise, the reaction of this bar's patrons seems particularly discordant with the severity and violence of the battle playing out on the television.

Page 14, panel 4
Lightweaver is hit squarely by the blast from some form of tank gun. The tank looks vaguely like a M1 Abrams, the primary battle tank of the United States military.

Page 16, panel 1
SPOILER WARNING!: After Booster Gold has beaten Breakdown, August General in Iron quite literally rips the villain to shreds. Even given that the United States Armed Forces was willing to shoot tank shells at Lightweaver two pages ago, is this incredibly messy act of violence justified? Guy Gardner's narrated approval and Booster Gold's big smile indicate that they think so. Reveal

Page 18, panel 4
SPOILER WARNING!: Booster Gold is able to end OMAC's rampage with a calming speech, exactly the opposite means by which Guy Gardner was able to get OMAC riled up earlier in the issue. Is OMAC so unstable that a couple of choice words can either chain or unleash his inner beast? Reveal

Page 19, panel 3
SPOILER WARNING!: Pleased at surviving their ordeal, Booster Gold and Godiva share a first kiss before their teammates and a couple of members of the press. Reveal

Boosterrific Review: Something about this issue feels distinctly anticlimactic, maybe because the issue's story boils down to nothing more than "dysfunctional hero team comes together to defeat stock super-villains." While I might have thought it would be nice to have an old-fashioned story resolution in a team-based superhero adventure, this conclusion ultimately feels less nostalgic than it does lazy.

(1 vote)
Rachel (Jul. 16, 2012, 21:21:51)
What a horrible conclusion to a horrible reboot series. Booster seems terribly out of character and what's with the kiss? He seemed to be disgusted by her flirting only a few issues ago! I was really disappointed by this entire series, and the end of this issue just made everything worse.