Brief Synopsis: Overmaster arrives to bring about the end of the world.

Story Notes: This issue's story is part of the "Judgment Day" storyline running throughout the Justice League titles. The title to this story references "D-Day," the codename for the Allied Nations invasion of Axis German-occupied France during World War II on June 6, 1944. More fittingly for Booster Gold, this issue features his fatal encounter with Devastator.

Page 4, panel 5
Booster stands nearby and listens in on Beetle's communication with Maya and Lionheart from Katmandu, the site of a major earthquake as revealed in Justice League America #87.

Page 8, panel 2
HIS STORY: Booster reveals that he has knowledge of present events that will pass into the historical record in the 25th century. This is Booster's first admission that he has knowledge about his activities with the Justice League in the 20th century. Booster is confident that he will play a significant part in stopping the invading alien Overmaster.

Page 10, panel 3
Beetle is furious with Booster for not warning him about his beating at the hands of Doomsday. Beetle also challenges Booster's courage, insinuating that if Booster always knows the outcome of his fights, he's not much of a hero. This is not the first time that these charges have been leveled at Booster Gold, and they will not be the last.

Page 10, panel 7
Booster encourages Beetle to call a press conference so that Booster can announce saving the world from the Overmaster. Booster borrows from Andy Warhol's famous line regarding "fifteen minutes" of fame. Perhaps Booster has already forgotten his early days, when he was a Metropolis superhero enjoying more popularity than Superman. He was even on the fast-track to play himself in Booster Gold: the Movie.

Page 13, panel 2
POWER UP: Booster's flight up Mount Everest is clearly powered by jets in his boots. Despite Skeets' warning in Justice League America #87, Booster chooses to use the armor's boot-jets over his Legion Flight Ring. Perhaps the boots are faster than the ring in the assent up Mount Everest, the tallest mountain in the world.

Page 19, panel 1
Booster gets a little carried away with his visions of grandeur, comparing the battle against the Cadre with his days as a football star.

Page 19, panel 4
FASHION ALERT: The return of the disappearing/reappearing star on Booster's back (seen as far back as Justice League America #34). On page 10 of this issue, Booster's back was shown to have no star. Yet here on page 19, he has a star. Previously, this star only appeared and disappeared between issues. Now it relocates within 10 pages! Clearly the Mark III armor is more advanced than the original Mark I power-suit. 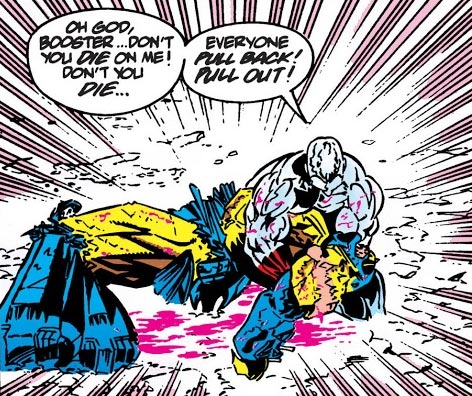 Boosterrific Review: Dan Vado's story of the Overmaster is familiar but engaging. Marc Campos' art is not getting any better. Boosterrific is rating this book as average primarily because of the significant and tragic events that befall Booster Gold rather than any notable achievement on the parts of the writer or artists.