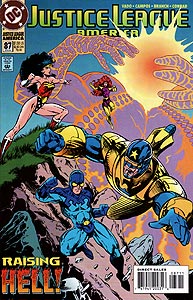 Page 1, panel 1
POWER UP: Booster Gold poses in his new Mark III armor, enjoying its look. Blue Beetle II and Skeets watch from nearby. Beetle admits that this armor is only cosmetically changed from the previous version. Skeets confirms that Booster's only reliable power while within this cobbled-together armor is Booster's Legion Flight Ring. Skeets seems to be paying so much attention to Booster's armor that he has forgotten that he and Booster are from the 25th, and not the 30th century.

Page 2, panel 5
Maxwell Lord arrives to chastise Booster for failing at his current job on monitor duty, missing the news of an earthquake in the Himalayas near Katmandu measuring 8.1 on the Richter Scale. Katmandu is the capital and largest city of the southern Asian country of Nepal. It has a population of well over one million inhabitants. Magnitude 8 earthquakes happen about once per year somewhere on the Earth.

Page 4, panel 2
FASHION ALERT: Booster balks at Lord's sudden mood swing and aggressive orders when Captain Atom reports that he and Ray II have come under fire from Dreamslayer, leader of the Extremists. The star on Booster's forehead is now colored gold, not the blue seen in the previous issue.

Page 20, panel 3
Booster gives one of his pep talks to Bloodwynd, who appears intimidated by a towering manifestation of Dreamslayer. Despite Dreamslayer's history with the League, Booster has never before directly encountered the psychic villain from another universe.

Boosterrific Review: For a change, the art and script are in perfect accord: both are terrible. Case in point: for reasons that remain entirely unexplained, long-time League foe and would-be world conqueror T.O. Morrow has an honorary statue in Justice League headquarters. And of course the bust looks nothing like him. Ugh.