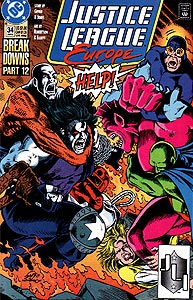 Brief Synopsis: The three-way fight between Despero, Lobo, and the Justice League comes to a surprising conclusion.

Issue Notes: "Breakdowns: Part 12": This is the twelfth issue of a multi-part story crossing through Justice League America and Justice League Europe dealing with changes in the League following the loss of Maxwell Lord's guidance.

Story Notes: The title of this story is a reference to the poem "The Second Coming" by William Yeats. 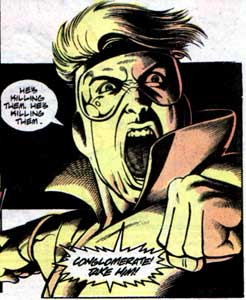 Page 1, panel 1
Booster Gold leads the Conglomerate in an attack against Despero. Heroes pictured in the action are Echo, Flash III, Martian Manhunter, Maxi-Man, Praxis, Reverb, and Vapor. This is Despero's second attack on the Justice League in the past two years.

Page 2, panel 3
Several newer members of the Justice League join the Conglomerate in the fight against Despero in order to save the Flash. Pictured heroes include Bluejay, Crimson Fox, Elongated Man, General Glory, Ice, and the Silver Sorceress. With the exception of Elongated Man and Ice, this is the first time that Booster has been in battle alongside any of them.

Page 5, panel 4
In a bit of turnabout from the previous issue, it is Lobo that saves Booster Gold from Despero via a timely intervention.

Page 9, panel 3
Following the surprising conclusion to the battle with Despero, a brash Booster Gold nearly picks another fight with Lobo. Apparently with Guy Gardner down for the count, Booster feels compelled to pick up the slack in loud-mouthed challenges.

Page 10, panel 2
Booster returns to the Justice League Cave alongside Catherine Colbert, Crimson Fox, Elongated Man, General Glory, Kilowog, L-Ron, Metamorpho, Power Girl, Rocket Red #4, for a confrontation with Manga Khan. Despite all of their previous appearances within the same issues, this is the first time that Booster and Manga Khan have faced each other as humanoids. (They had met once previously while Manga was separated from his humanoid armor and in his natural energy state in Justice League America #21.)

Page 18, panel 2
While giving Booster a lift back to the Conglomerate headquarters in his flying Bug, Blue Beetle kids Booster about returning to the Justice League. Booster doesn't issue a denial, he simply ignores the comment.

Boosterrific Review: Most of this issue is set-up for another yet another conflict in the never-ending "Breakdowns" storyline, which continues an ongoing paradigm-shift for the status-quo of the Justice League International. This sort of exposition may be necessary, but when the story grows this long, the slow grind can be very exhausting to creative teams and readers alike. While this may be a fine issue, it certainly is beginning to feel like more of the same.