Boosterrific.com
>
Comics
>
Eclipso: The Darkness Within #2

Eclipso: The Darkness Within 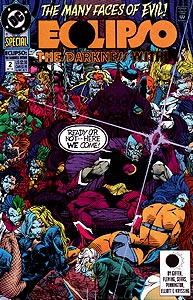 Brief Synopsis: The heroes of the DC Universe assemble to combat Eclipso on the Moon.

Issue Notes: The story in this issue ties into the summer-long "Eclipso: The Darkness Within" storyline running throughout the 1992 DC annuals. The title of this issue is taken from a quote attributed to English artist Sir Max Beerbohm. 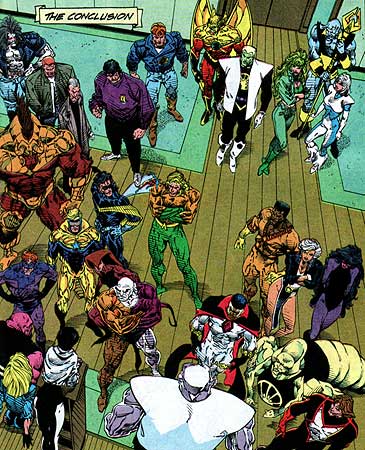 Page 14, panel 4
Booster Gold announces to Vril Dox that the heroes from Earth are unwilling to kill Eclipso, proving a moral compass rarely seen. Unlike many of his fellow heroes, Booster wears no visible life support system. This is contrary to several of his previous adventures outside the Earth's atmosphere, though completely in line with Skeets assessment of the abilities of Booster's Force Field in Booster Gold, Vol. 1, #7.

Page 22, panel 5
Elipso takes direct control of Booster Gold along with the rest of Earth's heroes invading his sanctum. This is the third time this year that Booster has been mind controlled. (Although, two of those instances were engineered Eclipso.)

Page 37, panel 2
Though Booster is not shown, he is presumably among the heroes rescued from Eclipso's control by Bruce Gordon and his team of Eclipso hunters, including Blue Beetle II, Chunk, Dr. Light IV, Dr. Will "Doc" Magnus, Emil Hamilton, Kilowog, Lex Luthor, Simon Bennett, and Zena Moonstruck.

Page 53, panel 3
Things in the DC Universe seem to be getting back to normal as Booster Gold and Blue Beetle joke about Vril Dox on the way back to Earth.

Boosterrific Review: Bart Sears art appears rushed in this drawn-out conclusion to the summer storyline running throughout the 1992 DC annuals. It is unfortunate that a DC hero was sacrificed for unnecessary shock value in this story that completely fails to leave any impact on the DC Universe at large, but such is par for the course in these major crossover events. Not that there is anything really wrong with this story, it just fails to be anything more than a standard "heroes vs villains" battle royale, unbefitting of the build-up it was given across the DC Universe.