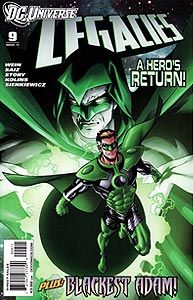 Cover Description: Parallax and the Spectre loom over an eclipsed sun. (No Booster Gold.)

Brief Synopsis: A retired police officer recounts his memories of his life in the DC Universe.

Issue Notes: The events in this issue are told through flashback of the frame story protagonist, Paul Lincoln, now a very old man. It is unclear whether this rearranged chronology is an accurate history of the DC Universe following the Infinite Crisis, or whether the anachronisms are due to the failing memory of an old man. It is important to note that Lincoln himself has aged considerably since the events pictured herein, but the heroes have not.

This story has been reprinted in:
DC Universe: Legacies (2011)

Boosterrific Review: This condensed version of Final Night and Day of Judgment fails to capture the energy or drama of either series. However, the real problem with this issue is not its deification of Hal Jordan, but rather its denigration of other DC icons: Superman calls a young hero "stupid," and Batman wastes his time whining, "what the hell are we going to do now?" Maybe the DC history does need a whitewashing, but that's all the more reason to get the characters right. Thanks to Jesus Saiz, this issue is beautiful to look at, thanks to Len Wien, it is painful to read.