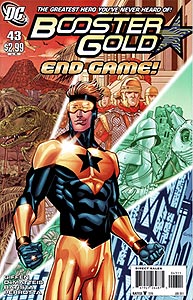 Page 1, panel 1
When the narration for the opening says, "sometimes my life makes no sense," you should really take the statement to heart. This is the first of several instances where it appears that Booster is speaking directly from the writers to the audience.

Page 1, panel 3
Booster Gold has arrived in "the 30th century." He explains that he was most recently speaking to Rip Hunter and Michelle Carter about his time in prison. The last issue ended on a cliffhanger at the end of the Earth, a cliffhanger ending that will not be resolved in this issue. Does this mean that the Perforated Man's trips through time were illusionary? Does this mean that Booster did not serve out his 5-year prison term? These questions are not addressed in this issue.

Page 1, panel 4
Turns out that Booster still has Chronal Leprosy. Why in the previous issue did Chronal Leprosy caused Booster to bounce through time, but now it manifests as a fever? Were the trips through time only generated by the Perforated Man, not Booster's Chronal Leprosy? These questions are also not addressed in this issue.

Page 2, panel 1
Finally, Booster Gold meets the Legion of Super-Heroes in 30th-century Metropolis. Booster has met many of the Legionnaires over the years at varying points in Legion continuity. However, this is the first time that Booster has seen the Legion in action in their native time period. Pictured are Chameleon Boy, Cosmic Boy, Dawnstar, Karate Kid, Lightning Lad, Mon-El, Phantom Girl, Saturn Girl, Shrinking Violet, Star Boy, Sun Boy, Timber Wolf, Ultra Boy, and Wildfire. Judging by the outdated costumes, this battle against Validus is not taking place in the "present day" of Legion of Super-Heroes continuity.

Page 4, panel 2
Alas, there appear to be two unintentional errors in this panel by the colorist (and possibly letterer). Validus' word balloon has been mis-colored and is very hard to read. And Shrinking Violet's costume has been miscolored. (Thanks to Michael Foster for identifying Shrinking Violet for Boosterrific.com despite the color error.)

Page 6, panel 4
How exactly did Mon-El think that flying into the back of Validus' head would help stop him from falling?

Page 6, panel 5
The Legion of Substitute Heroes is a group of heroes who were denied membership in the Legion of Super-Heroes but have determined to prove themselves as a team. Mon-El is essentially accusing Booster Gold of being unfit for Legion membership.

Page 7, panel 2
Ultra Boy has many of the powers of Superman, but can only use one at a time. Right now Ultra Boy using the power of flight (he clearly is not wearing a Legion Flight Ring), so his logic is understandably less than super.

Page 10, panel 3
HIS STORY: The continuity of the Legion of Super-Heroes is a little confusing. Although Booster Gold originally stole and then was given Brainiac 5's Flight Ring and force field belt (and met Chameleon Boy and Ultra Boy as detailed in Booster Gold, volume 1, issues #8 and #9), that doesn't mean that this is the same Brainiac. While it is also possible that those events are still in this Brainiac's future, it is more likely that the Brainiac 5 appearing in the aforementioned issues of Booster Gold are from an alternate continuity. Booster Gold was the first DC character to appear in the Post-Crisis on Infinite Earths Universe, and current Legion of Super-Heroes chronology is based on the Pre-Crisis on Infinite Earths Multiverse.

Page 11, panel 3
Booster Gold is being interrogated by Proty, Chameleon Boy's pet. Since Booster has asked for Brainiac 5, it seems that Booster remembers his earlier encounters with Brainiac 5 and knows that he possessed Brainiac's Flight Ring and force field belt.

Page 14, panel 4
All records of Booster Gold will stop? Well, we already know Booster Gold dies (as seen in 52 Week 15), but this is probably more foreshadowing of Booster's eventual transformation into Rip Hunter's Mentor (as seen in the Time Masters: Vanishing Point mini-series).

Page 15, panel 3
HIS STORY: Dr. Tsuris is a member of the Metropolis University Time Institute. At some other point in the chronology/quantum existence of the Legion of Super-Heroes, the Chronarch of the Time Institute (Circadia Senius) will send Brainiac 5 back in time to discover why Booster Gold has his Flight Ring and force field belt (as seen in the previously mentioned Booster Gold, Volume 1, #8). This is Booster's first visit to the Time Institute.

Page 17, panel 4
FASHION ALERT: Thanks to his brush with Chronal Leprosy, Booster Gold is now functionally immortal. And thus the question of Booster Gold's age is made immaterial. Also note that Booster puts his force field belt on under his shirt. Twenty-fifth-century technology is something else, indeed, if this belt is never visible under Booster's costume!

Page 18, panel 5
It is the research of Rip Hunter that provides the foundation for the Time Institute in the first place.

Page 19, panel 1
Translated from Interlac, the univeral language of the United Planets in the 30th century, this sign reads "sunflgwer." The similar sign seen two panels later translates more appropriately to "sunflowe[r]." (This discrepancy is assumed to be an editorial error.) This is clearly the equivalent of a SunDollers Coffee house in 30th-century Metropolis, a reference to a subplot in Booster Gold, Volume 2, #40.

Page 19, panel 6
There is a sign on the wall for a very familiar missing girl. (The Interlac translates to "missing" and is signed "sp," the initials of the 30th-century Science Police.) This places the time as very near Booster's last trip to the 31st-century, not the 30th-century as Booster previously assumed. (Specifically, Booster visited April 8, 3082, in Booster Gold, Volume 2, #32.)

Page 20, panel 5
In the midst of an argument with Rip Hunter in the 21st-century Arizona Time Lab, Booster Gold confirms that he is still licensing his adventures to comic book companies. Writers Keith Giffen and J.M. DeMatteis take a moment to poke fun at themselves as Booster exclaims, "since they switched writers the book's gone right into the toilet!" Considering the sophomoric humor of recent Giffen-and-DeMatteis-penned issues, this is a very apt description indeed.

Boosterrific Review: A very disappointing issue that doesn't make any sense either internally or in connection with previous issues. There had been hints from issue writer J.M. DeMatteis that DC Editorial denied the original ending to this story, so perhaps the fact that it makes no sense is a side-effect of that mandate. However, this issue is hardly the best work of artist team Batista/Perrotta or even colorist Hi-Fi Designs. Lackluster all the way around.

(2 votes)
KMD (Apr. 17, 2011, 07:47:21)
Good riddance to bad rubbish on the JMD/KG team. This issue was weak and a bit rushed that did little to clear things up or advance the plot or develop the characters.
Harry (Apr. 15, 2011, 10:21:44)
Not a top gear effort likely to due to the apparently rushed effort to end the KG/JMD run. I enjoyed the character interactions (specifically BG and Brainy 5). I also like unexplainable time paradoxes... those are worth at least an extra star in my book. :-)