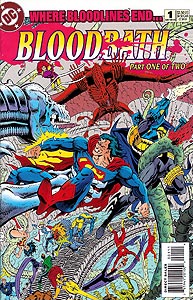 Brief Synopsis: Amanda Waller assembles many of the heroes of the DC universe in order to repel an assault on humanity by a dragon-like race of shape-changing aliens.

Issue Notes: This is the penultimate story in the summer-long "Bloodlines" storyline running throughout the 1993 DC annuals.

Page 6, panel 1
Booster Gold assembles to discuss strategy against the alien menace with the following identifiable heroes: Atom II, Batman II, Battalion, Bloodwynd I, Changeling, Deathstroke, Dr. Light IV, Elongated Man, Etrigan, Green Lantern II, Guy Gardner, Hawkman III, Martian Manhunter, Maxima, Nightrider, Nightwing, Pantha, Power Girl, Ray II, Red Star, Redwing, Roy Harper (as Arsenal), Superboy III, Superman, Tasmanian Devil, Terra II, and Wonder Woman. This is Booster's first appearance with so many heroes in his new armor, and it is his first meeting with Arsenal, Batman II, Battalion, Nightrider, Superboy III, and Terra II. Etrigan the Demon previously appeared at the JLA Headquarters in Justice League America #70, though it is unclear if Booster met him at that time. Note that Superman is present, having returned from the dead less than a year after being killed by Doomsday.

Page 12, panel 4
Booster accompanies fellow Justice Leaguers Bloodwynd I, Guy Gardner, Martian Manhunter, Maxima, and Wonder Woman to the rescue of Ray and a LexAir passenger airliner that has been assaulted by the alien named Glonth. 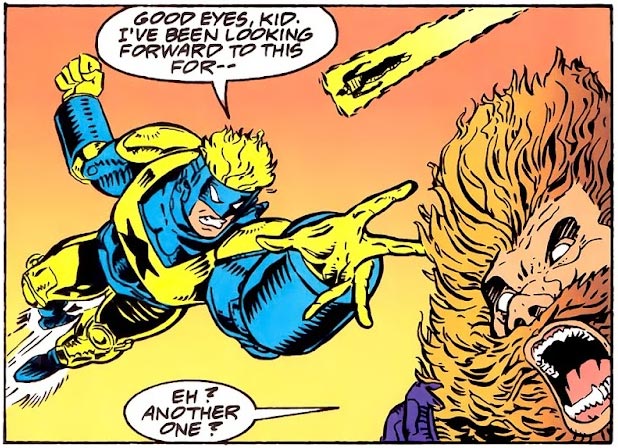 Page 13, panel 3
DON'T MAKE 'EM LIKE THEY USED TO: As the others deal with saving the airliner, Booster charges the falling Glonth, only to fall to the alien's superior strength. Mark II Booster Gold 0, Enemies 5. These panels are the first to indicate that Booster's current flight ability may indeed be powered by his new armor's boots and not his Legion Flight Ring.

Page 24, panel 2
Amanda Waller divides the heroes into smaller teams to assault the alien stronghold near the old Reservoir Road in Metropolis. Booster Gold is assigned to the "Wave Two" team with Arsenal, Maxima, Pantha, Red Star, and Terra.

Page 29, panel 5
Wave Two is the first group to encounter the alien Venev within its stronghold. Despite Booster's best efforts, Venev escapes.

Page 54, panel 2
Though Booster is not specifically shown to be captured by the Taker, he is not pictured among "all that's left," the few heroes who escaped the Taker's initial assault. Booster's fate will not be revealed until the next issue.

Boosterrific Review: Breaking the tradition of the company-wide crossover story, the Bloobath mini-series does not bookend the 1993 DC Comics Annuals but rather concludes them. This strategy makes for a more cohesive mini-series. As uniquely 90's as this series is (edgy heroes, erratic art, long-haired Superman, "blood" in the title), it is not at all bad. The story is a straight-forward brawl featuring many popular heroes of the contemporary DC Universe. Aside from the terribly uneven art (especially the careless coloring by Stuart Chaifetz), this issue remains a surprisingly readable comic book.