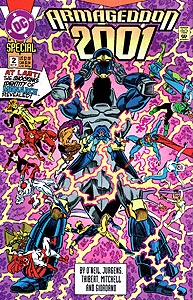 Brief Synopsis: Figuring Captain Atom to be Monarch, Waverider accidentally inspires Captain Atom to release Monarch from the Quantum Field within which he was trapped. The assembled heroes of the DC Universe must now combine their powers to repulse the invader.

Issue Notes: The story in this issue concludes the summer-long "Armageddon 2001" storyline running throughout the 1991 DC annuals.

Page 46, panel 5
Just as Matthew Ryder "remembered" in Armageddon 2001 #1, Booster Gold appears among the heroes that have assembled in Metropolis to fight a villain. However that villain is not Darkseid but Monarch. Other heroes in the panel are, from left to right, Blue Beetle II, Starman V, Captain Atom, Power Girl, Flash III, Orion, Waverider, Superman, Green Lantern II, Geo-Force, Batman, and Aquaman. Other heroes shown to have assembled for the fight against Monarch include Blue Devil, Fire, Gangbuster, Guardian, Guy Gardner, Ice, Jade, Kilowog, Lightray, Martian Manhunter, Nuklon, Robin III, Rocket Red #4, Speedy, and Valor. This is Booster's first meeting with Gangbuster, Orion, Lightray, Robin, and Valor

Page 55, panel 3
SPOILER WARNING!: This series deals with the possibility of time travel in a much different manner than was considered in the original Booster Gold series. Waverider travels from a future specifically to prevent its occurrence. According to the philosophy spouted by Skeets in Booster Gold #6, this should be impossible. As Waverider conducted his investigations, he found that his mere presence was possibly changing the future. At the conclusion of this series, Waverider manages to save a younger version of himself, and it is presumed that the future from which Waverider arrives has been averted. (Especially since it will be revealed later that an alternate version of Waverider's alter ego, Matthew Ryder, is the leader of the Linear Men.) If the future is predetermined, as it appears to be for Booster Gold, Waverider has created a time paradox loop by saving himself, and Monarch has created a time paradox loop by creating himself. Reveal

Boosterrific Review: No doubt this is one of the more controversial books ever published by DC Comics, as a leak of the story's ending caused a last-minute change in the details that really do not make any coherent sense. So while the finished product is a typical super-powered brawl between clearly defined groups of good and evil, the distracting failure to tell a complete story prevents this issue from ever being anything greater than mediocre.