Boosterrific.com
>
Comics
>
The Adventures of Superman #488

The Adventures of Superman

Brief Synopsis: Superman leads a strike squad of super-heroes into space against Warworld while Batman leads heroes on Earth against Brainiac's army. 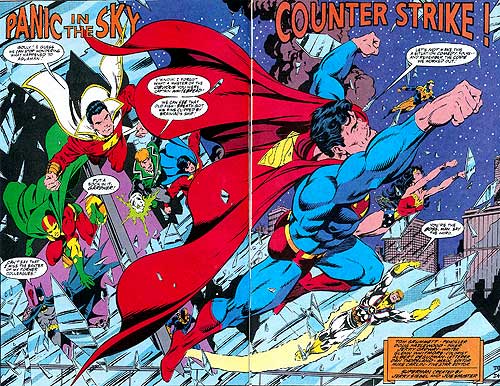 Page 4, panel 5
While the other heroes were attacking the main hull of the ship, Booster attempts to free Aquaman from the Headship's tentacles. Before Booster can reach Aquaman, Brainiac teleports Aquaman away. Superman reveals to Booster that Briainac is telepathically linked to his Head-ship and can read the heroes' minds.

Page 5, panel 1
Booster calls Superman "Chief" and promises, "to try and keep my mind blank from here on in!" No doubt based on past interactions between the two, Superman doesn't think that this will be a problem for Booster.

Page 17, panel 4
While Superman fights Draaga, Maxima, and a mind-controlled Supergirl II, Booster joins Captain Marvel, Rocket Red #4, Wonder Woman, and Dr. Fate in an assault on Warworld with other heroes. When the heroes divide into separate teams to infiltrate Warworld, it is unclear which team includes Booster. Booster is not seen again for the rest of the issue.

Boosterrific Review: Superman leads a hand-picked team of heroes against Brainiac. The issue suffers from some painfully stiff dialogue and some pointless, but is still a fine read.