Trading on His Reputation

Cryptozoic Entertainment released their DC Comics Justice League trading card set months ago, and somehow I've failed to mention it here despite the fact that there is a Booster Gold card.

Maybe I've failed to mention it because it features Booster's New 52 costume. But the artwork by Alejandro Germánico Benit is too good to ignore. It looks great, especially when the cards are assembled into the nine-slice collages, like this one of the short-lived New 52 era Justice League International.

Booster Gold is card #61 in the base set of 63, which means you have pretty good odds of getting one if you buy a box at your Local Comic Shop or wherever fine trading cards are sold.

(I owe a thanks to dcinthe80s.com, whose recent review of Batman trading cards reminded me to post this.)

Back in 2011, Rachel E. Ordway reimagined the entire DC Universe as a friendlier, funner New 52. Among the redesigns were a female Blue and Gold.

Visit crackpotcomics.DeviantArt.com to see a much larger graphic with even more characters.

I usually save previews for Wednesdays, but I thought since we've been in a bit of a Booster Gold drought since Convergence, I'd go ahead and post a link to Uproxx.com's preview of this week's Bat-Mite #4. 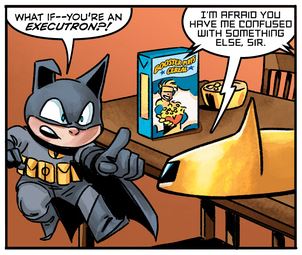 I'm sure it's not my imagination that Skeets is starting to look like a golden, robotic Batman. Though, to be fair, this is a "Batman Family" title. Loosely.

Bat-Mite #4 will be released this Wednesday.

The Son He Never Had

Newsarama.com got the first look at the upcoming Convergence: Booster Gold #1. And the revelations just keep coming. 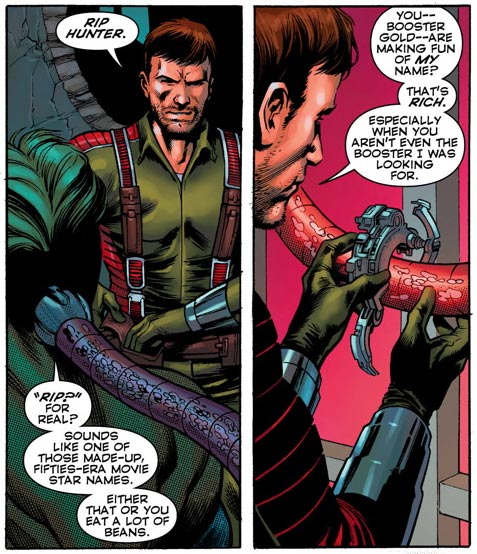 New 52 has no idea who Rip Hunter is. That seems to make it pretty clear that there are no Time Masters in the New 52 continuity. One more reason to hope it doesn't survive Convergence.

What else will we see when we get our hands on the full issue of Convergence: Booster Gold #1 this Wednesday? I'm pulling for a meeting between New 52 Skeets and post-52 Skeets. (IhopeIhopeIhope!)

Brady Kj posted on Apr. 27, 2015 at 9:16 PM
I have a friend who hoped beyond all hope that the New 52 Skeets, instead of being a robot, was Ted Kord, and he serves a role very similar to Oracle. It's kind of a long shot. She wanted it because it would combine the three characters she misses the most into one awesome character.

I'm no fan of the New 52 Booster Gold costume. Too many pointless gold lines and ridiculous stylings. If you insist on adding lines to a costume, at least attempt to make them make sense. Maybe a little something like this: 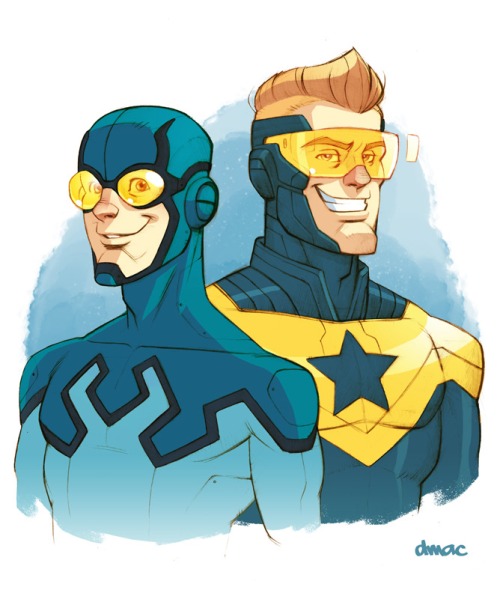 Artist Darren Calvert describes this piece as "Blue Beetle and Booster Gold drawn while watching TV last night." It's a great sketch. Must have been a pretty boring television show.

You can find more of Darren's work at DarrenCalvert.com and darrencalvert.tumblr.com.

Tinuvial posted on Jan. 20, 2015 at 12:47 PM
Booster looks like he either has a bit of a Mohawk going or he used a lot of hair gel to make his hair stand up like that. Now we just need a slightly futuristic Skeets to make the picture complete.

Grimmy posted on Jan. 20, 2015 at 4:56 PM
Nice. Wish I could still split my attention like that. Ted looks a little too svelte (hey, everybody's a critic). I always liked the Smallville design. What did you use to color it?

Boosterrific [Official Comment] posted on Jan. 20, 2015 at 6:16 PM
You'd have to ask Darren Calvert what he used to color it. I just reposted it because it's awesome. (I love that Booster Gold has never been one to shy away from trying new hairstyles. I mean, seriously, Superman has been seeing the same barber for 77 years.) I'd suspect it's colored in Photoshop. Who draws on paper anymore?

Darren Calvert posted on Jan. 22, 2015 at 12:09 PM
Drawn in pencil (on paper) and then digitally colored in Photoshop. I was going for a bit of an Astroboy/Meet the Robinsons "future pompadour" thing with Booster's hair.

It always seemed kind of strange to me that Beetle was super buff in the comics but I guess most heroes tend to have pretty much the same build.