I support Booster Gold wherever he appears. I'm glad to see that most of you do, too.

Perhaps you noticed earlier this week when Entertainment Weekly broke the news that Booster Gold was getting his own Convergence crossover mini-series (penned by Dan Jurgens, as many expected). But did you see the cover? 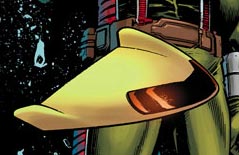 That's right, it's Skeets! Finally, Booster's robot sidekick makes it to the New 52. Like everyone else. Skeets also gets a New 52 makeover.

Tinuvial posted on Dec. 4, 2014 at 3:16 PM
You mean next year Booster gets more than 3 issues in an entire year? Sounds like in another couple years we might have worked up to, oh, say 10 issues a year.

Brady Kj posted on Dec. 5, 2014 at 9:49 PM
I second Grimmy's sentiments. I'm just glad he's back, but I'd be gladder if he were a flying football and not a paper airplane. However, MetalWoman has a point. I'd be a little irate if Skeets looked like he belonged in the DCNu.

mesqueda posted on Dec. 7, 2014 at 3:22 AM
The image showing rip hunter got me like woaaaaah it's about to go down

If you don't say anything else about Brett Booth, you have to admit he draws a pretty enthusiastic good Booster Gold. 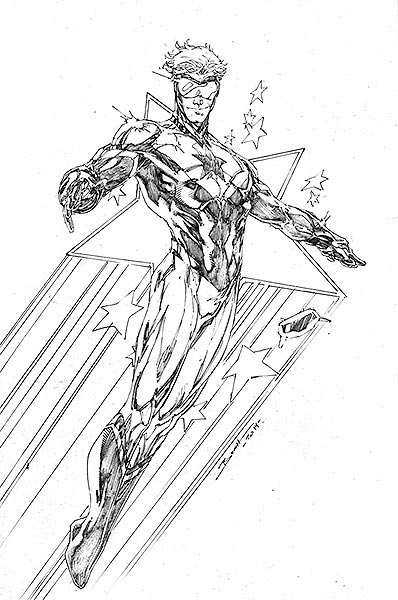 Click on the image above to go to Booth's website, demonpuppy.blogspot.com, where Booth posts a new sketch each Saturday.

To be clear, The Firestorm Protocols collects issues #7 through #12 and #0 of the series and contains none of Dan Jurgens' work on the title. This volume represents the second half of Ethan Van Sciver's year on the series. Van Sciver's art was well received, but his story not so much.

Come to think of it, it has been about a year since these issues were published, and already Jurgens' New 52 reinterpretation of the JLI and Van Sciver's New 52 reinterpretation Firestorm have already been largely forgotten. Firestorm looks and acts much like his pre-Flashpoint self as a member of the Justice League, and Booster is rumored to be returning to his own title again.

It's beginning to feel like old times again at DC!

Speaking of images that have fallen through the cracks, Brett Booth posted this sketch of Booster Gold last April, and I'm just now getting around to showcasing it! 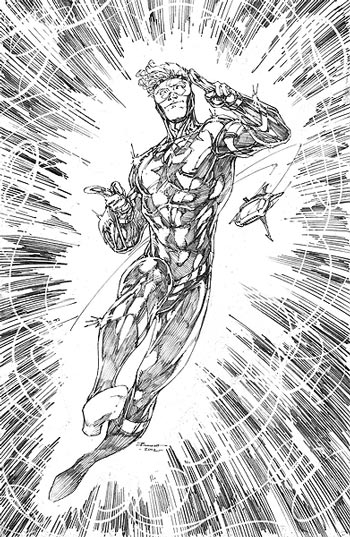 It looks great. Sorry for not getting to it sooner, Brett.

Click on the image above to travel to Booth's website, demonpuppy.blogspot.com, where you will find a much larger and better version of Booth's sketch.

MetalWoman posted on Jun. 5, 2013 at 8:30 AM
I hope the new Booster Gold comic is drawn by Brett Booth. This style has an innocent enthusiasm that would fit Booster perfectly.

Today marks the 72nd week since DC debuted the New 52, and it has less redeemable value than ever.

I've tried to make myself like it, really I have. When that failed, I tried hard to tolerate its presence. But there's simply no denying that there's simply nothing in the New 52 for me, as proven again by this week's April solicitations.

There isn't any sign that Booster Gold will be seen anywhere before May at the earliest. That'll be 8 months and counting between Booster appearances, which will be a record for the longest drought between appearances in the nearly three decade history of the character.

DC claims to be "moving forward" with the New 52, but charging $8 for Detective Comics #19 because it would have been a milestone issue if it hadn't been renumbered in 2011 seems to seriously belie that point. I'm sorry, DC, but you can't price gouge for the sake of nostalgia and call it the future and expect anyone to celebrate.

Conventional wisdom says that it takes a month of changed behavior to break a habit. If there is any truth in that, I guess Booster Gold fans are done with buying comic books. Thanks for nothing, DC!

Boosterrific [Official Comment] posted on Jan. 16, 2013 at 3:20 PM
Sorry, Gio, but while that maybe new to your LCS, the book has been available for quite awhile. I covered it here on the Boosterrific Blog on September 5, 2012. Check out the comments section of that post and you'll see even the writer dropped in to say hi.

DC UNIVERSE PRESENTS #19
" In this final issue, what time displaced-hero has arrived on our world and is the destruction he brings the herald to a great disaster?"

Boosterrific [Official Comment] posted on Jan. 22, 2013 at 4:16 PM
DC sure has gotten your hopes up about DC UNIVERSE PRESENTS 19, haven't they, Booster Nation. We have discussed this in the Boosterrific Forum (http://www.boosterrific.com/forum/viewtopic.php?f=2&t=246 and decided that it is not Booster. But clearly, I need to make this a blog post so that those of you who don't visit the forum can see our debate. More on this tomorrow.