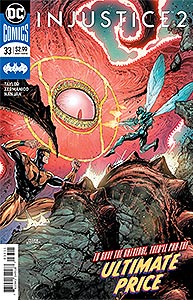 Issue Notes: This book was first released online at Comixology.com in two installments (Chapter 65, "Brainiac" and Chapter 66 "Last Stop") for 99¢ each. This print edition has a cover price of $2.99.

Page 11, panel 4
This expository discussion between Booster Gold and Blue Beetle establishes what these two characters are doing in this comic and back in the day would have been followed by an editorial dialogue box saying something like "as seen in issue #30 — ed." 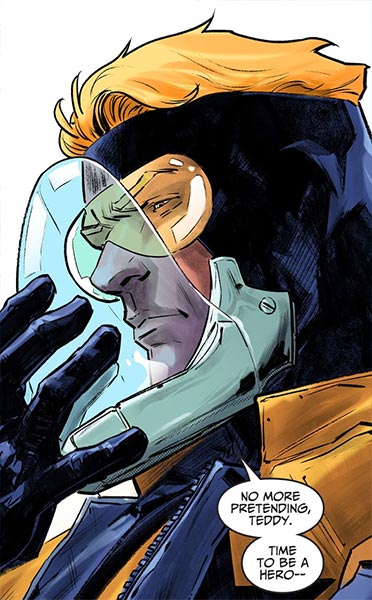 Page 16, panel 6
After Jamie Reyes sacrifices the Blue Beetle scarab to defeat Starro, Booster Gold gives Jaime his oxygen mask. It is a heroic gesture, though it's hard to fathom why anyone with the technology to travel through space and the ability to foresee the future wouldn't carry a backup oxygen source.

Page 17, panel 6
SOLIDIFIED TIME: Having ordered Skeets to take Jaime "out of here," Booster drifts through space to die alone...

Page 19, panel 3
SPOILER WARNING!: ...when Ted Kord arrives (via time travel with an alternate Booster Gold of the future!) to be with his friend "at the end." This reciprocates Booster's presence at the moment of Ted's death in issue #5. Reveal