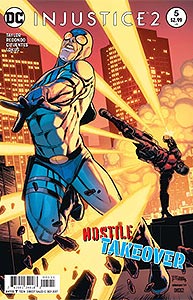 Issue Notes: This book was originally released online at Comixology.com in two installments (#9-10) for 99¢ each. This print edition has a cover price of $2.99. For the additional $1.01, the purchase of the print copy also receives the DC Comics All Access page and 11 pages of ads.

Page 3, panel 1
ALTERNATE REALITY: Skeets is seen accompanying former Blue Beetle Ted Kord and current Blue Beetle Jaime Reyes. These events of this issue take place after the conclusion of the Injustice video game but prior to the events of its sequel, Injustice 2.

Page 5, panel 4
Booster Gold and Blue Beetle appear together in a portrait in Ted Kord's office. Their playful pose recalls their misadventures in the Justice League International comics of the 1980s...

Page 6, panel 1
...a lighter, more humorous time for everyone but Batman. (He didn't smile then, either.) 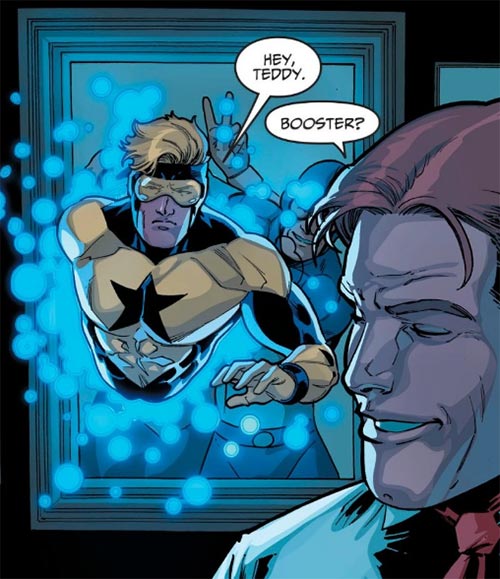 Page 7, panel 1
Booster Gold arrives from the future (by way of his own portrait) to say good-bye to his old friend. This is the first appearance of Booster in the Injustice Universe.

Page 8, panel 3
SOLIDIFIED TIME: Booster indicates that he "can't change the past," though he tried anyway. That's friendship.

Page 8, panel 4
Booster also says he "got put away" for trying to change history. This implies that the Injustice Universe has time police similar to those seen in Booster Gold volume 2, #41.

Page 20, panel 8
SPOILER WARNING!: True to his promise, Booster is there at the end for his friend. Reveal