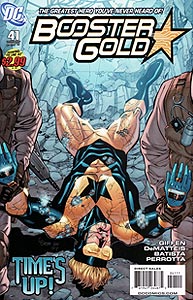 Cover Description: Battle-damaged Booster Gold is dragged on his back by two armed men.

Issue Notes: Despite no change in the price from the previous issue, the cover promotes DC's "Drawing the Line at $2.99" slogan.

Page 1, panel 1
Events in this issue begin in Rip Hunter's Arizona Time Lab moments after the conclusion of the previous issue. Rip Hunter has tazered Booster Gold in order to prevent him from fleeing Rip's decision that Booster should return to his native time and face legal judgement for the crime of stealing from the Space Museum (as originally detailed in Booster Gold, Volume 1, #6). Michelle Carter, Rani, and Skeets join Booster and Hunter for their discussion.

Page 2, panel 1
He may have a point, Michelle, but it's not a very good one. Where in time could Booster Gold possibly go that Rip Hunter, the Time Master, couldn't find him?

Page 2, panel 4
Rip Hunter says that he and Booster Gold have worked together for "these past months." Not counting their time together in the year-long storyline in 52, Booster joined Rip in Booster Gold, Volume 2, #1, 42 months (3-1/2 years) ago.

Page 2, panel 6
Rip Hunter doesn't know who Ward Cleaver is? Ward Cleaver, played by Hugh Beaumont, was the father of the oft-troubled Beaver in the enduring television sitcom Leave it to Beaver. This exchange is somewhat ironic, as Booster has no idea that he is destined to be Rip Hunter's father.

Page 5, panel 1
Rani was rescued from the destruction of the planet Daxam by Booster Gold in Booster Gold #32.

Page 5, panel 3
Actually, Rani, Booster Gold's faith is a bit of a question. It's hard to believe that any hero in the DC Universe could be an atheist after angels have earned Justice League membership and devils have bargained for the souls of heroes and villains alike. Booster has frequently invoked the name of "God" in his adventures, but he has never been seen attending any organized religious worship service and once claimed to be an atheist. (Although he also once claimed to be married to a woman named Gladys as part of an extended practical joke.)

Page 6, panel 1
Speaking of "crappy security," Rip Hunter's lab in recent months has been invaded by Black Beetle (in Booster Gold #5), Chronos (in Booster Gold #13), the Time Stealers (in Time Masters: Vanishing Point #1), and now a time-displaced Nazi. That's not a very sterling track record for the the headquarters of someone who claims to have changed his own name to hide from the wrath of his many, many enemies.

Page 7, panel 5
"Feuerball" translates from German as "fireball." Dr. Nishtikeit is referring to a rumored (but unproven) secret weapon of the German military designed to distract enemy aircraft that may have been the basis for mid-20th century UFO sightings.

Page 9, panel 1
Michelle has diagnosed Rani as suffering from a Post Traumatic Stress Disorder (PTSD) loop. Stress-induced flashback episodes can force the PTSD sufferer to relive the traumatic events that triggered the condition over and over. PTSD is not uncommon in people who have survived traumatic events, including natural disasters and the unnatural destruction of entire planets.

Page 9, panel 5
SPOILER WARNING!: Booster is concerned that Skeets has been severely damaged in Nishtikeit's surprise attack, but he probably needn't be. Skeets has been repaired following several prior catastrophes, and Rip Hunter has previously admitted to backing-up Skeet's artificial intelligence. Reveal

Page 11, panel 3
Franz Leibkind is the unrepentant Nazi author of "Springtime for Hitler," the play designed to fail in Mel Brook's The Producers. Note that the name is misspelled in this issue.

Page 14, panel 5
Angered and wounded by Dr. Nishtikeit's surprise stabbing, Booster wishes that Nishtikeit would go "down to Argentina." The government of Argentina was very accommodating to former Nazi officials who fled persecution following their actions in World War II.

Page 15, panel 5
POWER UP: Much like Booster keeps spare copies of his Mark I.v2 power suit on hand, Skeets keeps a closet of spare hulls should he ever become damaged.

Page 16, panel 1
Isn't it good to know that Michelle yells at everyone and not just Booster? These days she might be a shrew, but at least she's an equal opportunity shrew.

Page 16, panel 2
Skeets references Kooey-Kooey-Kooey, a Pacific island where Booster and Blue Beetle once established a casino and resort with funds embezzled from the United Nations in Justice League America #34. Some might argue that stealing from the U.N. is a far worse crime than stealing some unused artifacts from a museum.

Page 17, panel 1
SPOILER WARNING!: Following his trial in a 25th-century court, Booster is assigned to a five year sentence in a maximum security prison; Booster will be 40 years old before he is released from prison. This trial may appear to violate Booster's United States Constitutionally-granted rights against double jeopardy, but although Booster Gold has been arrested for his thefts (as seen in Booster Gold, Volume 1, #14), he has never been on trial for them. According to 25th-century federal agent Broderick in that issue, "crimes involving time travel are federal violations punishable by executions without trial!" Booster escaped from that execution with the help of his sister, who Rip Hunter is apparently not so eager to bring to prosecution. It must be assumed that Booster's trial takes place following Booster's previous escape from justice, otherwise Broderick would not have been so eager to execute Booster Gold after he had served time for his crimes.

Since Booster's execution was originally scheduled for late December 2462, this trial likely takes place in 2463 or later.

Boosterrific Review: Something about this issue feels classic, like the stories of the late Bronze Age of comics. Maybe it's the Nazis or the prison. Maybe it's the imminent threat of death or the appreciation for family. Or maybe it's the collision of continuity and storytelling. Whatever the case, Giffen and DeMatteis continue to gain traction in an enjoyable issue.

(2 votes)
KMD (Mar. 17, 2011, 14:52:25)
It was an ok issue but nothing really stood out for me. While not bad, there was little in here that seemed memorable.
Harry (Mar. 2, 2011, 10:11:11)
It is an ok issue. If you can set aside what feels like gross mischaracterization of supporting cast and blatant incongruity with established Booster lore, then it becomes a smash'em up with a neat villain and interesting plot development for the main character.