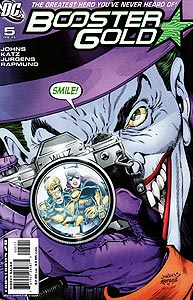 Cover Description: Booster Gold and Batgirl are reflected in the lens of the Joker's camera. The cover of this issue is intentionally evocative of Brian Bolland's cover to Batman: The Killing Joke.

Brief Synopsis: Booster Gold struggles to save Batgirl from the Joker.

Issue Notes: According to the cover, this issue was published the same week as Countdown #20.

Page 4, panel 1
SCHOOL'S IN: Booster Gold, Rip Hunter, and Skeets II discuss their situation as time police in Rip Hunter's Time Lab. Rex Hunter slouches in the background. Just as in previous visits to Hunter's lab, the chalkboards are covered in scribbles related to stories unfolding elsewhere throughout the DC Universe. 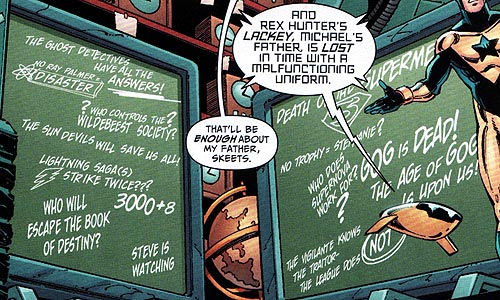 Page 6, panel 1
Booster Gold and Skeets arrive in the Joker's headquarters hidden within an abandoned Gotham City carnival. Booster plans to find the Joker and prevent him from shooting Barbara Gordon, robbing her of the use of her legs and unintentionally forcing her retirement as Batgirl. The Joker's actions are depicted in Batman: The Killing Joke.

Page 7, panel 5
FASHION ALERT: Mere moments after arriving at the carnival, Booster finds his costume destroyed at the hands of the Joker's freak show henchmen. Booster, if a bunch of midgets in bondage gear can destroy your power-suit so easily, perhaps it's time for an upgrade.

Page 11, panel 3
The true time-manipulating foes of Booster Gold and Rip Hunter are finally revealed, having traveled through time to dispatch one of their own failed lackeys as an infant. Why they don't take this action against Booster Gold, who has foiled all of their plans up to this point, is unclear.

Page 14, panel 6
SPOILER WARNING!: Booster Gold arrives at the home of Commissioner Jim Gordon too late to prevent the Joker's plans. After a brief but violent struggle in which the Joker gains the upper hand by using his camera's flash to blind Booster Gold and using Skeets as a bludgeoning device, Booster returns to Hunter's lab in failure. Determined to succeed, Booster insists that Hunter send him back again... Reveal

Page 18, panel 1
SPOILER WARNING!: ...only to fail again. Determined to succeed, he insists that Hunter send him back again... Reveal

Page 18, panel 3
SPOILER WARNING!: ...only to fail again. Determined to succeed, he insists that Hunter send him back again... Reveal

Page 19, panel 2
FASHION ALERT: Booster stands before a glass enclosure holding a copy of his uniform. Considering that the Joker and his henchmen have just easily destroyed his power-suit, it's good to know that Hunter keeps spares in his lab in addition to the ones Booster keeps in his closet (as revealed in the previous issue).

Page 19, panel 3
Hunter explains to Booster that he was only trying to teach him the lesson about "solidified time," time events that are unalterable. Hunter explains that Ted Kord's death is another solidified time event, and that Booster's attempts to save Ted Kord are impossible. Understandably, Booster does not take this lesson well.

Page 22, panel 1
Booster Gold is confronted by Blue Beetle I (Dan Garrett), Blue Beetle III (Jaime Reyes), and a mysterious fourth Blue Beetle. The gathered Beetles have assembled to travel through time and save Ted Kord from his death at the hands of Maxwell Lord, and are determined to proceed, despite Rip Hunter's insistence that the task is impossible.

Boosterrific Review: This issue is brutal. Alan Moore’s 1989 Batman: The Killing Joke, the setting of the events of this story, is a dark exploration of the interaction between the Dark Knight and his greatest foe. That is a fitting backdrop for this issue explaining the modern rules of "solidified time" travel in the new DC Multiverse. It simultaneously showcases the oft-hidden heroism of the series star, Booster Gold. If you can stomach the violence and trauma of watching one of the DC Universe's most tragic moments replay itself over and over, you'll find that this is the best issue of this series so far.

(3 votes)
Grimmy (Apr. 26, 2012, 06:16:34)
A PERFECT issue, I need more stars for this rating. The series now moves from key developmental events to pivotal tragic ones. This story shows that no matter what, some events can't be changed without dire consequences. Without Barbara Gordon being Oracle, the DCU would spiral into chaos... Lets hope Booster has learned that lesson.
BoosterPowershot (Oct. 5, 2010, 01:36:19)
REAL good issue, and up until the recent issue of Brave and the Bold, one of the more sentimental reads pertaining to Barbara Gordon's predicament, but also Booster's own personal feelings.
KMD (Dec. 1, 2009, 20:08:46)
A powerful issue-both in terms of plot and character development.