Get On the Booster Bus

One of the good thing about having no comic books is that I have more time to watch cartoons. And, as Booster booster Ithildyn has recently brought to my attention, Booster Gold has been making cameo appearances in recent episodes of the online DC Super Hero Girls shorts.

He's on the side of the bus at the 34 second mark in #TheCommute. 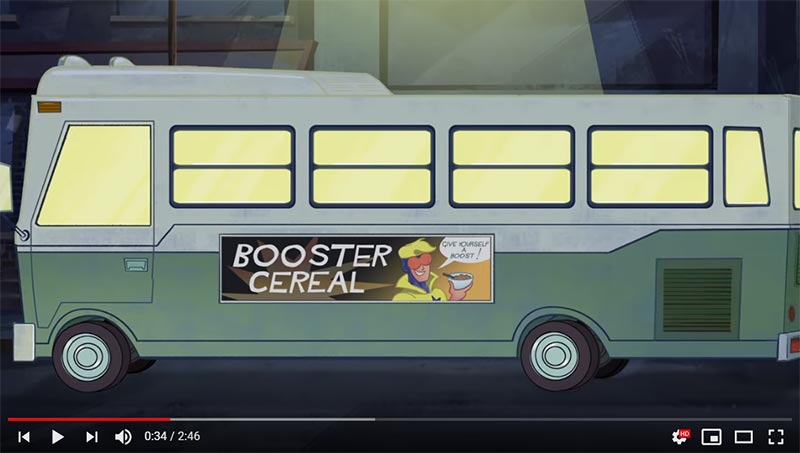 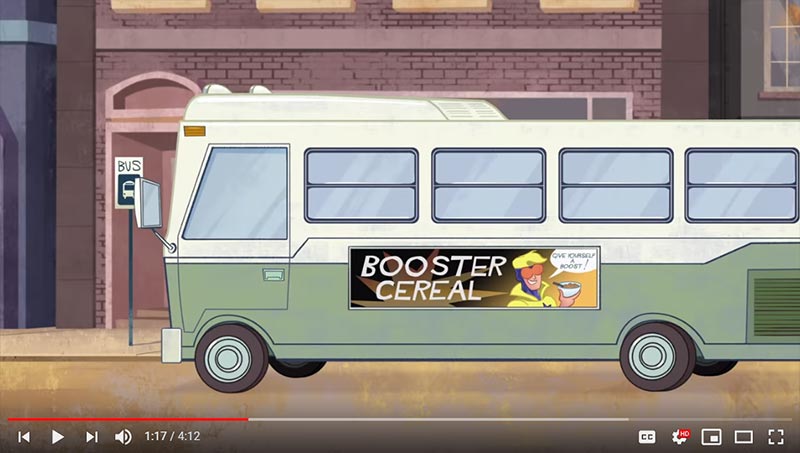 "Give Yourself A Boost" with Booster Cereal? That's a product we've not seen before. Just how many cereals are you going to endorse, buddy? You're giving Cap'n Crunch a run for his money.

Both videos are available to watch via YouTube.com. (#TheCommute, #ShellShock).

Once More from the Top

CBR.com (yes, them again) alerts us that

"A new report suggests that a series based on Blue Beetle may be in development at HBO Max."

That has caused a lot of Internet DC and comics fan sites (you know the type) to speculate that Booster Gold must be appearing in this. Two things:

1) We don't even know if this rumor is true, and

While it would be nice to think that Blue and Gold will one day own the airwaves just as they own our hearts, there's no great reason to assume that Booster will have anything to do with a Jaime Reyes Blue Beetle project (which this undoubtedly is, assuming it really is in the works).

When DC wants us to know otherwise, they'll tell us.

The article is mostly about the CW's upcoming crossover event between its DC-themed television shows, but as originally published, it contained the following passage:

Clearly superproducer Greg Berlanti and writer Marc Guggenheim, teenagers at the time Crisis came out, cared about all this. Their Arrowverse now occupies a significant number of hours on the CW's program grid, pulling stories from all across DC spacetime. And like our own universe, the wider Berlantiverse is expanding. Titans and Doom Patrol are on the streaming service DC Universe—based on DC books but, confusingly, outside Arrowverse continuity. Next year, TV will add Arrowverse shows with Superman, Stargirl, Booster Gold, and Green Lantern.

Did Wired break the news that Booster Gold is coming to the CW in 2020? Not so fast.

The article was later updated, changing the above to

Clearly superproducer Greg Berlanti and writer Marc Guggenheim, teenagers at the time Crisis came out, cared about all this. Their Arrowverse now occupies a significant number of hours on the CW’s program grid, pulling stories from all across DC spacetime. And like our own universe, the wider Berlantiverse is expanding. Titans and Doom Patrol are on the streaming service DC Universe—based on DC books but, confusingly, outside Arrowverse continuity. Next year, TV will add Berlanti shows with Superman, Stargirl, and Green Lantern.

Hmm. Look who's missing from that revision.

The footnote for the article says it was "Updated to clarify that not all the upcoming DC comics-based shows will necessarily be Arrowverse shows." Which obliquely avoids saying anything about why references to Booster Gold were dropped.

So, is a Booster Gold television show coming or not?

I asked around to see if I could confirm any of this (as it relates to Booster) and was told not to trust any of it. Therefore, let's pretend none of this happened and just keep hoping for progress on the Booster Gold The Movie coming to HBO Max rumor that I rumormongered last month.

Herb posted on Dec. 9, 2019 at 1:48 PM
Some of what I read is Booster Gold would be featured in the first season of the anthology show Strange Adventures

Boosterrific [Official Comment] posted on Dec. 9, 2019 at 3:26 PM
I have it on good authority that will NOT (capital letters intentional) be the case.

The Future of Television Is Maximum HBO

I'm never one to spread rumors, but ever since news broke that Greg Berlanti and Zack Stentz were working on a Booster Gold movie, rumor is about all we've had to talk about.

The skinny from David James of WeGotThisCovered.com is that

"[S]ome upcoming DCEU movies may skip theaters and premiere on HBO Max. The big name we're hearing is that Booster Gold could be the first feature film release for the service."

In case you hadn't already heard, Warner Bros will jump into the greedy proprietary streaming service game in May 2020. The service will stream content from across Warner Bros properties, both pre-existing and newly created. Berlanti has already announced two DC-themed shows.

As a result of that announcement, it seems a safe bet that the days are numbered for Warner Bros' existing DC Universe streaming service. We already know that at least some of its content (specifically Doom Patrol) will be moving to HBO Max. Therefore, if a Booster Gold movie is ever going to happen, it seems logical to assume that will be showing up at HBO Max, too.

Of course, that's all speculation. Like I said: rumors are about all we have to talk about when it comes to Booster Gold: The Movie.

The Future of Moving Pictures

Last weekend, CW president Mark Pedowitz spoke to reporters about his network's plans following the conclusion to Arrow at the end of the 2019-20 season, and he hinted that the replacement show is likely to also take place in the DC Comics-inspired "Arrowverse."

"There is another property we're looking at for the following season."

As you might expect, that vague tease has sent DC fandom into a bit of a tizzy as everyone developed their own pet theory for what he could have in mind and what they'd like to see. Sites like CinemaBlend.com and CBR have suggested a bunch of possibilities, from Nightwing to the JSA. One name that comes up pretty consistently is, as you might expect, Booster Gold.

Booster seems as good a guess as anything. Arrow executive producer/writer/director Greg Berlanti has tried in the past to get a Booster Gold project off the ground. Last we heard, Booster was still in the works as a movie project at Warner Bros, but who knows?

Maybe this is Booster's opportunity. Maybe it isn't. There are a bunch of deserving DC Comics properties that remain chronically underexposed to mainstream audiences. Who will the lucky winner be? Keep watching the CW to find out.

fabri24cr posted on Aug. 9, 2019 at 3:09 PM
Honestly I would rather not, I would love to see a Booster on a DC Universe show or a film, but as long is away from Berlanti, he and the CW made the Snyder films look like citizen Kane(and I don't even like Snyder), CWs show are so bad and nothing like the source material.

Diego Segovia posted on Aug. 11, 2019 at 5:18 AM
I'm hoping that a Booster Gold/Blue Beetle show for the DC Universe streaming app is Kevin Smith's secret project he's doing with Mark Bernardin, that they'll be announcing sometime this month. Nothing we can do but hope and wait.