Are you old enough to remember what it was like to have Booster Gold regularly appearing in his own comic book series? If so, you probably remember reading Booster Gold #28.

In that issue, the reader is treated to scenes that take place in

Not pictured is 2020, where we are now, exactly one decade since the release of that issue.

I didn't include it on my list of great Booster Gold comics, but in many ways, this is an ideal issue for any new fans interested in Booster's adventures and who are not yet indoctrinated into his (and DC's) history.

Everything is in here: Skeets, Rip Hunter, Michelle, Superman, the Justice League, time travel shenanigans, and of course, the Royal Flush Gang. 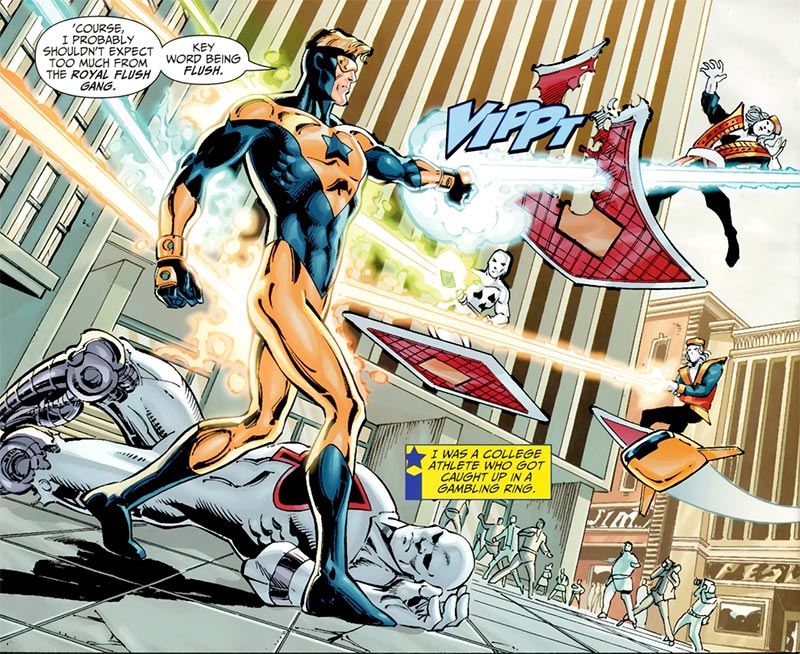 Booster will be back in the saddle again sooner or later. He could do much worse than the likes of Booster Gold #28.

Superman is to Brainiac as Booster Gold is to whom? If it's true that you can define a man by the quality of his enemies, Booster Gold must be a pretty great guy. He simply doesn't have that many enemies.

Royal Flush Gang, Black Beetle, mid-life crises — it's hard to believe that Booster Gold's stable of foes is so limited after 30 years of fighting crime. I asked character creator Dan Jurgens why none of Booster's early foes like Blackguard, Mindancer, Chiller, or Mister Twister ever returned to bedevil Booster Gold.

I think that has more to do with his book coming to an end than anything.

Look, villains rarely catch on the first time they appear. It often takes 3-plus appearances before they actually become a real part of a hero's rogues gallery. I think a couple of them had some potential. A couple others are obviously weak.

Had volume 1 run, say, 100 issues, they would have appeared again and been developed.

I believe Jurgens. In addition to Booster, Jurgens can lay claim to creating Cyborg Superman and Doomsday. The man knows a thing or two about creating memorable villains. He just needs a chance to attach one to Booster Gold.

Thank you, Dan Jurgens, for filling in the gaps in the history of Booster Gold.

Where Were You When You Met Booster Gold?

I had started collecting the retooled Justice League title in 1987 from the first issue of this new series. In the fourth issue, weasely businessman Maxwell Lord found his way into the JL's headquarters and immediately demands Booster Gold's inclusion on the team. Having no familiarity with the character whatsoever (this was long before the halcyon days of the Internet to look things up), I thought "who's this nerd"?

Eyz posted on Jun. 3, 2014 at 8:01 AM
I have to admit.. I first met him through Giffen and DeMatteis' JLI!
That's why that team, that run and those authors still have a very specially place in my heart~

But I quickly backtracked to Dan Jurgens' series, which I immediately fell in love with.

Such a fun character and concept...

I still think to this day's Booster's probably the last good "new" idea from DC. I mean, as far I go he's the last good viable "modern" DC character. I love Cass Cain Batgirl or Jaime Reyes Blue Beetle - but both a just retooling of existing IPs, if you know what I mean.

jared posted on Jun. 3, 2014 at 11:05 PM
First met booster as a 12 year old and watching his head get slammed in a car door by doomsday. I thought to myself...that guy is still alive. He is totally awesome. I wanted a character I could relate to, look up to. And I found t he at in gild and wear my booster gold fanclub shirt to this day

Brady posted on Jun. 6, 2014 at 9:22 PM
I learned of him as an adult, when I browsed DC's website and saw an ad for an issue of 52, featuring Booster Gold with a costume covered with ads. I decided I needed to read that series, because this is a cool dude. And I was right. I also took a liking to Renee Montoya, but she's barely even been mentioned after Countdown.