“The Tomorrow Memory: Part One” 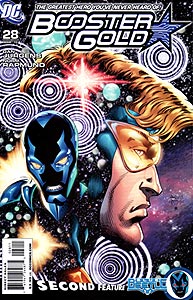 Brief Synopsis: Booster Gold balances his buffoonish public persona with his mission to save time from the interference of a mysterious agent.

Issue Notes: Despite Booster Gold and Blue Beetle appearing together on the issue's cover, they do not appear in the same story within the issue.

Page 5, panel 1
PESL SIGHTING: Booster Gold and Skeets battle the Royal Flush gang. Again. The exact location of this urban battle is unspecified, but the name "Jim Pesl" clearly appears in the marquees of several buildings in the background. In the past 5 months, "Pesl" has been seen on a candy dispenser, a tombstone, and now urban store fronts. As previously mentioned, Pesl is a college friend of inker Norm Rapmund, and Rapmund includes his friend's name in his inks occasionally.

Page 8, panel 4
PRODUCT PLACEMENT: With tongue placed firmly in cheek, Booster Gold directly references the long-defunct B.G.I. Headquarters (as the "Gold Mansion") and the Boostermobile. It's a wonder if any in his assembled audience remember his 1980s signature automobile produced by Brysler Motors (first seen in Booster Gold, Vol. 1, #5).

Page 14, panel 1
Booster Gold and Skeets arrive at the John F. Kennedy Space Center at Cape Canaveral, Florida, launch site of the NASA Space Shuttle since the early 1980s. Visible on the launch pad is the fictional shuttle Excalibur.

Page 15, panel 2
Rather than the Justice League International or original Justice League of America logos, Skeet's digital projection of Booster Gold's "card" shows the modern Justice League logo, used as the masthead of volume 2 of the series. This logo belies Booster's attempts to appear as his previous self, though no one expects the befuddled green-attired man (shuttle technician? NASA official? military security?) of being able to tell apart Justice League logos, as that is certainly not rocket science.

Page 16, panel 1
Booster Gold meets the crew of the ill-fated Excalibur, from left to right, Jim Garrison, Steven, Hank Henshaw, and Terri Henshaw. Chronologically, this is Henshaw's first appearance, though he was first published in 1990's The Adventures of Superman #465, written and drawn by none other than one Dan Jurgens. Henshaw will later become the villainous Cyborg during the "Reign of the Superman" storyline of 1993.

Page 17, panel 1
Booster comes face-to-mask with the mysterious agent of Project Slipstream who is attempting to sabotage the launch of the Excalibur.

Boosterrific Review: As effectively as Booster juggles his responsibilities, writer Dan Jurgens juggles two seemingly unrelated plots into a story as layered as a Russian nesting doll. Booster's paradox, saving the past to ensure that the future is damaged, is by now familiar to readers of the series. However, Jurgens teases that Booster's actions will have direct but unforeseen consequences for our hero. This dramatic irony is appealing in a series devoted primarily to toying with the artificial history of the DC Universe, and hopefully the suspense that it generates will eventually lead to an injection new life (first life?) into the character of Michelle Carter.

(2 votes)
Harry (Feb. 8, 2010, 17:49:59)
The story served it's purpose. I was entertained and interested to find out what happens next. The Blue Beetle story was more compressed than usual I thought. Loved the art, as always.
KMD (Jan. 18, 2010, 13:43:32)
Interesting but somewhat slow. It was fun to see Booster against the Royal Flush gang and the press event after. Michelle...the less said the better. They brought her into Booster's time and found she had no personality or purpose. Fine so they kill her off. They then bring her back and not much more luck. I hope they make a dramatic revelation about the character. The Project Slipstream line holds some potential. Nice to see Booster with Skeets again as opposed to splitting them up. A side note. Hey only two Blue Beetle cofeatures left till they pull it. I hope that's Ted Kord in the last panel but I think its Peacemaker.