Back in March, we took a look at the splash title page from Superman #9 and debated whether Booster Gold was in it. To refresh your memory, this is the page:

And this was where we thought Booster might be:

It turns out we were right. Morgenstern, who spotted Booster the first time around, has found proof in Joe Prado's text-free original inks of Ivan Reis' pencils on ComicArtFans.com. Taking a second look at where Booster Gold was thought to be hiding:

Now, as it happens, the scene seen in this splash page only occurs in Superman's imagination, so this qualifies as an out-of-continuity appearance (just like Booster's cameo in Batman: Last Knight on Earth #2 discussed earlier this month). No need to rush out and pick up this back issue unless you obsessively buy *all* Booster Gold comics.

Personally, I bought my copy back in March on the suspicion that this *might* be a Booster Gold appearance.

Keep up the good work, Morgenstern.

DC released solicitations for June last week, and I'm sorry to say that the only Booster Gold appearance looks to be in the Injustice 2 Volume 6 hardcover collection reprinting Injustice 2 issues 31 through 36. We'll have to hope that Booster is just taking a well earned vacation after the conclusion to Heroes in Crisis and isn't being incarcerated for murder.

It remains possible that Booster will be seen in Brian Michael Bendis' Event Leviathan. Solicitation text describes it as "a mystery thriller that stretches across the DC Universe and touches every character from Batman to Superman to the Question to Talia al Ghul." That's not much to go on, but no one can deny that Booster Gold is certainly a character.

Speaking of Booster ensemble appearances, longtime Booster booster Morgenstern thinks he has spotted our hero in another recent issue of Superman written by Bendis. See this title page from Superman #9:

That's a pretty crowded picture. Here, let me zoom in. 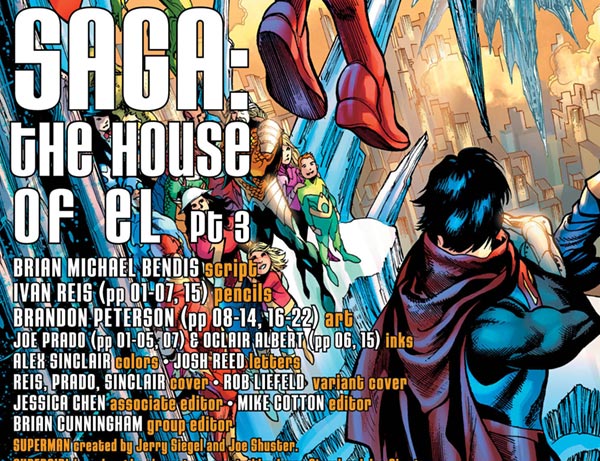 Spot him yet? No? Let's get closer still.

Says Morgenstern: "On the Lower left, hidden by the word "HOUSE", next to Ted Kord, is someone who might be Booster Gold."

Is it? Could be. Maybe. I think we can all agree on one thing: Morgenstern has some great eyes!

Thanks, M. Maybe if you take a look at the rest of those DC Comics solicitations at Newsarama.com you'll have better luck spotting Gold than I did.

Jesster posted on Mar. 20, 2019 at 4:23 PM
Animal Man, definitely Animal Man. I believe Zatanna has a restraining order against Booster.

Later that day, Morgenstern posted a link to the tweet in the Boosterrific Forum. Because it is likely that Jurgens was referring to Booster Gold, I retweeted the message via @boosterrific. That was the last I expected to hear about that, at least until we had some new information. (Does "BG" stand for what we want it to? Why be coy about it? Why is he drawing it?) I was wrong.

Late Thursday night, CBR.com reposted the tweet on their site. I assumed that was because they were more starved for content than usual. The post, by Jim Johnson, adds nothing to the tweet that isn't visible from the original post. However, within hours of that post, multiple people reached out to me to say, "Have you seen this on CBR.com?" Yes, I had.

Before I rant a bit — it's my website, and I'll rant if I want to! — let me say that I don't want to discourage anyone from sending me anything that they think is Boosterrific, I really don't. I want your input, and I will always try to be polite and thankful for anything you send me.

But paying so much attention to a teasing tweet not because Dan Jurgens posted it on Twitter but because CBR reposted it? Really? CBR? A once-great website of comics journalism that lobotomized itself in a bid to become the BuzzFeed of comics/movie/television entertainment? At least when Megan Peters covered the tweet for ComicBook.com, she added some context! But CBR? "Hey, look! A thing!" Grr!

I know that I shouldn't be irritated. It's no one's fault but mine that I underestimated how excited Booster Gold fans would be that Dan Jurgens might actually be drawing the character again no matter what the medium or purpose. I should have immediately posted Jurgens' tweet here in the Boosterrific Blog on Wednesday. And I certainly can't expect anyone else to share my biases against CBR. For all of those oversights and failures, I apologize. I'll try to do better in the future.

TLDR: For some reason, Dan Jurgens told the world he is drawing something that starts with the initials "BG," and I didn't tell you. But don't worry, CBR.com has you covered.

Now if you'll excuse me, I'll crawl back into my cave.

The real news comes from Jurgens himself. So, yes, this is speculation and all, but, it's still nice to know... :)

SuperPat posted on Feb. 13, 2017 at 1:23 PM
I suspect he's drawing BG for the variant cover for the Booster Gold/Flintstones Annual that's out in late March. Norm Rapmund also tweeted out a tiny snippet of the drawing, and they are both listed as the variant cover artists on DC's website. Still exciting!

Boosterrific [Official Comment] posted on Feb. 13, 2017 at 3:32 PM
Freytaw, I didn't post about it earlier because I didn't want to spread false hope or speculate wildly about what Jurgens was trying to tell us (like CBR did). See what happened to Ariel there? That's what I was trying to avoid: unjustified expectations meeting harsh reality.

The only reason I posted about it today was because of CBR's terrible "article" about it that pissed me off.

Tinuvial posted on Feb. 13, 2017 at 10:22 PM
I agree, the tweet is really too vague to be definitive one way or the other. Also, as SuperPat pointed out, it could be for the crossover/Elseworlds thing going on. It could even be none of the above, but more a fan art commission or some such thing.

In other words, Boosterrific, I support your decision to keep quiet until you had more information...or until someone else did something that ticked you off. (Hey, we've all been there, just keep trucking!)

Freytaw posted on Feb. 13, 2017 at 10:58 PM
Boosterrific, I completly understand why you didn't post about it earlier.

I'm just seeing the other side of the coin. I am pretty sure if you did, because you are not CBR or likewise, you would have put the good words in your article and broke the false hope before CBR (and likewise) made it happen (even for Ariel here, maybe ?).

Because you are totally right about CBR. And we all know here, that your are not like them.
Either way, thanks to you, now we know we don't have to be too much excited about it, yet. ^^

Changing of the Gold

It's nice to hear Bader praising Tom Everett Scott for having fun with our favorite hero on Batman: Brave and the Bold. For many, Scott remains the ideal Booster Gold after his excellent performance in Justice League Unlimited's "The Greatest Story Never Told." Let's see if Bader can change some minds.

You'll find more information about Justice League Action at NerdRepository.com. (Thanks to Morgenstern for reminding me about this post.)

SF Debris started the week with a pointed but loving critique of the greatest episode ever animated of Justice League Unlimited. (Can you believe it's been almost 12 years since it first aired?)

Despite including the interesting footnote that the episode was originally intended as a Firestorm story, SF Debris somehow failed to credit the episode's writer, Andrew Kreisberg, or director, Dan Riba. Oversight corrected.

You can see the whole video yourself by visiting sfdebris.com. Thanks to Morgenstern for the link.