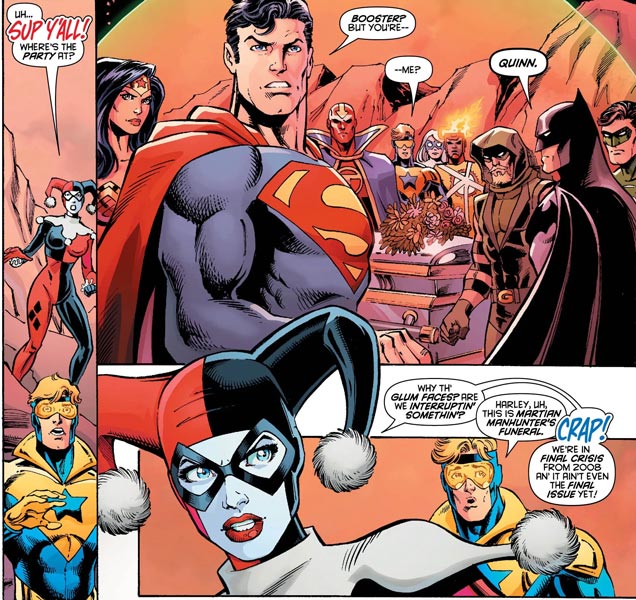 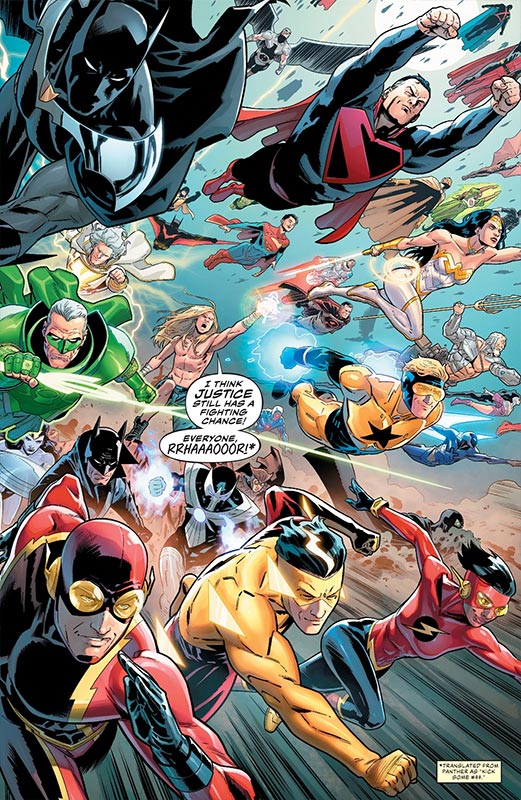 Time Flies When We're Having Fun

Here's something I missed in the run up to Comic-Con: a teaser poster for DC's Year of the Villain event!

You probably can't see him, but Booster Gold is in there, right between Flash and Wonder Woman!

This ad was released online in July and appeared in all DC imprint comics published this week. (Does anyone recognize the artist? Drawn by Nick Bradshaw, inked by Cully Hamner, and colored by Hi-Fi Designs.) It specifically teases the first storyline in the upcoming Batman/Superman #1.

Booster's inclusion here shouldn't come as a surprise, as he had already been linked to the issue in May's DC's Year of the Villain Special. I guess we'll have to buy Batman/Superman #1 — in stores August 28 — to find out if Booster is truly among the "Secret Six" victims of the Batman Who Laughs.

In very related news, Jonathan Reichman pointed out that this week DC announced six new series to tie directly into the Batman/Superman series and four (and counting) Tales from the Dark Multiverse one-shots. One of those stories hints bad things for our hero.

Per the press release from DCComics.com:

TALES FROM THE DARK MULTIVERSE: INFINITE CRISIS #1
Writer James Tynion IV (Justice League, Justice League Dark) and artists Aaron Lopresti (Wonder Woman) and Matt Ryan (Damage) team up with cover artist Lee Weeks for this dark turn on DC’s mega-event Infinite Crisis. The destruction of Superman, Batman, and Wonder Woman, the rise of Alexander Luthor and Superboy-Prime, and the rebirth of the Multiverse all began with Ted Kord, the Blue Beetle. Kord saw it all coming and died with secrets that could have saved the world. But in the Dark Multiverse, Blue Beetle survives, and with the death of Maxwell Lord by his hand, Ted sets off events that irreversibly alter the lives of not only the Justice League, but also his best friend, Booster Gold. In trying to prevent a crisis, Blue Beetle becomes the crisis, and the Dark Multiverse will never be the same.

Thanks for warning us that was coming, Jonathan. Let's see if we learn more when DC releases November solicitations (probably next week).

Shawn posted on Aug. 16, 2019 at 9:29 AM
I think the artist is Chris Sprouse at least it looks like it. We know 5 of the Secrect Six through solicitations and the final issue of the Batman who Laughs, Shazam!, Supergirl, Hawkman, Blue Beetle (Jaime) and James Gordon. So one spot left, Booster, kinda hope not.

Boosterrific [Official Comment] posted on Aug. 16, 2019 at 10:40 PM
Good call, Cort. Comics-now.com identifies the artists as Nick Bradshaw, Cully Hamner, and Hi-Fi. Confirmed on Twitter. I will update the post.

Digging up the Past at Al Baleed 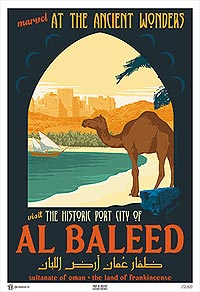 Last week I got a tweet from Brian Miller, who you may know as @hificolor or the colorist on Booster Gold, volume 2.

June 12 — @boosterrific Not comic related, I created art for an archaeological dig. Appreciate if you tweet or blog about it. http://igg.me/at/frankincense

While this isn't strictly comic related, what could be more Boosterrific than a Booster Gold artist trying to raise money through merchandising? Of course I'll blog about it!

Visit Miller's campaign at indiegogo.com to find out where in the world Al Baleed, Oman, is and why anyone should want to be digging there. Contributors who pledge $30 or more to help the archaeological excavation before July 5 will receive a 13" x 19" lithograph (pictured at left) created and signed by Miller.

Get yourself a neat-o piece of art and give to a good cause — science! What more could anyone ask for?

Finishing up this week of long-overdue professional fan art posts is this gem coming out of Phoenix Comicon last month. This one I intentionally held it until the end of this week in order to coincide with the annual Superman Celebration now underway in Metropolis, Illinois. 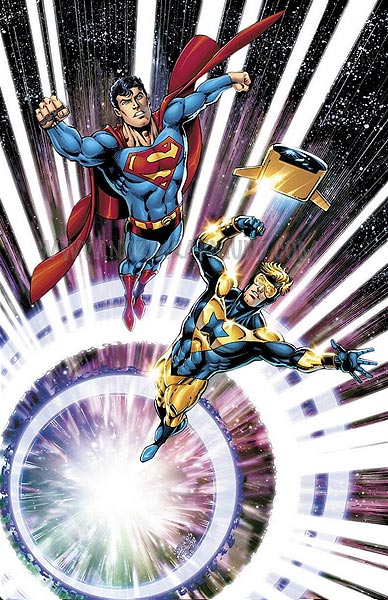 According to Norm Rapmund, who posted this image to his Twitter media gallery, this bit of art was something that he and Dan Jurgens did "for fun." Jurgens did pencil art that Rapmund finished with inks and Brian Miller (aka Hi-Fi Designs) provided color. What a super team!

You can find a larger, better version of this image (and a pre-colored b&w copy of the inks) at Twitter.com/NormRapmund.

BPatrick posted on Jun. 8, 2013 at 3:00 PM
Oh wow. That is a beautiful picture. I attended Phoenix Comic Con and didn't realize something as awesome as that was available.

Instead, I went to the one panel that had Booster Gold in the title and the presenter never showed up!