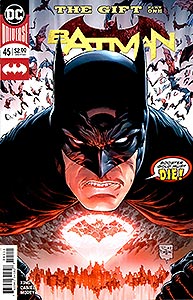 Issue Summary: After witnessing Green Lantern commit suicide on a dare, Booster Gold decides that he and Skeets should go find Batman. Discovering that the Bat Signal has been destroyed, Skeets and Booster create a makeshift signal that summons a Batman, just not the one they were looking for. This Batman is a very well-armed Dick Grayson who shoots first and asks questions later.

Booster escapes Grayson and literally crashes Bruce Wayne's party where he explains that he changed the timeline to save Wayne's parents as a wedding gift. Booster expects Wayne to recognize that this altered timeline isn't for the best and willingly allow Booster to restore history. Instead, Wayne destroys Skeets so that history cannot be further altered. Wayne returns to his party leaving Booster to question what went wrong with his plan.

This story has been reprinted in:
Batman Volume 7: The Wedding (2018)

Page 3, panel 5
ALTERNATE REALITY: As if we couldn't tell that this was an alternate timeline after watching Green Lantern Hal Jordan, apparently under the Joker's influence, kill himself in the skies over a burning Gotham City, Booster Gold's reaction to it should certainly clue us in. In all his many adventures, Booster has never before expressed any eagerness or excitement over the loss of a human life. (Even before his best friend Blue Beetle was killed with a gunshot to the head in Countdown to Infinite Crisis [2005], Booster wasn't exactly enthusiastic about the suicide of a vampire in Justice League International #25 [1989].)

Page 4, panel 3
Skeets tells Booster "this is the worst thing you've ever done." Though what "this" is isn't immediately clear, Booster does have his share of lowlights. He created his own villain to defeat for fame and fortune in 52 Week 6, and he later used his own corpse to hide from his enemies. And, of course, he did start his career by stealing a uniform and time machine.

Page 6, panel 5
POWER UP: Booster and Skeets combine to form a makeshift Bat Signal. Via creative use of his Booster Shot energy beam, Booster casts Skeets' shadow on a cloud like a long-range flashlight.

Page 7, panel 1
POWER UP: Booster Gold survives a potentially fatal grenade hit to his back thanks to Skeets having "reconfigured" his costume to add armor. While Booster's current Mark I.v2 armor boosts his strength, it has never been especially sturdy. For example, the original was destroyed in his first battle with Doomsday in Justice League America #69 , and the modern suit was disabled during Darkseid's attack on Daxam in Booster Gold Volume 2 #32.

Page 8, panel 5
Batman — Dick Grayson in this alternate timeline — shoots Booster Gold in the face with automatic rifle. Skeets did not armor Booster's chin, so our hero presumably activated his force field (though that isn't shown in the art or indicated in the dialog).

Page 10, panel 2
Skeets makes a fart joke. Well, this issue is full of firsts, isn't it?

Page 12, panel 1
Batman justifies repeatedly trying to kill Booster Gold (who doesn't seem to exist in this timeline) because he "could be Jokered." Since it would seem that anyone could be "Jokered," does this Batman just go around killing everyone? This issue isn't interested in answering these sorts of questions.

Page 13, panel 5
HIS STORY: Booster takes credit for programming Skeets, or, more accurately, downloading Skeets' programming "from that site everyone uses." It is not clear what he's talking about, nor when this might have happened in Booster and Skeets' continuity, though the gap from the time he stole Skeets and the time he joined the now defunct "New 52" incarnation of the Justice League International remains largely unclear in the wake of Flashpoint and Convergence.

Page 18, panel 4
After crashing Bruce Wayne's birthday party, Booster references "For The Man Who Has Everything...," a story written by Alan Moore in the 1985 Superman Annual #11. The story has been adapted into other media, including cartoons and television episodes. In that story, Superman envisions an idyllic life in which his parents had never been killed.

Page 18, panel 7
POWER DOWN: Unless something has changed since Booster's appearance in Action Comics #996 (published only two months prior to this issue), Skeets does not have "a little time machine in him." Skeets generates a chronal field that interfaces with the time circuitry of Rip Hunter's various time machines, but cannot travel through time of its own accord. Does Booster not know or understand this, or his misleading (or intentionally lying) to Bruce Wayne?

Page 20, panel 1
SPOILER WARNING!: Learning that Booster Gold has changed time to make all his dreams come true, Bruce Wayne destroys Skeets (and the "little time machine in him") to prevent Booster from correcting history. Skeets is destroyed often (a tradition first beginning in Booster Gold Volume 1 #2 and as recently as (Action Comics #997). Reveal

Page 20, panel 5
On page 15, Martha Wayne says that the party at Wayne Manor is in celebration of Bruce's birthday. Here, Bruce says it is his parent's anniversary party. Was Bruce born on his parent's anniversary? Or is this timeline unstable?
(Footnote: On April 19, 2018, Tom King admitted to this being his mistake on Twitter, saying "We fixed it for digital and the trade." When the second printing was issues on May 16, 2018, all references to Bruce's birthday had indeed been changed to indicate that the event was indeed the Wayne's anniversary.)