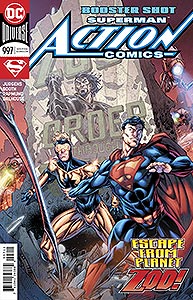 Cover Description: This book has two covers, only the "regular" cover by Brett Booth and Norm Rapmund features Booster Gold (with Superman).

Page 2, panel 1
The fifth part of the "Booster Shot" story is the first episode not to start exactly where the previous story ended. Though Booster Gold and Superman (and Skeets) are still on Jekull forty years in the future, when last we saw them, they had been downed by the Eradicator and Lor-Zod. At the start of this issue, both heroes are still up and fighting.

Page 3, panel 5
The Eradicator chastises Booster Gold because "a time-traveler should know there is no such thing as never." He's wrong. Booster was very nearly killed by the entropy at the end of time in Time Masters: Vanishing Point (also written by Dan Jurgens).

Page 4, panel 1
As seen in the previous issue, Booster Gold is defeated by the Eradicator.

Page 13, panel 2
Booster and Superman have been prepared for a public execution by Zod, his wife Ursa, and his son, Lor-Zod. This is Booster Gold's first meeting with Ursa.

Page 15, panel 2
SPOILER WARNING!: Skeets (who was not restrained like Booster Gold and Superman) is destroyed by Zod for daring to challenge the assessment of history. Skeets has "died" several times, the first time in Booster Gold Volume 1, #2 and again as recently as Booster Gold Volume 2, #41. Reveal

Page 18, panel 5
POWER UP: Although Superman says Booster's force field will "fold in seconds," it is impressive enough that it's able to withstand the mighty onslaught of simultaneous heat vision from 4 Kryptonians for any time at all.

Boosterrific Review: I usually complain when stories feel shorted (6 of 20 pages in this issue are dedicated to the "B" plot of Lois' family), but not today. The fights in this issue are appropriately plotted considering the power of the combatants, and just the right amount of time is spent on Zod's grievances to establish him as a truly evil villain. I eagerly look forward to the next issue.