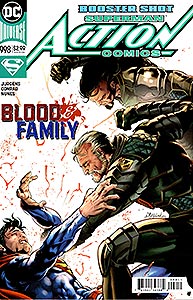 Page 1, panel 1
POWER UP: Maintaining its general trend, this story starts exactly where the previous issue ended with Superman and Booster Gold facing execution by heat vision courtesy of General Zod, his son Lor-Zod, and his wife Ursa. Only Booster's force field has saved them to this point.

Page 3, panel 8
It's funny, but I hadn't noticed until now just how much the heads of those Kryptonian Eradicator robots resemble shiny footballs....

Page 8, panel 3
POWER UP: Skeets duplicates its own operating system into multiple units simultaneously, coordinating their attacks. Considering the Internet of Things that exists in 2018, that's a pretty incredible power. Skeets could be in your toaster right now.

Page 9, panel 1
Booster's not above playing dirty. He threatens Zod's life with a shard of Kryptonite. Lor-Zod calls his bluff but Ursa takes him seriously. Why? What does she think is going to happen? Does Superman normally pal around with murderers? Whatever the case, threatening a Kyrptonian with kryptonite... that's pretty gangsta, Booster.

Page 10, panel 4
LIQUIFIED TIME: Booster tells Superman that only the past is "solidifed" time. "The future is liquid." The problem with this explanation is that to a time-traveler, there is no practical difference between the past and future. It's all relative in an continuous string of causality. Booster himself is from the 25th century. Shouldn't that mean that nothing that Superman does can change any of Booster's history? And if that's true, Booster shouldn't be able to change any history that would affect people in his future.

Page 11, panel 6
Booster, Superman, and Skeets return to Krypton at the moment of its destruction to witness the death of his mother and the "theft" of his father.

Page 14, panel 6
DC Comics fans know that Alfred is the butler of Bruce Wayne (Batman). Jarvis is the butler of Marvel Comics' Tony Stark (Iron Man). Jarvis plays a key role in the top-grossing Avengers movies, but those wouldn't exist in the DC Universe. Therefore, it seems likely that Booster has met Iron Man (and maybe even Jarvis) in an as yet undisclosed inter-company crossover!

Page 16, panel 3
Booster and Skeets visit war-torn Logamba. Though the country of Logamba has played a role in the Lois Lane subplot of this story, it is never clear where in the world Logamba is supposed to be. The unstable third-world country has jungles and a city. It is ruled by a king. Its citizenry is dark-skinned and the only woman seen wars a full body covering. This implies Logamba is in Africa. However, we also know it is within about 2,500 miles of Metropolis (the range of a C-130 cargo plane, as seen in Action Comics #995) and can be reached within a half day. That's not nearly far enough to cross the Atlantic Ocean. So, somewhere in the Caribbean?

Page 17, panel 5
SPOILER WARNING!: Despite being told that Superman's family has been killed, Booster travels back in time to save them. According to Booster's explanation of "solid" and "liquid" time earlier in this issue, this should not be possible (unless he meant that time was fixed for Superman, but not for Booster himself). It is implied that Booster will be made to suffer consequences for this decision. Punished by whom? Will we ever see this? Reveal

Page 20, panel 3
Back at the Justice League Watchtower, Booster teases the Flash about changing time. It was implied after the events of Flashpoint that only Booster and Flash (actually several Flashes) remembered the changes that were made to the old DC Universe.

Page 20, panel 4
Booster and Skeets depart for "the Center." What could that be? Last we heard, Booster was headquartered at Vanishing Point.

Boosterrific Review: I liked it. Mostly. Booster's relationship with Superman and Skeets was a lot of fun. The action was good. But that the story didn't answer very many — if any — of the time travel questions that it raised left me less than completely satisfied.