“The Boys of Summer” 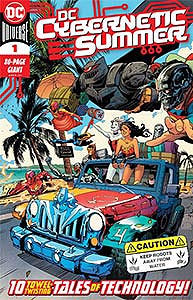 Cover Description: Many of the DC Universe's robots and cybernetic characters head for the beach. (No Booster Gold, but Skeets!)

Page 25, panel 1
After a long absence, Booster Gold and Blue Beetle are back in action together (with Skeets!) foiling a bank heist.

Page 25, panel 6
FASHION ALERT: To celebrate a job well done, the duo hit the beach without masks but in Booster Gold and Blue Beetle-themed beach apparel. Does no one have a secret identity anymore? 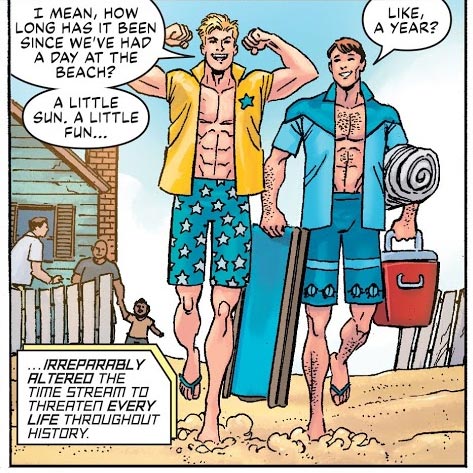 Page 26, panel 5
Finding the beach too crowded for their tastes, the pair decide to time travel back a year to when the beach was empty. This is the first appearance of a one-man Time Sphere, but someone in the crowd already recognizes it. I wouldn't trust that guy.

Page 27, panel 6
A PAIR OF DOCS?: Despite going back in time to a day before the last time they were at the beach specifically to avoid creating any time paradoxes, Booster and Beetle are soon joined by a future version of themselves (plus one year) who had the exact same idea but got their dates wrong...

Page 28, panel 5
...and another future version of themselves (plus ten years) who had the exact same idea but also got their dates wrong...

Page 29, panel 3
...and another future version of themselves (plus twenty years) who wanted to revisit the day their three sets of younger selves interacted at the beach. Since this pairing clearly remembers the events of the day they have traveled to, it would indicate that there is no actual paradox here.

Page 30, panel 1
The four sets of Boosters and Beetles decide to play a game of beach volleyball to the song "Playing with the Boys," which features prominently in the soundtrack of the 1986 movie Top Gun, specifically in a scene featuring a beach volleyball match. (Perhaps not-so-coincidentally, the first issue of Booster Gold is cover-dated 1986.)

Page 30, panel 2
Mid volleyball game, a fifth future version of Blue and Gold (plus thirty years) arrive to warn their four sets of younger selves of danger to come...

Page 31, panel 7
...whose attack was eagerly anticipated by a sixth future version of Blue and Gold (plus forty years) celebrating the fiftieth anniversary of their friendship.

Page 32, panel 8
Needless to say, six Booster Golds and six Blue Beetles (and six Skeets!) are more than enough to defeat one King Shark, who vows revenge. According to Skeets, King Shark will get his avowed revenge, which will be revealed in a future story.

Boosterrific Review: Beaches, bromances, and time paradoxes, oh my! What's not to love?