The Story of a Story

Here's an interesting footnote in the adventures of Booster Gold.

THE PULSE: Out of all the superhero cartoons that have come and gone, what do you like the best about JLU?

OSWALT: The wide-ranging aspect. Also, they don’t just focus on the Big 5. I also like what they do with the villains. I wish they’d just do an Injustice Society cartoon. Wow!

THE PULSE: That would be cool. What is your JLU story about? How did you get involved with doing a story for that imprint?

OSWALT: Well, I tried out to be the monthly writer, but they thought a lot of my story pitches blew. But there was one they liked, which involves Booster Gold and The Atomic Knight. So that’s the one I’m doing.

THE PULSE: Out of the zillions of heroes in the JLU universe, how did you settle on Booster Gold and the Atomic Knight?

OSWALT: I thought of the kind of story I’d like to tell first, and then went through my old Who’s Who and figured out who’d be the best characters to tell that story emotionally. We’ll see.

As we all know by now, we didn't see. Justice League Unlimited was cancelled in 2008, never having included any story crossing Booster Gold with the Atomic Knights. But Oswalt is very correct that it would make a great pairing.

Every Booster booster knows that Booster Gold arrived in our "present day" on August 20, 1985, a date our hero selected in part because it occurred before a nuclear conflict of the late 20th century (Booster Gold #14). But what you may not have realized is that the nuclear war of Booster's future history was better known as The Great Disaster of the DC Universe, and according to the heroic Atomic Knights, it happened in October 1986 ("Rise of the Atomic Knights", Strange Adventures #117).

Given that the goal of the Atomic Knights was to rebuild society after the disaster, a crossover story between them and future rags-to-riches success story Booster Gold would be a good story set-up!

In hindsight we know definitively there was no nuclear disaster in the DCU in 1986. Superman discovered that the original stories of the Atomic Knights were all fictional simulations (in DC Comics Presents #57, 1983), and the post-Crisis on Infinite Earths Atomic Knights would go on to aid the city of Bludhaven after a scaled-down nuclear event in Crisis Aftermath: Battle for Bludhaven — a mini-series drawn by Dan Jurgens!

Will we ever get to read Oswalt's story? Only time will tell.

George Morrow posted on Apr. 13, 2022 at 2:39 AM
Thanks for sharing my article. I only had the faintest recollections of the original interview (the wayback machine is a godsend) but it seemed like such a missed opportunity for the JLU comic to not use a Booster Gold script from Patton Oswalt.

This Day in History: Shocked and Appalled

Thirteen years ago today, Booster Gold stood in front of the nation and accused the United States government of failing to protect its citizens in the pages of Haven: The Broken City #5.

Booster's been doing this sort of grandstanding for years. He might not be a politician himself, but he loves the spotlight as much as any Senator. Stick a microphone in his face, and he'll talk 'til your ears fall off.

Over the years, we've seen him call press conferences to denounce Superman and praise Manhunters. By comparison, publicly accusing the U.S. Commander-in-Chief for ignoring an alien invasion is practically patriotic.

Taylor posted on Apr. 17, 2015 at 8:29 AM
So Booster pulled a 'Kanye West' before Hurricane Katrina? I knew he used time-travel to save people, but had no idea he had used it to one up Kanye. Nice.

If You Haven't Seen it Yet

"What type of gold means certain death for Jonah Hex?" 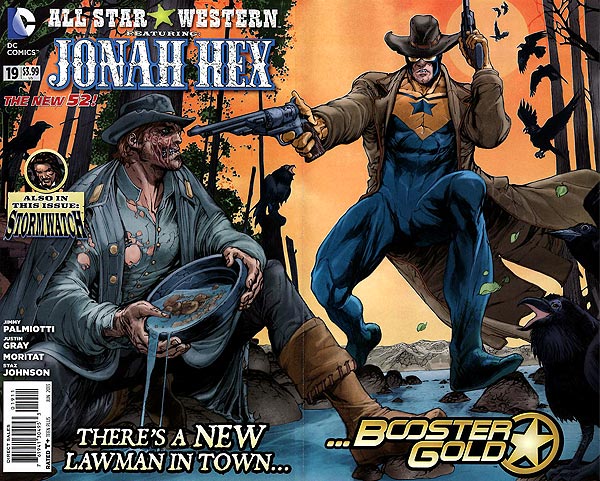 ComicBookResources.com released this cover on Friday. You can see a bigger version of this pic on their site here. You can buy a copy of the book this cover is attached to when the book hits stands on April 24, 2013.