JLA: Welcome to the Working Week 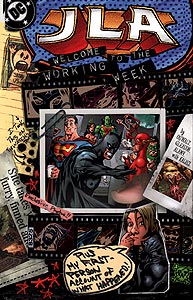 Cover Description: Photographs and film negatives of the Justice League are arranged in a collage with newspaper clippings, notes, and doodles. (No Booster Gold.)

Issue Notes: This issue is a one-shot written by comedian/actor/writer Patton Oswalt.

Story Notes: The title to this comic is also a song performed by Elvis Costello.

Page 32, panel 1
FASHION ALERT: Booster is wearing a facsimile of his original, classic costume. A costume of this type was last seen in the pages of Secret Files & Origins of the DC Universe 2000 #1. From this point forward, Booster will continue to wear this costume, abandoning his previous, asymmetrically designed power-suit.

In his only appearance in this issue, Booster Gold is among the heroes attending Plastic Man's party on the Justice League's moon Watchtower. Booster is speaking to Guy Gardner and appears to be sitting with Ice Maiden I. Other heroes identifiable in the panel include Adam Strange, Animal Man, Bart Allen (as Impulse), Batgirl II, Baytor, the Black Racer (outside the window), Blue Beetle II, Ganthet, Jakeem Thunder, Nightwing II, Robin III, Spoiler, Stargirl, Starman VII, Steel III, Superboy III, Ultra the Multi-Alien, and four members of the Inferior Five (Awkward Man, The Blimp, Dumb Bunny, and Merry Man). Also at the party, but not pictured with Booster Gold, are Ambush Bug, the Heckler, Plastic Man, and Poison Ivy. (This party was thrown in order to lure and capture Ivy, who had been pulling a string of "party riots" to cover thefts.)

Boosterrific Review: Actor, stand-up comedian, and writer Patton Oswalt takes an unusual look at the daily lives of the Justice League in this one-shot issue. Oswalt's refreshing yet reverent vision of life behind-the-scenes for various Leaguers is ably supported by the solid (if unusually well-endowed) art of Pat Gleason. This issue is solid fun for JLA fans everywhere.